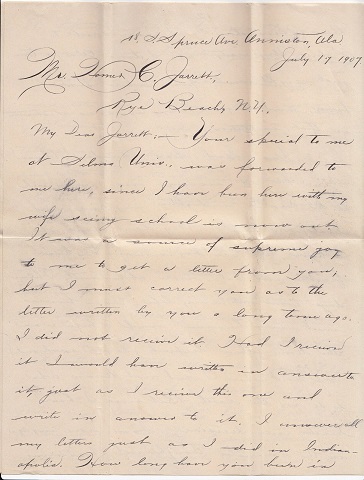 On offer is a super pair [2] of original 1907 manuscript letters handwritten by African American Professor S. R. W. Smith of Selma University, [originally named the Alabama Baptist Normal and Theological School it was officially changed to Selma University in 1908], which was founded in 1878 to train African Americans as ministers and teachers. The letters are addressed to his 'life-long friend' Homer C. Jarrett of Rye Beach New Hampshire from Anniston and Johns Alabama. Smith who describes himself as Professor of Mathematics, Mental and Moral Science, and Commercial Law writes 10 pages all told, one dated July 17, Anniston Ala., the other Aug. 22 Johns, Ala, wherein he provides a significant look into his efforts and attempts at bringing students to the University and his appreciation of the guiding hand and the results. Here are some snippets: "Yes God has abundantly blessed me. He is using me as much as he can to enlighten my race and elevate my people." "...I began a two-month summer tour of lecturing and preaching and soliciting for Selma University....My work in this capacity is to talk up an interest in our school..." "We have a corps of 19 teachers and enrollment of about 700 students. The general Education Board of New York has promised us three thousand dollars on condition that we raise $3000 of the Baptist Brotherhood." "The cry of an oppressed race appeals to those who can and will to aid in it emancipation from the bondage of ignorance and superstition." Overall VG.

Title: 1907 ORIGINAL PAIR [2] OF MANUSCRIPT LETTERS HANDWRITTEN BY AN AFRICAN AMERICAN PROFESSOR OF MATHEMATICS AND MORAL AND MENTAL SCIENCE DETAILING HIS DEDICATED EFFORTS TO BRING MORE STUDENTS TO THE UNIVERSITY