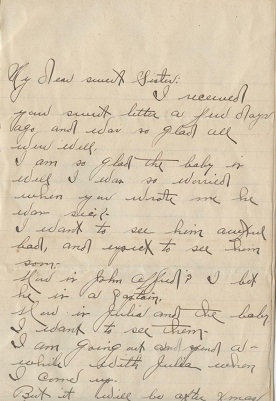 On offer is a super, modest archive of manuscript letters, ledger/invoice sheets and poetry relating to the Howle family of Wetumpka Alabama. The small but fascinating group is an interesting peek at life in rural Alabama from the late part of the 19th Century to early in the 20th. All told there are five letters: three postmarked Eclectic Alabama, 1897 - 1898 to Mr. Howle, one from Mobile, 1910, to Mrs. Howle [from her sister] and the fifth letter, Oct. 1901, being a forlorn multipage letter from a bereft Mrs. Howle to her husband in El Paso. [She is incredibly lonely and wonders why her husband can enjoy El Paso but refuses to let her to join him as she will not have fun. There is a rather interesting undercurrent in her beseeching tone that Women's Studies students might find of interest running between the lines.] There is a 4 page handwritten invoice for many, many items written out on a Howle Brothers store printed billhead. It is dated 1918. There are two multi-page manuscript "love" poems or "courting" poems found with the Howle papers. One of them is signed we believe with the initials: St. B. Perhaps these were sent to a Howle daughter as one is addressed "Miss". Then there is a single page pencil genealogy table beginning with Colonel Thomas Marshall family [noted as Grandmother's Father] whose biography was, as noted in pencil, written by Senator Aldrich [this note is confused as the Senator was named Albert Beveridge]. Overall G.

Title: 1897 - 1910 ORIGINAL MODEST ARCHIVE OF CORRESPONDENCE AND EPHEMERA TO AND FROM THE HOWLE FAMILY OF WETUMPKA AND ECLECTIC ALABAMA