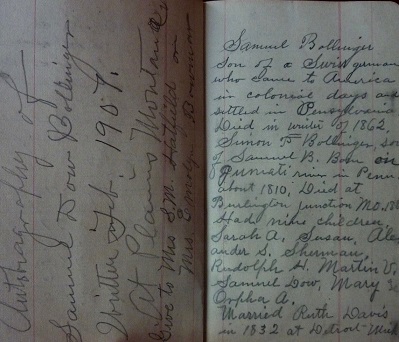 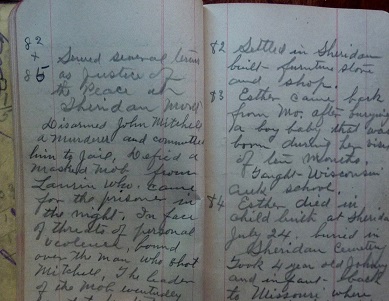 On offer is an original, significant historic record of late 1800s and early 1900s pioneer and western life being the original handwritten manuscript diary of a fascinating and eclectic Montana pioneer whose many job titles included lawman, judge, Civil War veteran, teacher, miner and newspaper editor Samuel Dow Bollinger [1848 - 1917]. The 3½ x 6 inch 40 page book begins in 1907 [though much is retrospective] with annual entries through 1917. [The last two entries of 1917 seem to indicate he was ill and likely died about that time.] The first page or so gives history of his parents who had come from Pennsylvania writing entries covering his birth through the rest of his life and a very interesting life and one uniquely reflective of the times in which he lived. In the early 1860s he worked for a couple newspapers in Ottumwa; The Courier and The Mercury from 1866 - 1869 Bollinger and he also served with the US Army in the Dakota Territory. After the army Bollinger headed to Missouri, marries his first wife and then in 1880 he moves to Montana where he joins the Odd Fellows Lodge at Virginia City. He did some freighting work for the railroad became justice of the peace at Sheridan County. He details several accounts of criminals that he encountered. Later he became an itinerant teacher at several different locations. In 1889 he founded and published a newspaper at Pueblo Colorado called "The Pueblo Democrat" - he adds that his partner W.G. Jackson who "beat him out of his interest and then let the paper die", runs for Supt. of Schools in 1890; in 1894 he is in Cripple Creek doing some mining and also working with a newspaper and publishing the "Daily Crusher"- then back to Missouri and then back to Montana in 1898 as Justice of the Peace again in 1904 at Sheridan County and the in 1913 he goes to Arkansas where it appears his life ended. Here are some snippets: Inside front cover: After I'm dead send the book to Emolyn Bowman or Mrs S.M. Hatfield Samuel Dow Bollinger, Fifth Son of Simon P Bollinger and Ruth Bollinger Davis Born at Ottawa Iowa Oct 22, 1848; Earliest recollection 1852 cut off sister Mary's Finger. 1852-1862 Helped father at carpentering and furniture making educated at public schools and private college in Ottawa. 1862-66 Worked at printing "Mercury" and "Currier "offices in Oltuwna. Walked to Dallas Co Iowa 125 miles and spent summer with uncle George Hills, returned in fall and had first R.R. ride for Pella to Ottuma 60 miles. 1866 Drove an Ox train from Ottawa to Hamburg 1869 Worked passage on boat from New Orleans to La Grange MO than walked to Kirksville MO. 1866 Went to Hawsburg Iowa 200 miles in company with mother and sister Susan and her husband Ehias P Day worked on first issue of "Fremont Co Times" Published by Eaton Brothers. Went to Caldwell co Mo thence to Ottawa on foot. 1866-69 Served three years in US Army CO E 10th infantry at 71 Wadsworth now in N Dakota. 1870 Broke prairie with four yoke of oxen in Adams Co Missouri built frontier shop at Shars Mill and thought school at Ball Knob district 1871 Married to Mary M Vanlaningham 1872 Bought 40 arches of brush land, taught school and cleared land until 78. 1881 Man killed by lighting near Sheridan found corpse in a box just as he been pecked up took him out washed and shaved him got clothes and coffin at county expense and buried him decently. 1882 Settled in Sheridan built frontier store and shop Esther came back from MO after burying a baby boy that was born during her visit of ten months. 1882 -1885 Served several terms as Justice of the Peace at Sheridan Montana disarmed John Mitchell, a murderer, and committed him to jail. Defied a masked mob from Laramie who came for the prisoner in the night in face of threats of personal violence, turned over the man who shot Mitchell the leader of the mob eventually sent to prison. [From the Great Falls Genealogical society: MITCHELL, John, Laurin, MT shot Daniel Kane, Mitchell was killed soon after he reached Sheridan, MT, March 12, 1885. 1888 -Bad Man of the plains rode into the post office in Stuart issued warrant constables afraid Arrested him myself and committed him to Los Amias jail for 90 days broke up gang.' Overall G+.; Manuscript; 12mo - over 6¾" - 7¾" tall; KEYWORDS: HISTORY OF, SAMUEL DOW BOLLINGER, MONTANA, PIONEER, LAWMAN, WILD WEST, VETERAN, TEACHER, MINER, NEWSPAPER EDITOR, OTTUMWA IOWA, SHERIDAN COUNTY, DAKOTA TERRITORY, PUEBLO COLORADO, THE PUEBLO DEMOCRAT, MONTANA TERRITORY, WESTERN LAWMEN, GENEALOGY, AMERICANA, HANDWRITTEN, MANUSCRIPT, DOCUMENT, LETTER, AUTOGRAPH, WRITER, HAND WRITTEN, DOCUMENTS, SIGNED, LETTERS, MANUSCRIPTS, HISTORICAL, HOLOGRAPH, WRITERS, AUTOGRAPHS, PERSONAL, MEMOIR, MEMORIAL, AMERICANA, ANTIQUITÉ, CONTRAT, VÉLIN, DOCUMENT, MANUSCRIT, PAPIER ANTIKE, BRIEF, PERGAMENT, DOKUMENT, MANUSKRIPT, PAPIER OGGETTO D'ANTIQUARIATO, ATTO, VELINA, DOCUMENTO, MANOSCRITTO, CARTA ANTIGÜEDAD, HECHO, VITELA, DOCUMENTO, MANUSCRITO, PAPEL,