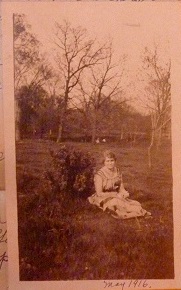 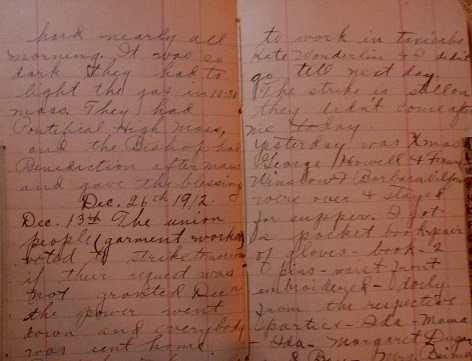 1909 - 1917 ORIGINAL MANUSCRIPT DIARY OF LABOR STRIFE, UNION VIOLENCE AND THE UNEASY LIFE OF A STRIKE BREAKER IN AN IOWA WOOL MILL

On offer is a fascinating, significant group of manuscript relics of a young woman named Mary Sellzer. Mary worked at the Sheuerman Bros Woolen Mill in Iowa as a garment worker. It was not an easy job and not usually an easy environment and could be very rough not to mention ill paid [less than $14 a month in 1912] for women who worked in the Mills in the 1900s. In fact historians and researchers of the subject will know that her diary entries are merely a year after the Triangle Shirtwaist Factory fire in New York City and for the most part one of the most critical eras in Union organization history. In all Mary wrote from 1909 until 1917. She details much of her daily life including her thoughts on international and local events. Her mention of a labor strike that took place and it affects on the Woolen Mill lead us to believe she was a strike breaker but we surmise. Another entry she mentions the death of a fellow worker who died at the age of 33. Here are some snippets: Dec 13th, 1912 The Union people (garment workers) voted to strike tomorrow if their request was not granted by Dec 14th. The power went down and everybody was sent home. Dec 17th Took girls to work in taxicabs Kate Woderlin, and I didn't go until the next day. The strike is still on they didn't come after me today. April 23rd, 1912 Miss Luella Romick died Sat ( April 20th) and was buried today at 9am Mrs Young sang solo " Heaven is my home" The girls from the factory that went are Mrs Reaves, Clara Mathews, Nellie Hensey , Vie Armstrong, Maud Jennings Ella Anderson, Winnie Murphy Fannie Barkley, and Minni Mckee, and myself. She was 33 years old. Jan 30th, 1916 We have about 2 inches of solid ice all over the ground and its impossible to walk The trees all full too. We nearly had another strike last week 2 men got fired. Oct 01, 1917 The streets were just thick with soldiers, all the drafted men are at the camp now Some had only their solider hats and others had their shirts too. Some looked funny. Some looked awful downhearted. Oct 25th, 1917 Lots of the soldiers have left for Deming others for long Island, and some are in France have been for several months, but nobody knows whether they are in battle or not. Camp Dodge is nearly finished and an awful lot of soldiers are there. Nearly all of the first draft has been called. They had the second Liberty Bond sale this week. Everything is terrible high now- a bag of flour 3.00 ten lbs of sugar is 5.00, shoes are from six to ten dollars. Calico 20 cents a yard - most everything has doubled and some things are three times as much as they need to be. Some age toning and wear but overall G.; Manuscript; 12mo - over 6¾" - 7¾" tall; KEYWORDS: HISTORY OF, GENDER STUDIES, FEMALE GARMENT WORKER, SEAMSTRESS, UNIONS, LABOR STRIFE, LABOR RELATIONS, STRIKES, STRIKERS, SCABS, WOMENS STUDIES, PRE SUFFRAGE, MARY SELLZER, WAR YEARS, WWI, WW1, SHEUERMAN WOOLEN MILLS, TRIANGLE SHIRTWAIST FACTORY FIRE, STRIKE BREAKERS, IOWA, AMERICANA, HANDWRITTEN, MANUSCRIPT, DOCUMENT, LETTER, AUTOGRAPH, WRITER, HAND WRITTEN, DOCUMENTS, SIGNED, LETTERS, MANUSCRIPTS, HISTORICAL, HOLOGRAPH, WRITERS, AUTOGRAPHS, PERSONAL, MEMOIR, MEMORIAL, AMERICANA, ANTIQUITÉ, CONTRAT, VÉLIN, DOCUMENT, MANUSCRIT, PAPIER ANTIKE, BRIEF, PERGAMENT, DOKUMENT, MANUSKRIPT, PAPIER OGGETTO D'ANTIQUARIATO, ATTO, VELINA, DOCUMENTO, MANOSCRITTO, CARTA ANTIGÜEDAD, HECHO, VITELA, DOCUMENTO, MANUSCRITO, PAPEL,

Title: 1909 - 1917 ORIGINAL MANUSCRIPT DIARY OF LABOR STRIFE, UNION VIOLENCE AND THE UNEASY LIFE OF A STRIKE BREAKER IN AN IOWA WOOL MILL

1909 - 1917 ORIGINAL MANUSCRIPT DIARY OF LABOR STRIFE, UNION VIOLENCE AND THE UNEASY LIFE OF A STRIKE BREAKER IN AN IOWA WOOL MILL