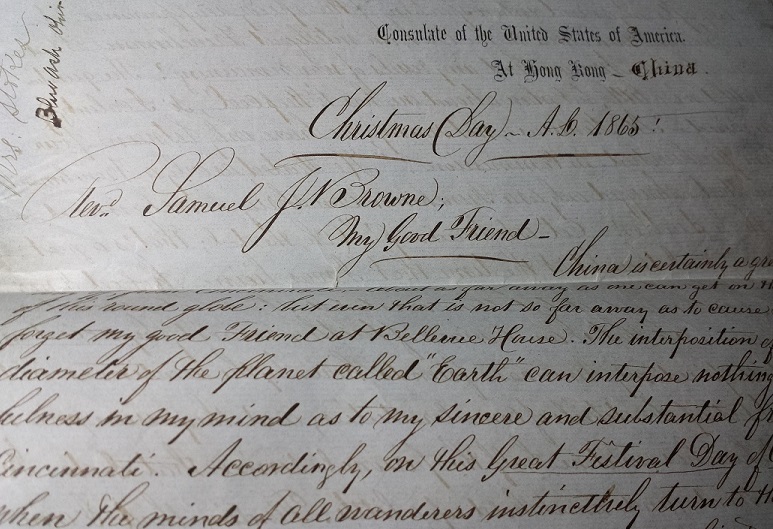 1865 ORIGINAL MANUSCRIPT PAIR [2] OF HANDWRITTEN LETTERS EXHAUSTIVELY DETAILING HIS LIFE AND KEEN EYED VIEW OF CHINA, HONG KONG AND US RELATIONS BY AMERICA'S CONSUL TO CHINA

On offer are two [2] significant, exceptional letters handwritten by I.J. Allen, Consulate of the United Sates of America to China, stationed in Hong Kong. The two letters, one of which is 12 pages in length and the other which is 16, delve into incredible detail about the life and observations of Dr. Allen in China on Christmas Day, 1865, and New Year's Day, 1866. In the first letter, Dr. Allen writes of the "Pagan land" in which he resides. He reflects on the commerce of America, shortly after the brutal civil war that has just ended only six months before. "Since the war closed, American commerce has survived beyond all expectation." Continuing with commerce, Dr. Allen describes his salary and the ways in which he is making money profiting off the merchant ships that are increasingly coming through Hong Kong bay, "flying the flags of every nation in Christendom. "The heavy banking capital is kept here in which the prodigious commerce of the East is conducted." After he concludes his talk on finances, Dr. Allen moves to a gorgeous, detailed, and all together extraordinary account of Hong Kong. "The streets are so many promenades, as smooth and as clean as the elegant avenues in your Spring Grove." "It is with unspeakable delight that one walks out of an evening or afternoon along these winding walks as they meander around and along the mountainside against which the city is built, with the greenest of grass on either side, the pine, the palm, the bamboo and the banyan, rising terrace after terrace and yet so gently, as to be almost imperceptible with streets all as smooth and as clean as the well kept walks of a gentleman's park." He then addresses the holiday on which he writes. "This is Christmas! And i sit writing with open mind, without fire, the morning glories and the oleanders in full bloom, roses and cornelias everywhere...December's as pleasant as May!" Finally, Dr. Allen talks at long length about the religion of the Chinese and the attempt to convert them to Christianity. "They are a nation of atheists," he surmises. "And yet this statement must be qualified by a seeming paradox, that is, that, they have too much religion,- or better, too many religions!" Allen describes the religion around him and the many practitioners of it. He concludes, eventually, that, "the peculiar conditions of the Chinese mind as regards religion is an obstacle almost insurmountable to their conversion to Christianity...They become atheists, not, like our atheists, by rejecting all religion, but, by accepting all religions! The result is a nebulous nothingness as complete as the atheism of those who reach the same condition by an opposite process." The letter ends with pleasantries towards Reverend Brown. The second letter, written only a week letter on New Year's Day, 1866, is an extraordinary document of mid 19th century travel. Allen, in tremendous detail and exceptional prose, describes the last year of his life, leading up to the present day at which he writes. "What a whirligig is time!" he begins the letter. "Ten years ago I was delving among books at College Hill - One year ago (yesterday) I was delving among lances and the etceteras of Maritime Law! What a whirligig is Time!" At 16 pages the letter goes into detail about each stop of the way, from his beginning in New Jersey to his trip to San Francisco by train, to his voyage across the Pacific Ocean, stopping many times along the way, eventually reaching Hong Kong five months after leaving his home state. "My voyage hither was rather a peculiar one in many particulars, but not an unpleasant one. I was long coming - from May 1st to Oct 1st - 5 months - but was unavoidably detained 2 months at San Francisco." The many places he stopped through, including the Sandwich Islands (the islands of Hawaii) - "the most delightful climate, perhaps in the world" - are all described in his flowery and gorgeous prose, in flowing handwriting that is remarkably easy to read. After pages of journey, "at 9am on September 28th by our calendar, we dropped anchor in Hong Kong harbor. I had made the voyage to Hong Kong, 15,744 miles, without a storm and without an accident!" The second part of the letter is written to Rev. Brown's wife, and discusses the women of China and their culture, including their foot binding practice and their clothing and body shape. Finally, the letter ends with Dr. Allen's description of his attempts to get better at the Chinese language and the Chinese attempts to learn English. As with everything in the letter, it's written with brio. The letters are bound by ribbon, and are kept together well. Overall G.

1865 ORIGINAL MANUSCRIPT PAIR [2] OF HANDWRITTEN LETTERS EXHAUSTIVELY DETAILING HIS LIFE AND KEEN EYED VIEW OF CHINA, HONG KONG AND US RELATIONS BY AMERICA'S CONSUL TO CHINA