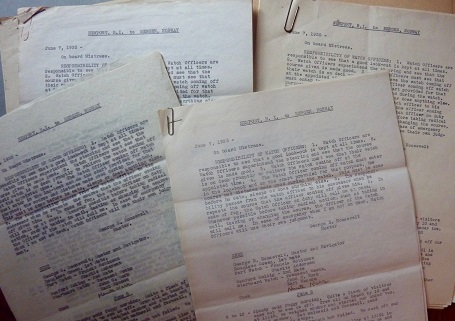 On offer is a super archive of typed ship's logs and scrapbook regarding the noted schooner "The Mistress" dated 1935 - 1947. George E. Roosevelt, President Teddy Roosevelt's nephew, was Master and Navigator of the Mistress and while there are no ownership inscriptions or other identifiers it seems likely this scrapbook was compiled and written by Roosevelt. The Mistress was the former flagship of the New York Yacht Club built in Shelbourne Nova Scotia in 1930 for George Roosevelt. Designed by Sherman Hoyt, she raced her way through the Depression and War years in Long Island Sound, the bi-annual Newport to Bermuda Race, and contests in Europe. The archive includes three original 1935 typed logs describing the tragic 1935 transatlantic Yacht Race from Newport - Bergen Norway. Each day of the race is mentioned in 10 pages of typed manuscript. Minor changes have been made inserted in pencil. Plus two original carbon copies of the same. This log mentions several tragic deaths aboard other yachts in this race. A 1931 original typed log of a trip from Newport R.I. on July 4 to July 23, 1931 11 pages onboard The Mistress" with George E. Roosevelt, Master. Plus one original carbon copy with minor changes inserted in pencil. Another rather interesting typed log or manuscript is a 1947 New York to Panama trip about a Navy vessel. This voyage was from March 31 to April. There is a great 12 x 10 x 6 inch photo of Newsman and officers on board the USS Wisconsin for the Fourth Naval Reserve Training cruise and is captioned. The log of the journey is attached. This includes daily notes and events with navy officers and newspaper reporters as well as the President of the Shell Oil Co. This log was typed on 12 pages on the reverse of each page is letter head from Harris Upham & Co- a famous brokerage firm dealing in securities. Here are some snippets: June 12, 1935 Our cook deserves a few remarks. He is a Dane and admits an age of 51 but looks older. His performance during the two days of heavy weather was marvelous. Hot meals well cooked and promptly served greeted us each time we came below cold and wet. All this time cooking in galley without a breath of ventilation as we of course, were battened down completely during the gale. He feels hurt if one does not eat a lot and will get anything asked for, such as tea instead of coffee etc. Our skipper says this storm would be exceeded only by winter gales or tropical hurricanes. Our cook says that the beating he received was not deserved even by one who murdered his father and mother: and he says he never did that. June 21, 1935 Long 27.20 The sun came out this afternoon and its warmth was most grateful. It soon went behind the clouds and our fingers on the wheel again became numb as they have been for day. Below decks we are warm and the food continues wonderful. our eggs are still good: the bread still fresh; rum ration served at times when tired and cold is far superior to whisky and brandy. Contrary to our course in 1931, we took ice with us this trip and the last of it melted away today and we had our last fresh meat today. Of our 320 gallons of water, we have consumed only 100 so if conditions continue favorable, water will be turned on in the toilet in three days. We so far have used only salt water for washing and bathing. One cup a piece a day for shaving has been allowance of fresh water. BIO NOTES: George Emlen Roosevelt (1887-1963) was a banker and philanthropist, was a first cousin once-removed of U.S. President Theodore Roosevelt and one of the most prominent railroad financiers of his day, involved in 14 railroad reorganizations. He also held directorships in several important companies, including the Morgan-controlled Guaranty Trust Company, the Chemical Bank, and the Bank for Savings in New York. His son Julian Roosevelt was an Olympic yachtsman. Overall G+.

Title: 1935 - 1947 ORIGINAL GROUP INCLUDING LOGS AND SCRAPBOOK OF THE NOTED RACING SCHOONER THE 'MISTRESS'