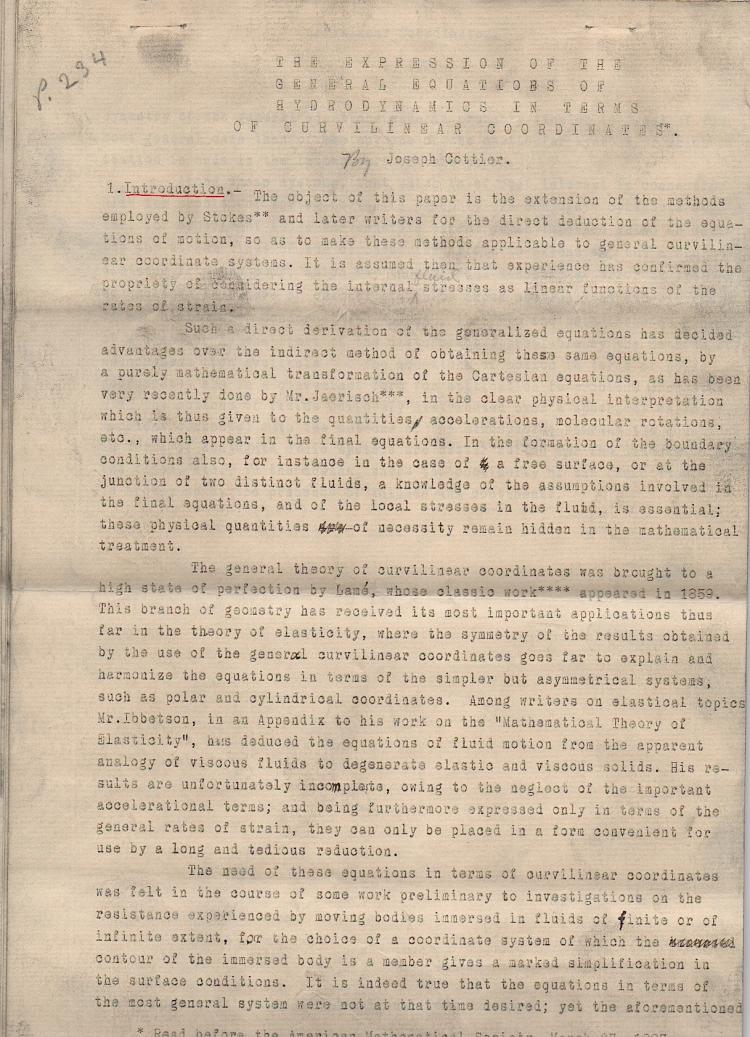 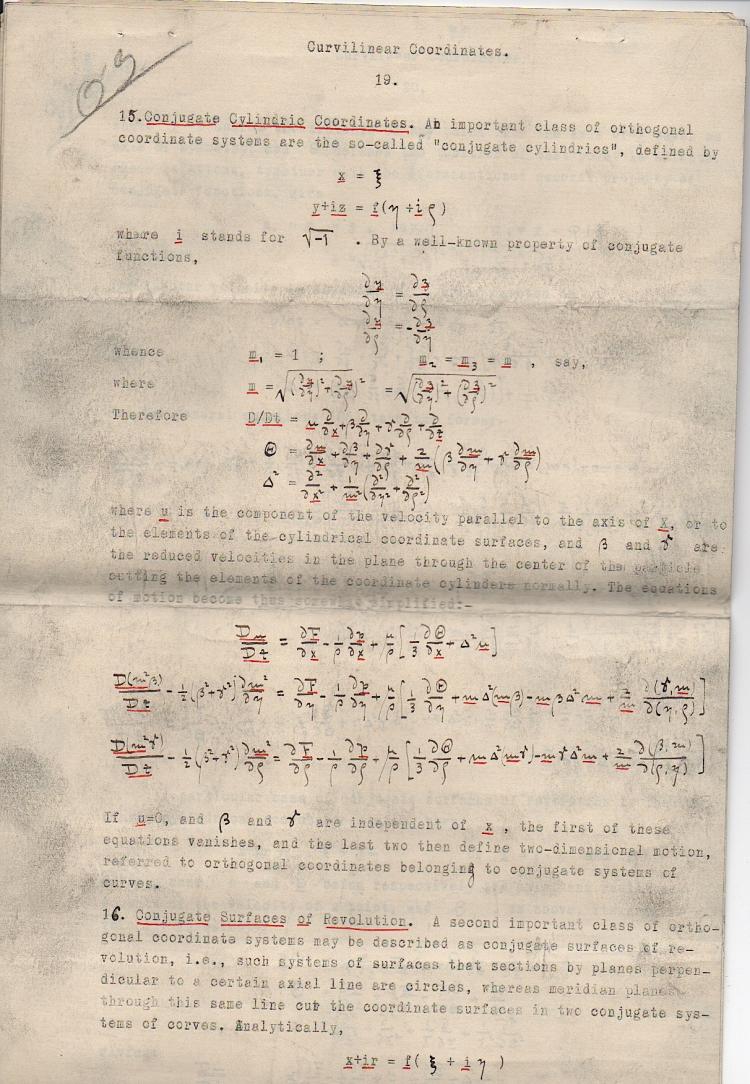 On offer is an original 20 page manuscript, typed and handwritten, by Joseph G.C. Cottier (1874-1897). Titled "The Expression Of The General Equations Of Hydrodynamics In Terms Of Curvilinear Coordinates" which relates to his work and intense study of the science of hydromechanics. Cottier had read and mastered nearly all of the extensive and profoundly difficult literature of this science, which has occupied the attention of the most eminent mechanicians during the past two centuries and this work is part of the fruits of his research. From the personal papers of Robert Simpson Woodward (1849-1924) American physicist and mathematician, born at Rochester, Michigan. He graduated C.E. at the University of Michigan in 1872 and was appointed assistant engineer on the United States Lake Survey. In 1882 he became assistant astronomer for the United States Transit of Venus Commission. In 1884 he became astronomer to the United States Geological Survey, serving until 1890, when he became assistant in the United States Coast and Geodetic Survey. In 1893 he was called to Columbia as professor of mechanics and subsequently became professor of mathematical physics as well. He was dean of the faculty of pure science at Columbia from 1895 to 1905, when he became president of the Carnegie Institution of Washington, whose reputation and usefulness as a means of furthering scientific research was widely extended under his direction. He was elected to the National Academy of Sciences in 1896. In 1898-1900 he was president of the American Mathematical Society and in 1900 president of the American Association for the Advancement of Science. In 1915 he was appointed to the Naval Consulting Board. He died in 1924 in Washington, D.C. Professor Woodward carried on researches and published papers in many departments of astronomy, geodesy, and mechanics. In the course of his work with the United States Coast and Geodetic Survey he devised and constructed the "iced bar and long tape base apparatus," which enables a base line to be measured with greater accuracy and with less expense than by methods previously employed. His work on the composition and structure of the earth and the variation of latitude found expression in a number of valuable papers. Titled and signed on verso, 20 pages, 8 x 13". Soiled. BIO NOTES: Joseph G.C. Cottier (1874-1897) Cottier was a graduate student in Columbia during the academic years 1895-7. The exceptionally rapid progress he made justified the expectation that he would soon become an original investigator of the first order in the domains of mathematical physics. Joseph Germains Charles Cottier was born in Jersey City, N. J., May 29, 1874. He was graduated from Stevens Institute of Technology, with the degree of mechanical engineer in 1894. During the following year he was employed in engineering work, partly by the East River Gas Company of New York and partly by the Blake Pump Company. Although successful in this work, it proved of little interest to him, and he resolved to turn his attention to studies which would lead him to an academic career. Accordingly he applied for and was awarded a scholarship in Columbia University, and he entered the School of Pure Science in the autumn of 1895. He chose mechanics as his major subject and mathematics and education as minors. At the end of the academic year 1895-6 he was appointed fellow in mechanics and received the degree of A.M. Continuing his studies with marked proficiency, he was reappointed Fellow in Mechanics at the close of the year 1896?7, and he expected to complete the work required for the doctorate degree during the present academic year. He had made a special study of the science of hydromechanics. He had read and mastered nearly all of the extensive and profoundly difficult literature of this science, which has occupied the attention of the most eminent mechanicians during the past two centuries. He had already begun to produce original work in this field; and on departing in July last for Europe he left for publication papers on the equations of hydrodynamics in a form suitable for application to problems connected with the movements of the earth's atmosphere, and on the expression of the general equations of hydrodynamics in terms of curvilinear coordinates. The first of these papers has been published in vol. XXV of the Monthly Weather Review of the United States Weather Bureau, and the second will be published in the Mathematical Review. Personally Mr. Cottier was an exceedingly unassuming man, and modest almost to shyness with respect to his own attainments. Because of these characteristics, and by reason of incessant occupation with his studies, few of his associates, and few even of his instructors, came to know him intimately. The few to whom he became well known, however, held him in highest esteem, as well for his singularly gentle and courteous manliness as for the penetrating clearness and strength of his intellectual capacity. It is fitting in this connection to state that Mr. Cottier's parents have given his collection of treatises and papers on the mathematico-physical sciences to the library of the Department of Mechanics. They have thus founded a permanent memorial of their son's devotion to science, and have at the same time shown his and their appreciation of the fellowship honors which Columbia had twice bestowed upon him. [written by Prof. Robert S. Woodward in 1897]. ; Manuscript; 4to - over 9¾" - 12" tall; KEYWORDS: HISTORY OF, JOSEPH G.C. COTTIER, SCIENCE, SCIENTIFIC, HYDRODYNAMICS, CURVILINEAR COORDINATES, COMPLEX MATHEMATICS, OF ROBERT SIMPSON WOODWARD, PHYSICS, ENGINEERING, MECHANICIANS, MECHANICAL, UNITED STATES TRANSIT OF VENUS COMMISSION, JOSEPH GERMAINS CHARLES COTTIER, AMERICANA, HANDWRITTEN, MANUSCRIPT, DOCUMENT, LETTER, AUTOGRAPH, WRITER, HAND WRITTEN, DOCUMENTS, SIGNED, LETTERS, MANUSCRIPTS, HISTORICAL, HOLOGRAPH, WRITERS, AUTOGRAPHS, PERSONAL, MEMOIR, MEMORIAL, AMERICANA, ANTIQUITÉ, CONTRAT, VÉLIN, DOCUMENT, MANUSCRIT, PAPIER ANTIKE, BRIEF, PERGAMENT, DOKUMENT, MANUSKRIPT, PAPIER OGGETTO D'ANTIQUARIATO, ATTO, VELINA, DOCUMENTO, MANOSCRITTO, CARTA ANTIGÜEDAD, HECHO, VITELA, DOCUMENTO, MANUSCRITO, PAPEL,

Title: c1896 ORIGINAL TYPED AND HANDWRITTEN MANUSCRIPT STUDY OF ADVANCED HIGHLY TECHNICAL COMPLEX MATHEMATICS BY A PRODIGY WHO WOULD DIE WITHIN THE YEAR AT THE AGE OF 23