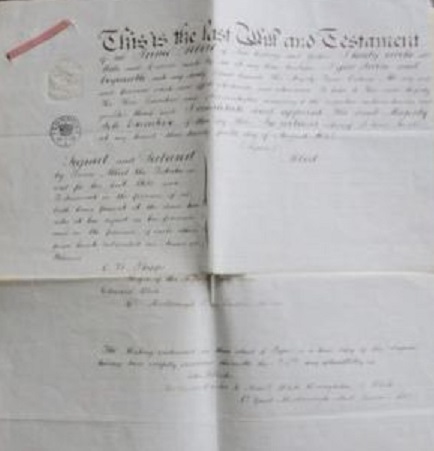 1852 ORIGINAL, SUPERB RELIC OF HIS LOVE AND SIGNIFICANT MANUSCRIPT DOCUMENT 'LAST WILL AND TESTAMENT' OF PRINCE ALBERT, THE LOVING HUSBAND AND CONFIDANT OF QUEEN VICTORIA, ONE OF THE MOST BELOVED AND REVERED MONARCHS TO EVER RULE

On offer is the extraordinary Last Will and Testament of Prince Albert, Prince Consort and husband of Queen Victoria. This is a document of historical significance. In beautiful mixed gothic and roman cursive, it states, "This is the last Will and Testament of me Prince Albert of Saxe Cobourg and Gotha. I hereby revoke all Wills and codicils made by me at any time heretofore. I give devise and bequeath unto my dearly beloved Consort Her Majesty Queen Victoria All my real and personal estate and effects whatsoever and wheresoever to hold to Her said Majesty Her Heirs Executors and Administrators according to the respective natures tenures and qualities thereof and I constitute and appoint Her said Majesty Sole Executrix of this my Will. In witness whereof I have hereto set my hand this heavenly fourth day of August 1852. (Signed) Albert" Under this main passage is the witness statement by "C.B. Phipps Keeper of Her Majesty's Privy Purse" and "Edward White G. Marlborough St., London, Solicitor". The witness statement reads, "Signed and Declared by Prince Albert the Testator as and for his last Will and Testament in the presence of us both being present at the the same time who at his request in his presence and in the presence of each other have hereto subscribed our Names Witnesses." This is as stated an official copy. Prince Albert died in 1851, and shortly after his death, this copy of the Last Will and Testament was inspected for authenticity. This is stated at the bottom of the sheet: "The Writing contained in this sheet of Paper is a true copy of the Original having been carefully examined therewith the 20th day of March 1862 By us. John Harks. Thomas Balten Clerks to Messrs. White Broughton & White, 12 Great Marlborough Street, London, Solrs." The back of the sheet says the same thing. "(Attested Copy) Will of His Royal Highness the Prince Consort" and is dated "24th August 1852". The will contains an official "One Shilling" stamp impression as well as a circular ink impression that reads "London 20.9.61" and contains a small detailed crown. Albert was born in the Saxon duchy of Saxe-Coburg-Saalfeld and at the age of 20 married his first cousin Queen Victoria. The Queen eventually came to depend very heavily on his support and guidance. He aided the development of Britain's constitutional monarchy by persuading his wife to be less partisan in her dealings with Parliament Albert died at the young age of 42, plunging the Queen into deep mourning. This Last Will and Testament is a testimony to their love. The Queen would never marry again after Albert died. That the Will gives her everything is a beautiful reminder of an important and historic royal marriage. Some splits in the fold but overall G+. [JS] Size: Atlas Folio - over 23" - 25" tall.

Title: 1852 ORIGINAL, SUPERB RELIC OF HIS LOVE AND SIGNIFICANT MANUSCRIPT DOCUMENT 'LAST WILL AND TESTAMENT' OF PRINCE ALBERT, THE LOVING HUSBAND AND CONFIDANT OF QUEEN VICTORIA, ONE OF THE MOST BELOVED AND REVERED MONARCHS TO EVER RULE

1852 ORIGINAL, SUPERB RELIC OF HIS LOVE AND SIGNIFICANT MANUSCRIPT DOCUMENT 'LAST WILL AND TESTAMENT' OF PRINCE ALBERT, THE LOVING HUSBAND AND CONFIDANT OF QUEEN VICTORIA, ONE OF THE MOST BELOVED AND REVERED MONARCHS TO EVER RULE