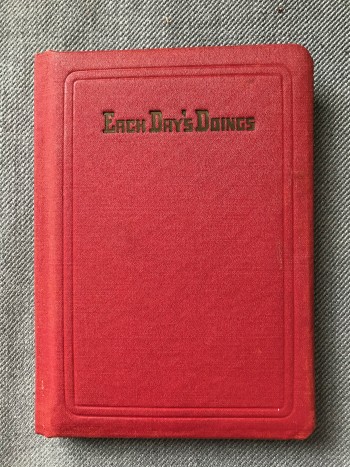 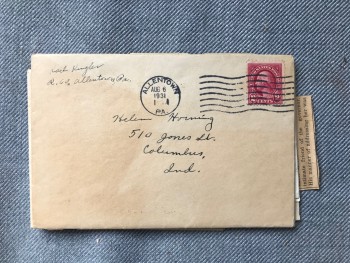 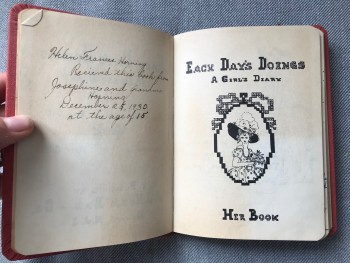 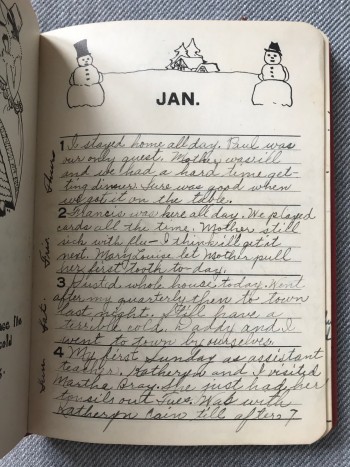 On offer is a fascinating diary in very good condition by Helen Frances Horning, a fifteen-year-old girl in the early days of the Great Depression in the American Midwest. Horning (married name Hoskins) was born in 1915 and lived in Indiana her entire life. She passed away in 2011 at the age of 96. Graduating from high school in 1934, she didn’t return to university until 1967. She became a teacher and taught for fifteen years, retiring at the age of 70. The diary was written when Horning was fifteen. It is chock full of the events and names of individuals that made up her busy adolescent life. Reading this diary, the enthusiasm and optimism of the author shine through. For a social historian, it is an excellent look into the life of a typical white teenage girl in middle America. She exemplifies the attitude that would contribute to what was called "the greatest generation ever." "We had a nice program at Exercise this morning. Edith says I won first place in the contest. I asked Mrs. Condo and sure enough I did. I am almost shouting with glee!" [Feb 25] An enclosed newspaper clipping recounts how she won the local Latin Contest and will represent Columbus High School in the upcoming county-wide contest. "Got our report cards today. Mine were fine. [ ] farewell party tonight for Leon. He was so surprised. We had a swell time. I surely hate to see him leave." [May 29] Entries also reflect social prejudices extant at the time and these were expressed unselfconsciously: "Ab asked M.B where I lived and when I went to kindergarten at He says I went with him in the niger district taught by Miss Doup and sure enough I did. Isn’t that sweet of him remembering that?" [Nov 12] In her "Contacts" section, Horning lists three pages of names of friends and acquaintances -- a valuable resource for genealogists. The diary also contains a number of pieces of ephemera including newspaper clippings and several black and white photographs (not annotated).

Title: 1931 Charming Original Manuscript Diary Handwritten by a Young Girl in the American Midwest during the Great Depression