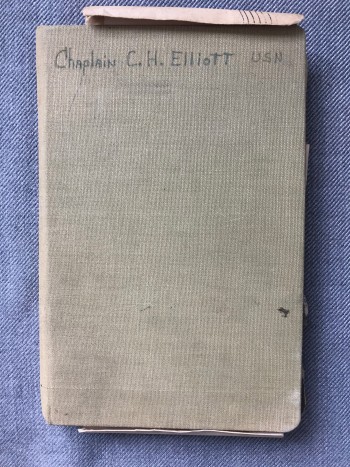 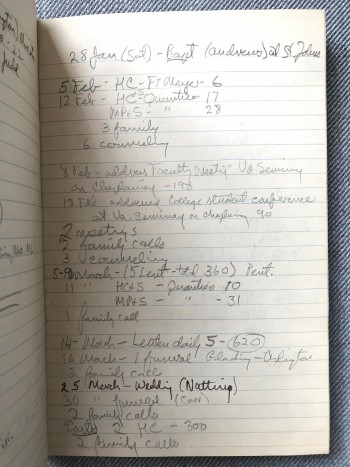 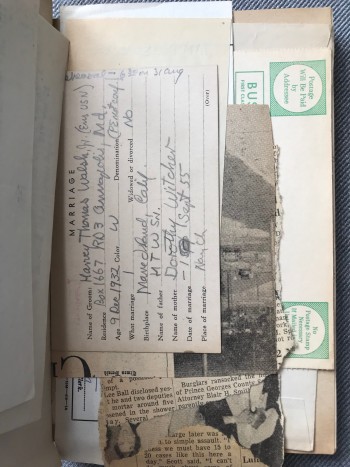 On offer is a fine hardcover notebook written by a United States Navy chaplain following World War Two. Included as well are a number of pieces of ephemera and legal documents, such as marriage licenses, an invitation to the wedding of the daughter of a US Navy Admiral, and various newspaper clippings. The author of the volume is Reverend Calvin H. Elliott, an Episcopalian minister and US Navy chaplain who served immediately after WWII. Not only does this detailed notebook provide insight into the thoughts of this Navy chaplain and his worldview, it also offers concrete and valuable genealogical information for those researching family connections within the military community. Elliott’s journal is a line-noted book in which he recorded events between May 1946 and November 1957, with the bulk of entries taking place between 1948 and 1953. Inside, Elliott provides a fascinating glimpse into his life and service. He reflects on topics ranging from why he should obey orders from the Navy, to the purposeless nature of attending Columbia University in New York, to the comfort found in the belief in a spiritual reality. The journal begins with the chaplain taking his oath in New York City, and goes on to recount brief trips to Los Angeles and Washington DC, getting his vaccinations, travelling to Hawaii and seeing Pearl Harbor, and then moving onward to the Marshall Islands, Guam, and Shanghai. Many entries over the years detail births and baptisms, marriages and funerals within the military communities that he served. The following samples reveal the flavour of Elliott’s records: “Took oath May 21, 1946 NYC.” [May 21, 1946] “Flew on NAVS to Pearl Met Capt MA Norcross SC USN. Look up in China Co-pilot NATS: Lt. WL.” [June 5, 1946] “Left Guam to Shanghai and arrived Tringtar at 1200.” [June 24, 1946] “Assigned to 2nd Bn 1 Mar Div. Duty with additional work at the airstrip.” [June 25, 1946] He also made notes for sermons and recorded personal reflections. “Loneliness can’t be tossed out by drink or mad living or by reason. Its a longing for companionship which is more than just closeness—its for a mutual understanding, a knowing . . . a deep seated sense of life in its meaning and beauty and breathless adventure.” [Sept 1, 1948] This volume measures 8.0 inches by 5.25 inches and contains 188 pages. It is twenty percent complete. The condition of the covers and binding is good and the pages are all intact with legible handwriting.

Title: 1946-1957 Original Handwritten Journal with ephemera by a US Navy Chaplain Serving in Asia and the Pacific after World War Two