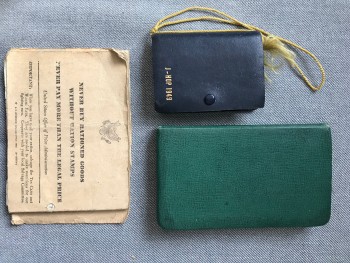 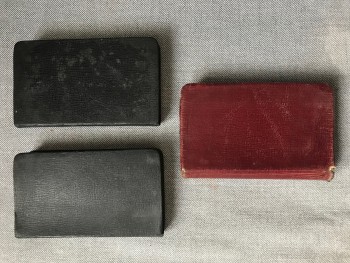 On offer is a fine collection of diaries and documents belonging to Maurice S. Hahn, CPA, a very successful finance and accounting professional in the United States. The diaries detail the life of a young student from rural Indiana at the end of the Depression—a man who would go on to build a very successful career and make a positive impact on his community. For an historian, they provide a fascinating look at mid-century student life at a major American university. The card and case are an excellent piece of memorabilia from an exciting university social event, while the ration booklets offer sobering insight into life on the home front during WWII. Hahn was born in 1918 in rural Indiana. He received his BA from the University of Michigan at Ann Arbor and enlisted in the US Army at the beginning of World War II. He lived his professional life in Michigan and passed away in 2016 at the age of 97. During his war service he rose to the rank of Master Sergeant, and was responsible for the payroll of some 40,000 soldiers. After the war, he earned his CPA designation, established his own firm, and eventually, through a series of mergers, became a managing partner of Coopers & Lybrand (now PricewaterhouseCoopers – PwC). He was very active in his community. The collection includes four WWII war ration books issued to Hahn’s wife and her siblings. These booklets are partially complete, with some ration stamps for specific commodities such as coffee or sugar and “spares.” Also included is a small case containing a package of playing cards with the University of Michigan’s crest. The case is monogrammed “J-Hop 1949.” It also contains an eight-page insert card that lists the patrons and committee members of the Class of 1949 J-Hop. J-Hop was the name by which the Junior Ball was known at the University of Michigan. Begun as a formal dinner and dance evening in 1860, by Hahn’s time it had grown to a major multi-day social event. Entertainment was provided by some of the biggest name bands in the United States. In 1949, for Hahn’s J-Hop, the signature performer was the Tommy Dorsey Band. Both the case and the cards are in very good condition. The diaries open with Hahn working in his father’s dry goods store in Mishawaka, Indiana. The Great Depression still cast its pall over the country, and the American Midwest was hard-hit. “Worked at store. ... It was the day Relief orders come in. ...” [May 23, 1938] “Got mail from U of Mich saying they accepted my application. ... Worked at store. We were pretty busy all day. It was WPA pay day. ...” [Aug 31, 1938] Once he entered university, his days were filled with classes, assignments, and social events. “Got up at 6:45 to fix fire Got up at 7:30 washed ate Got postcards, sent one home, got job at Wolverine from Vern Bowers, Economics quiz, Psych Ate with the Boys Came home Math got food [ ] permit from Health Services, got haircut from [ ] Herran at Union shaving cream Studied, Slept, Swept porch ate with the Boys Pep meeting at Field House rioting was broken up by M Club fellows Bed 13:30.” [Oct 6, 1939] He does not mention any of the larger events that were happening in the world, such as the start of WWII, the bombing of Pearl Harbor, or America’s entry into the war. However, he does record that he did not want to take part in the conflict: “... Saw Rev Schmale about Consc Obj form [Conscientious Objector]. Filled it out. Wrote note to Mama to include.” [June 8, 1941] Maurice Hahn graduated with his bachelor’s degree from the University of Michigan in 1942. He then enlisted in the United States Army. The four diaries are in good condition and date 1938, 1938, 1940, and 1941. They are 6.0” x 3.5”, 365 pages long, and are 100% complete. The ration book covers are fair, with worn covers and good-condition binding and pages.