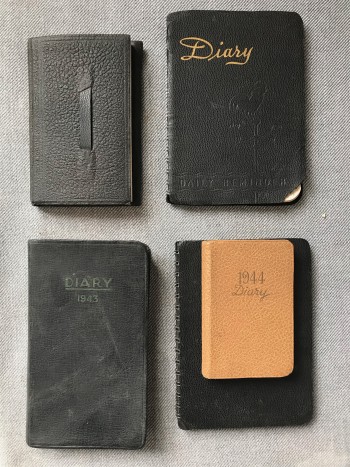 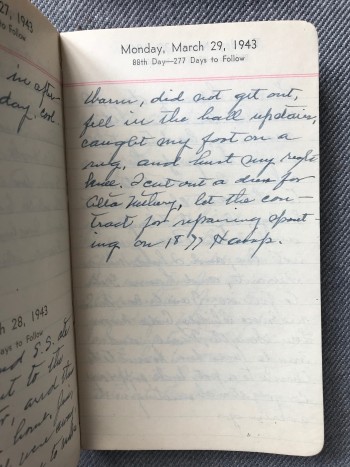 On offer is a very interesting collection of five diaries depicting a woman’s life in mid-twentieth-century America. The author of this group of diaries is Margaret Seaton. Casual research has not uncovered any biographical detail about her. The diaries span a 10-year period, and the mention of a 57th wedding anniversary suggests that she may have been elderly at the time of writing: “57th wedding anniversary. I did not see one of my family. Janice [ ] came for me at 2 P.M. Went to her country home stayed for tea and dinner, she and her husband drove me home at 9 P.M. They have 4 lovely children ...” [Sept 11, 1941] These journals are quite personal, with little reference to events going on the world at the time of writing. Context suggests that Seaton’s husband is a naval officer, but there are only rare references to him or to his wartime service. “Lt Cmdr R.W. Seaton, c/o Naval Base 3245, Dept A, c/o Fleet P.O. San Francisco, Calif.” [Memo notes, 1944] (This would locate him on Saipan Island, in the Marianas Islands, Pacific Ocean.) Seaton appears to live a very middle-class life. Her days are taken up with some housework and an extensive amount of socializing with friends: “Up at 8:35 Cloudy Received a wonderful picture of Nancy. Home all day to bed at 7:45 to read and play sol(itaire).” [Jan 27, 1941] “Irene took Joyce and I to luncheon on 54th below Madison. We went to the country for dinner, spent the night. Everything looks like spring at the Hammer home.” [Apr 28, 1941] “D Day – very exciting. We had dinner in the Persian Room at the Plaza Blair [ ], V, I, Jean [ ] and I saw Hildegard entertain ... A nice evening ...” [June 6, 1944] “Nice day. I was up at 7:30. Had lunch here. Rested a while , went to call on Mabel Berger – Abe was out, and visited for an hour ... We had a nice dinner here. Sat on the porch , came in and read.” [July 19, 1951] For a social historian, this group of diaries opens a window into a particular social class in America in the middle of the 20th century. This woman’s life and the lives of her friends seem untouched by the great events swirling around them. There is no indication that she ever participated in the work force during the war and, indeed, rarely even mentions it. These diaries would also be a valuable reference for a Women’s Studies program as they reveal very clearly a role played out by a portion of the female population in America at that time. The five diaries are dated 1941, 1942, 1943, 1944, and 1951. All are 100% complete and in good condition.

Title: 1941-1951 Archive Lot of Deeply Personal Original Handwritten Diaries that Provide a Detailed Account of One Woman’s Life in Middle-Class America During and After World War II