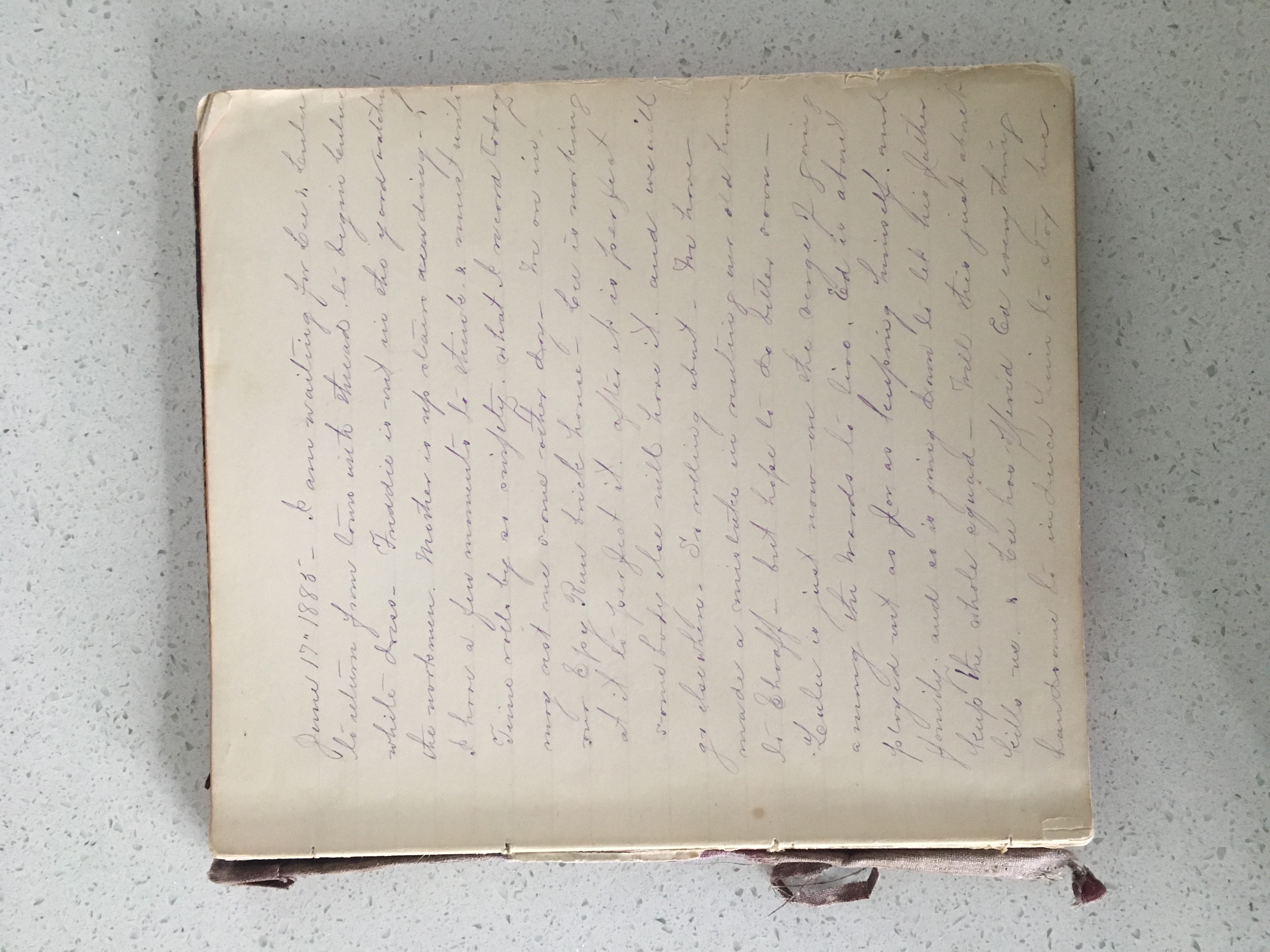 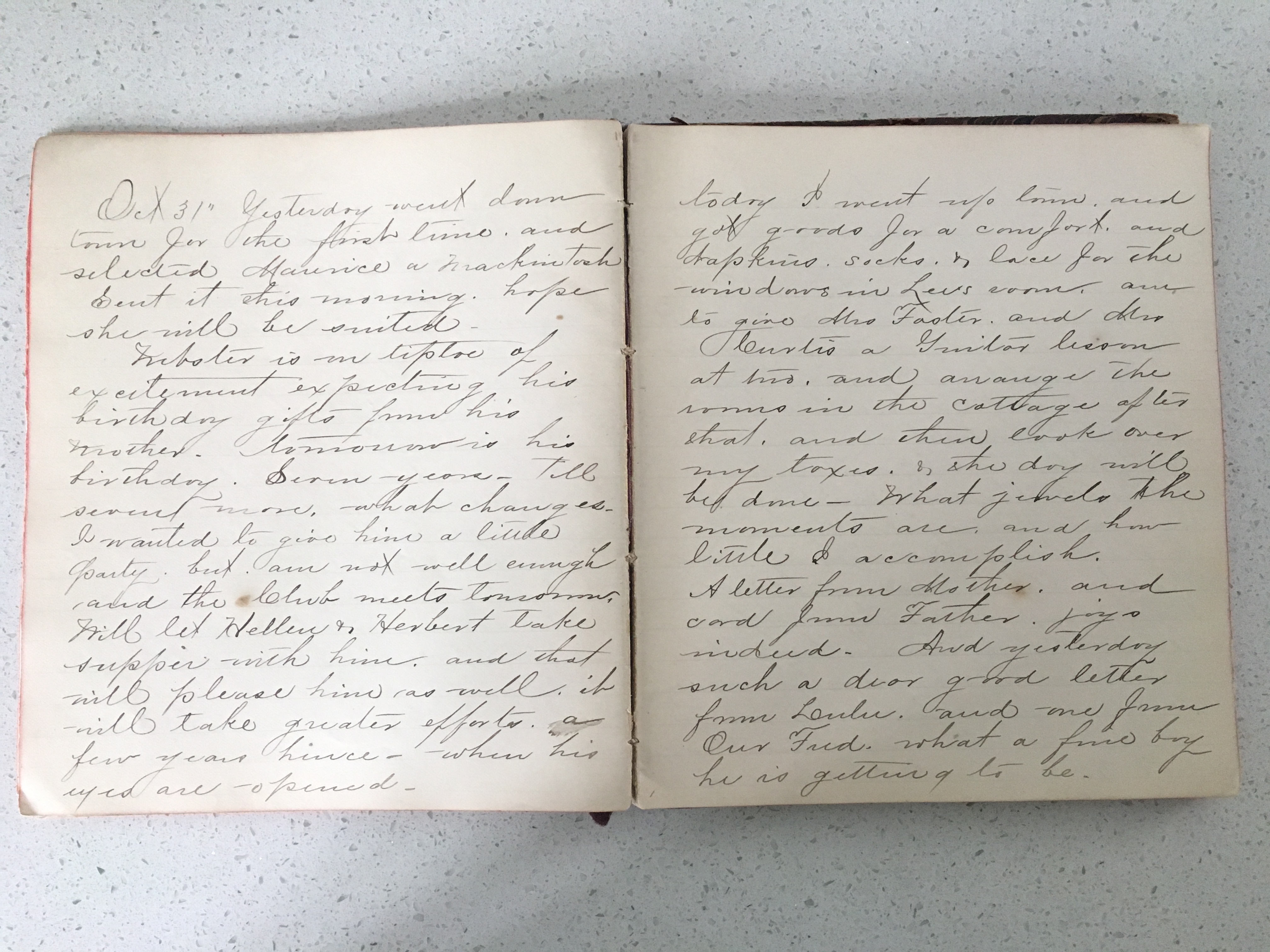 1885-1904 Diary Chronicling 20 Years in the Life of a Wealthy American Frontier Woman from Teen to Middle Age, Referencing the Panic of 1893, Deaths of Ulysses Grant and Carter Harrison Sr

On offer is a wonderful journal a woman kept over a twenty-year period of her life in the late-19th century mid-west of the United States. The author of this journal is unknown. We know that she is a young woman living in Fort Wayne, Indiana as her father prepares to sell their home and head out to Missouri in 1885. This journal documents some twenty years of her life as she moves to different cities, gets married, has at least one child and deals with the challenges and vicissitudes of life on the frontier of the great plains. Her story is one of adventure, hard work, struggle, joys and sorrows. Her journeys take her from Indiana to Missouri and thence to Chicago and the Dakota Territory before returning to Indiana where she settles down in Shelbyville, IN. The journal that she kept records some outstanding historical content. There are frequent gaps in her entries and many only record the month and day, leaving out the year. However, it is clear they begin in 1885 and end in 1904. The first entry suggests that she is in her late teens as she is living at home: "I am waiting for Lee to return from town with thread to begin Lulu's white dress. Freddie is out in the yard watching the workmen. Mother is upstairs reading - I have a few moments to think ... Time rolls by so swiftly...." [June 17, 1885]. Subsequent entries suggest that her family is well-off. Indeed, there are references property lots and homes owned by either her or her family: "Saturday without a servant is life without poetry...." [July 25, 1885]. In Kansas City, she recounts visiting Leavenworth, Kansas: "This is the last day in January and while I am waiting here in my room at 321 West 12 th Street Kansas City for Mr. Young to come and take me to hear Robert Laird Collier tonight, I will put in time writing. Let me see Thursday morning I went to Leavenworth to see our lots. Went to Mr. Kelley's office. Found him very ............... (ellipsis hers) Mr. Kelly as I said seemed a perfect gentleman had an excellent family. ... Saw the Penitentiary... I dined at the Ford Hotel saw quite a number of soldiers at dinner..." [Jan 31]. "I left home one week tomorrow for this point (Pierre, Dakota Territory) We spent two nights at the Palmer House Chicago and came on here. ... Fortunately we have found a dear true woman to board with. ... The view from our window is of the hills across the Missouri River. They are in the Indian Reservation and this little city is looking with hopeful eyes to the time when it shall be opened up to the White man…" [Apr 11, 1886]. She recounts her suffering that resulted from the Panic of 1893. This was a crippling economic depression in the United States that began in 1893 and ended in 1897. It impacted virtually every sector of the economy. Hundreds of banks closed, fifteen thousand businesses failed and untold numbers of farms went bankrupt.. The unemployment rates skyrocketed and thousands of Americans faced starvation. It was a desperate time in the United States and in fact had serious political ramifications: "Now what keeps me down is the worry over money matters. Tight times, big assessments, taxes about due and no sales can be made. ... I am nothing beneath a load that is O so heavy... "[Oct 28, 1893]. She makes oblique reference to a family tragedy at one point: "Emerson and Lezzie accomplices in the death of my brother are married and no steps as yet taken to rectify the wrong". She also notes the death of the American war hero and President - Ulysses Grant: "General Grant dies today after all the Old Hero conquered, as we will all be ..." [July 23, 1885]. She also records the assassination of the then-mayor of Chicago, Carter Harrison Sr: "This morning the papers were full of accounts of the wicked assassination of Mayor Harrison of Chicago - a most daring deed, the work of a homeless crank. ..." {Oct 29, 18930. Her last entry is in early 1904: "Another anniversary and what changes have come in my life. The real me. With all my sorrows how thankful I am that my soul has come into a realization of its needs - and knows ..." [Feb 14, 1904]. This journal is quite well-written and provides a wealth of historical detail and colour of life in this frontier part of America. A social historian would find many geographical references in the communities in which she lived. As well, in the back pages are a number of names and addresses that would aid a genealogist researching families in this area. Written in a hard-bound notebook, this journal measures about 8 inches by 7 inches and contains 150 pages. It is about 95% complete. The journal itself shows a great deal of wear. The front cover is missing. The binding is intact but the fabric cover over the binding is damaged. The binding of all of the pages is intact but there is evidence that some pages have been cut out from the book. The handwriting is quite legible. ; 8vo 8" - 9" tall; Keywords: Fort wayne; indiana; women's studies; shelbyville; dakota territory; Chicago; panic of 1893; great depression; economic crisis; robert laird collier; ulysses s. Grant; assassination; united states; mid west; frontier life; travels; turn of the century; teen girl; coming of age; family history; handwritten; manuscript; document; letter; autograph; writer; hand written; documents; signed; letters; manuscripts; diary; diaries; journals; personal history; social history; historical; holograph; writers; autographs; personal; memoir; memorial; antiquité, contrat; vélin; document; manuscrit; papier antike; brief; pergament; dokument; manuskript; papier oggetto d'antiquariato; atto; velina; documento; manoscritto; carta antigüedad; hecho; vitela; documento; manuscrito; papel

Title: 1885-1904 Diary Chronicling 20 Years in the Life of a Wealthy American Frontier Woman from Teen to Middle Age, Referencing the Panic of 1893, Deaths of Ulysses Grant and Carter Harrison Sr

1885-1904 Diary Chronicling 20 Years in the Life of a Wealthy American Frontier Woman from Teen to Middle Age, Referencing the Panic of 1893, Deaths of Ulysses Grant and Carter Harrison Sr