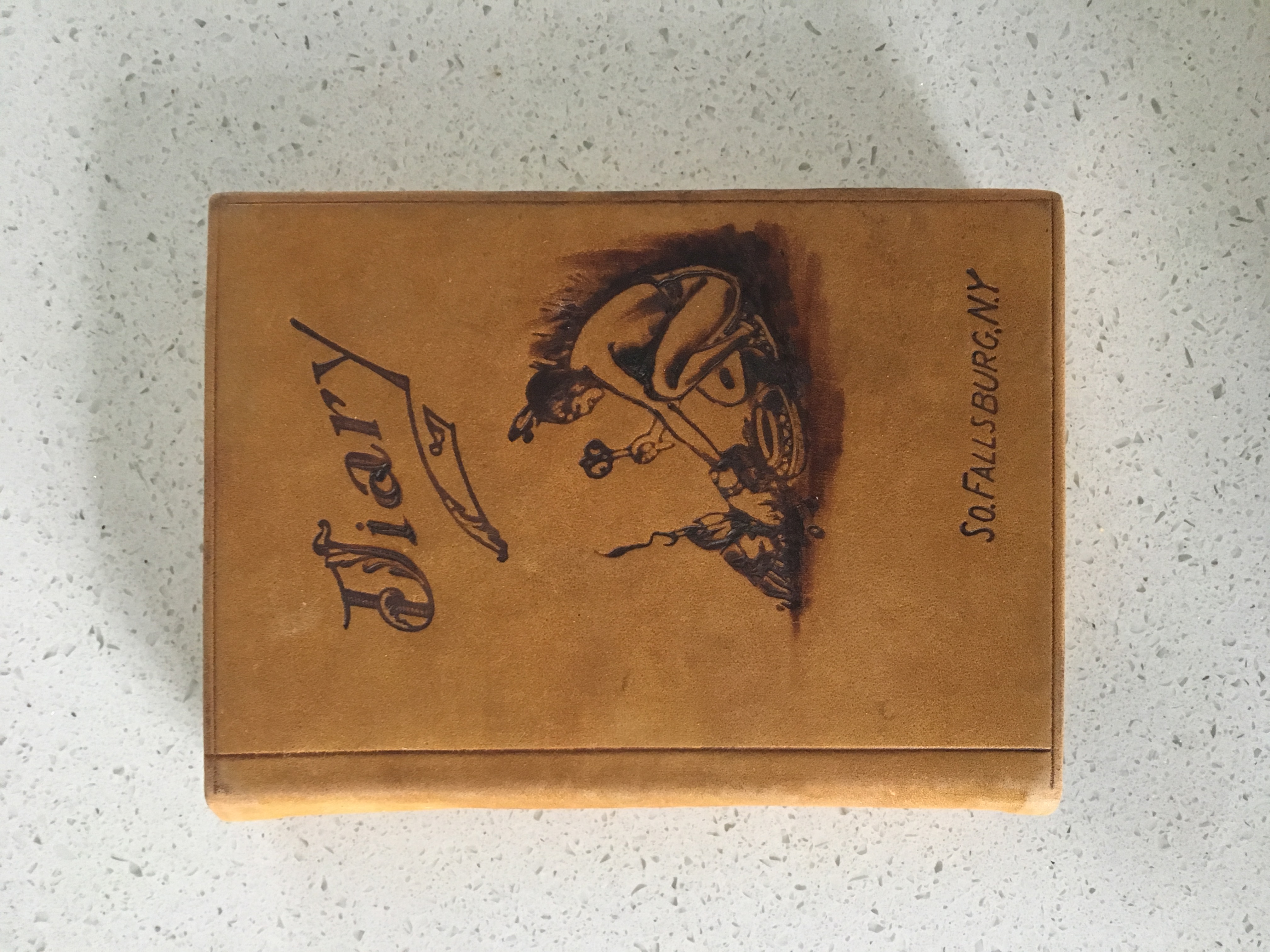 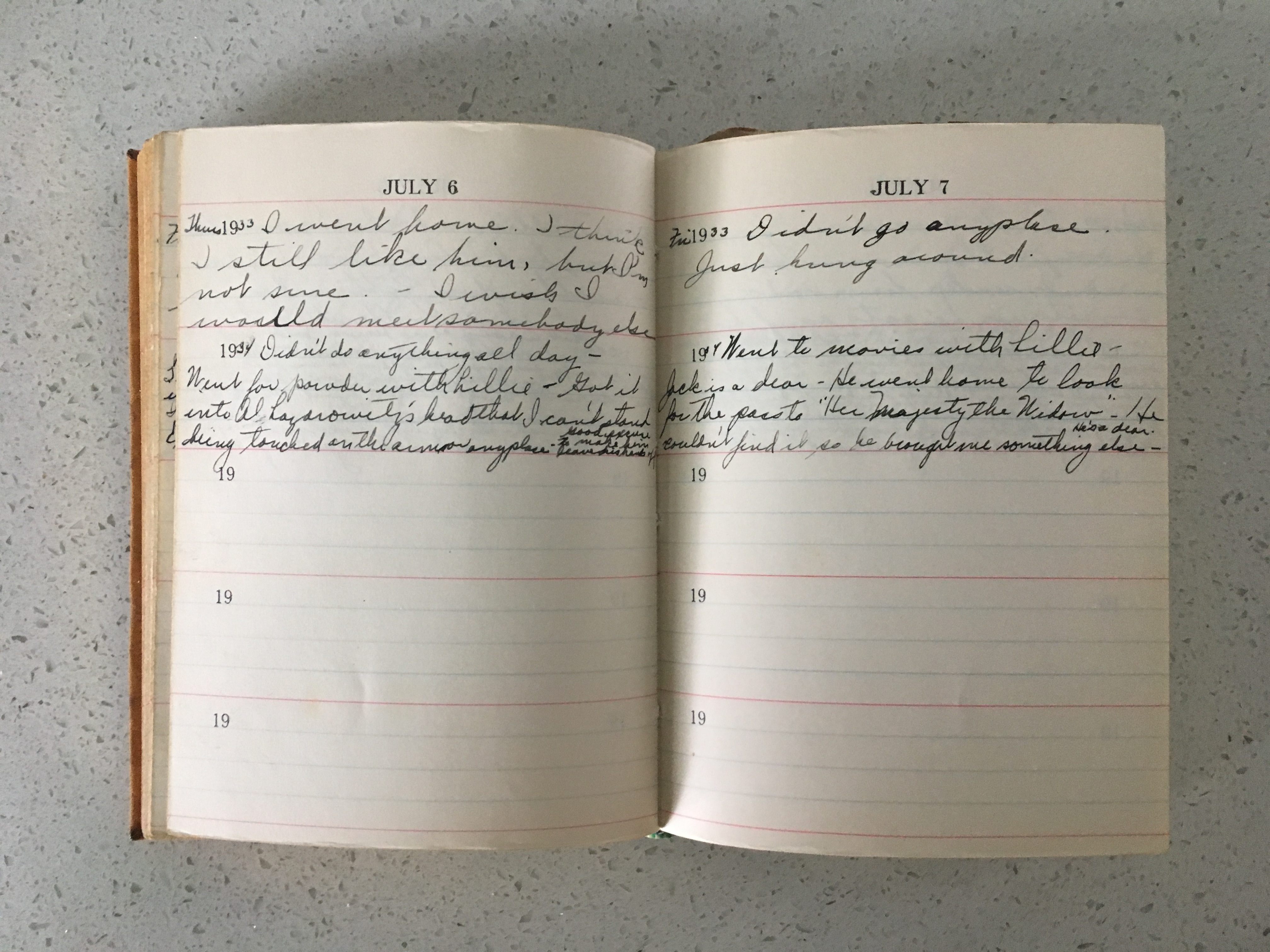 1930s Multi-Year Interwar Diary of a Middle Class Jewish New Yorker, Age 16, Untouched by the Great Depression, and Unaware of the Inequities of the Time

On offer is a well-kept Jewish, middle class teenage girl's five-year diary from the 1930's in New York City. The author of the diary is Florence Heller. She lives in New York City and context suggests that she is 16 years of age when she begins it. Our informal research has not found any other additional biographical information about her. The diary covers the years 1933 and 1934 with several more entries scattered of the following 3 years. Her family is Jewish and as owners of a shop, occupy a middle class position in the community. There are no references to the widespread economic woes of the Great Depression and her life seems insulated from its ravages. As you would expect, it is chock full of the events and names of individuals that made up her busy adolescent life. "My birthday - terrible time - went shopping for a party - bought nothing. Sam Gottlieb called - had a good laugh" [Jan 2, 1933]; "Got a call from Benny - he's bringing a friend along for Yetta - hope its someone nice ... Yetta slept over. Benny brought Hal much to my disappointment - Benny is just about crazy over me - Saw Irving while walking with Benny - was a bad girl because I kissed too much" [Feb 24, 1933]; "I wonder if I should go with Perry. I'll ask Lillie what to do"[June 24, 1933]; "Yetta told me she met a nice fellow in nite school - I ought to go too - maybe I'll meet a nice fellow ..." [Oct 23, 1933]; "Closed store - Bob came in - said he didn't write because he was ill - I don't particularly care for Bob - We're going out tomorrow with Charlie and a girl" [Jan 13, 1934]. The simple reference to the family having a 'colored girl' to do housekeeping hints at the racial and economic divisions in their society: "Francis, the colored girl didn't come so I had to clean, put on curtains & change bedding. After shower we had seder" [Mar 30, 1934]. For a researcher into Women's Studies or a social historian, this is an excellent window into the world of teenage girls during the inter-war years. The attitudes hinted at in this diary point to the type of traditional roles for women that would be steadily altered over her lifetime. The diary measures 5.5 inches by 4.0 inches and contains 365 pages. It is approximately 40% complete. The book is in good condition. The cover is a soft leather with an embossed design and shows little sign of wear. The handwriting is legible.; Manuscripts; 24mo 5" - 6" tall; 365 pages; Keywords: handwritten, manuscript, document, letter, autograph, writer, hand written, documents, signed, letters, manuscripts, historical, holograph, writers, autographs, personal, memoir, memorial, antiquité, contrat, vélin, document, manuscrit, papier antike, brief, pergament, dokument, manuskript, papier oggetto d'antiquariato, atto, velina, documento, manoscritto, carta antigüedad, hecho, vitela, documento, manuscrito, papel, Classism, racism, Great Depression, Lived Experiences, Girls experiences, women's studies, growing up in New York, NYC, New York in the 1930s, interwar years, middle class, Jewish women, Jewish teenager, store owner, Jewish store owners, Jewish middle class NYC, Americana, US History ; Signed by Author

Title: 1930s Multi-Year Interwar Diary of a Middle Class Jewish New Yorker, Age 16, Untouched by the Great Depression, and Unaware of the Inequities of the Time

1930s Multi-Year Interwar Diary of a Middle Class Jewish New Yorker, Age 16, Untouched by the Great Depression, and Unaware of the Inequities of the Time