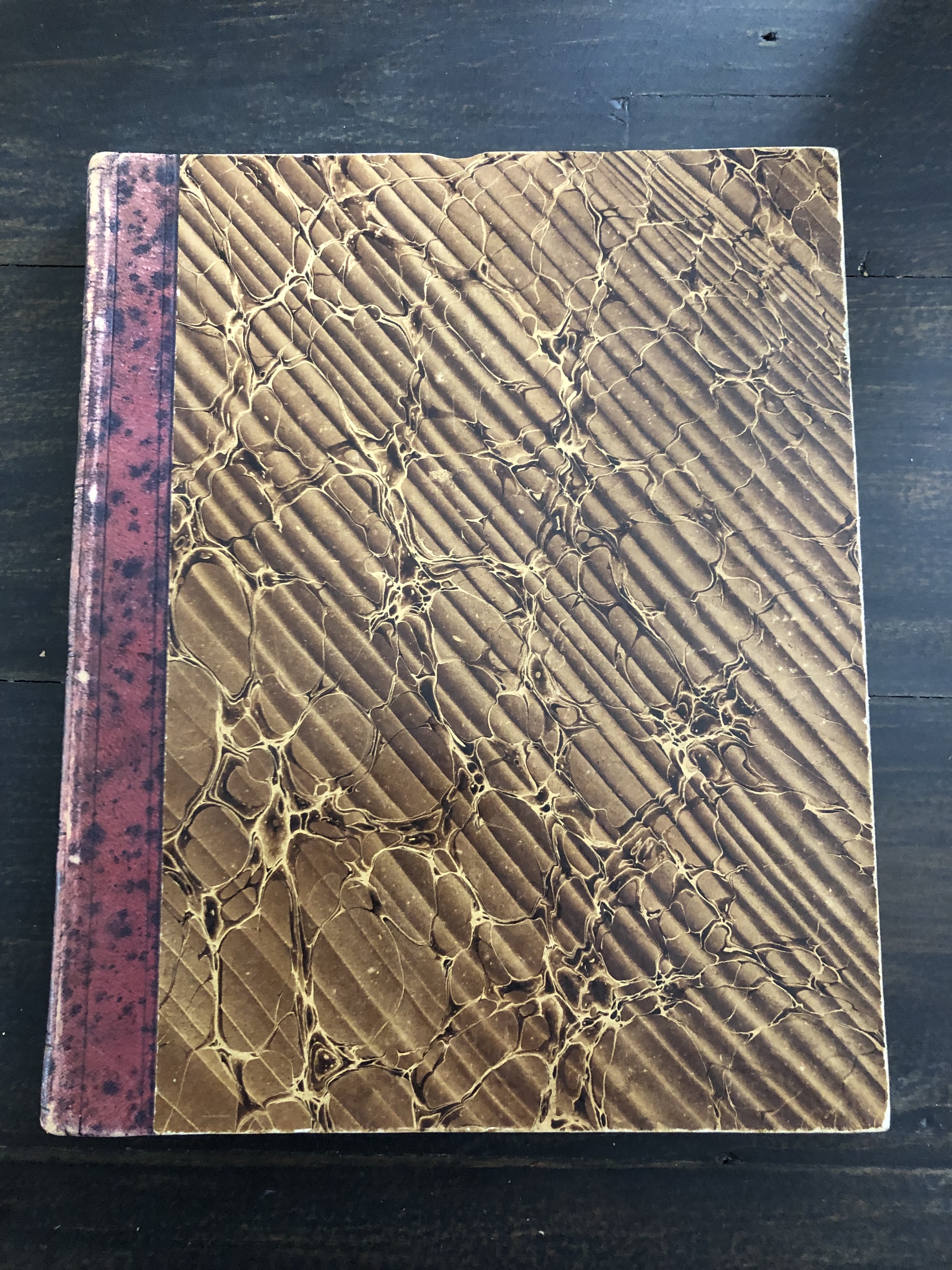 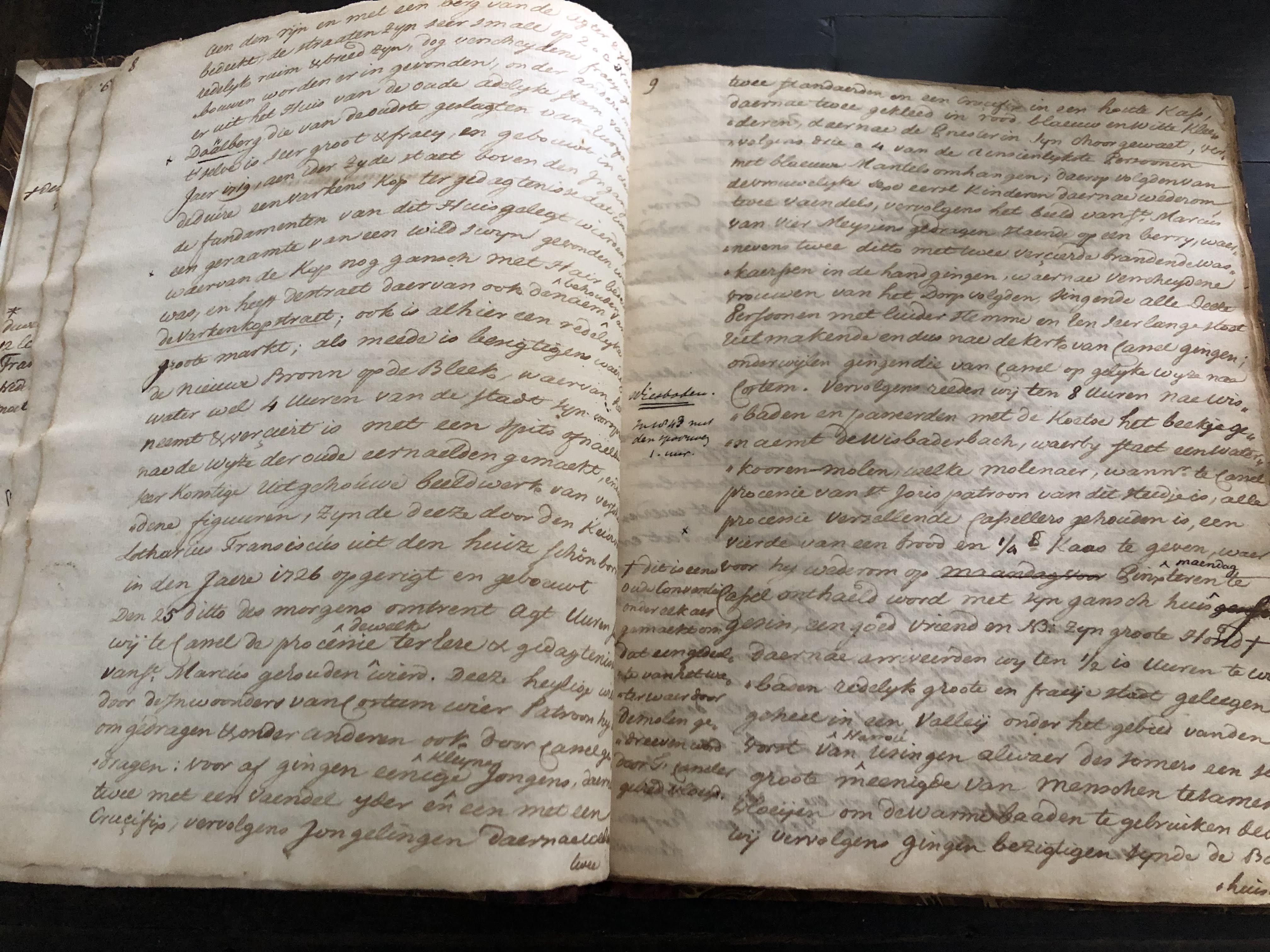 On offer is a superb, original historical early 18th Century travel journal of three [3] Dutch men, Daniel van Alphen, P. van Dorp and the writer of the journal Hendrik van Alphen (1708-1764) who travel from Holland to Germany from April 9th 1739 through late summer. Hendrik is listed on Dutch genealogical sites as a 'koopman' or in English a merchant and given the many references that include numbers the approximately 8 x 10 inch very full 133 hand numbered page book is unlike diaries there is little detail of the daily doings but rather Hendrik described landscape and the community, where they were, how long the journey from one city to another city took and why in some cases the trip took longer than planned. The influence of Daniel van Alphen, whom was probably a registrar during the journey, is very clear in the journal. On every location that the authors arrived a specific attention is paid to the religious situation in that city or village. Matters such as the number of churches in the city and the friction between the different groups of the church were described. The landscape of the cities are also described with detail and some background information, which makes the journal very enigmatic and interesting to wonder the true intent of their visit if one is driven to whimsy! The trip lasted at least from Vollenhove (The Netherlands) to Hanau (Germany). The author even mentions being in Heinheim a few times, but this is now most likely known as Heidenheim. That means that they at least covered a distance of 500 kilometers, which was travelled over water or by foot. And if the Heidenheim is meant by Heinheim, the trip covered at least 750 kilometers. Other places visited include Groningen, Friesland, Berlin, Leipzig, Coburg, Frankfurt etc. The pages are bound in a somewhat later half leather binding. ONLINE BIO NOTES: Hij is geboren op 21 april 1708 in Hanau. Hij is overleden op 18 mei 1764 in Amsterdam, hij was toen 56 jaar oud. Beroep: Amsterdam, koopman. BIO NOTES2: Daniel van Alphen, born on 7 November 1713 and died 16 July 1797, was a well known individual in Leiden (the Netherlands). In the year that the journal was written, his family was established for more than 200 years in Leiden. His grandfather was even the mayor of Leiden. Van Alpen started studying Literature, but he made progress and was assigned as a teacher in Law (Leeraar in de Rechten). Shortly afterwards he was promoted to registrar (someone supporting the lawyer and preparing the court). Daniel van Alphen also made a contribution to the Dutch literature. In 1755 he published the book Recht der Overheden over kerkelijke persoonen en zaken, which discussed the authority of the government over religious figures and matters in the community. Between 1770 and 1784 he published three books describing the city Leiden. Overall VG.; Manuscript; 4to - over 9¾" - 12" tall; KEYWORDS: HISTORY OF, DANIEL VAN ALPHEN, P. VAN DORP, HENDRIK VAN ALPHEN, EARLY 18TH CENTURY TRAVEL, GERMANY, HOLLAND, NETHERLANDS, DEUTSCHLAND, FAHREN, AUSFLUG MACHEN, TOUR, AUSFLUG, FAHRT, COMMERCE, TRADE, ECONOMY, POLITICS, THE LOW COUNTRIES, LEIDEN, VOLLENHOVE, HANAU, HEINHEIM, HANDWRITTEN, MANUSCRIPT, AUTOGRAPHED, AUTHORS, AMERICANA, MANUSCRIPT, DOCUMENT, LETTER, AUTOGRAPH, KEEPSAKE, WRITER, HAND WRITTEN, DOCUMENTS, SIGNED, LETTERS, MANUSCRIPTS, HISTORICAL, HOLOGRAPH, WRITERS, AUTOGRAPHS, PERSONAL, MEMOIR, MEMORIAL, PERSONAL HISTORY, ARCHIVE, DIARY, DIARIES, ANTIQUITÉ, CONTRAT, VÉLIN, DOCUMENT, MANUSCRIT, PAPIER ANTIKE, BRIEF, PERGAMENT, DOKUMENT, MANUSKRIPT, PAPIER OGGETTO D'ANTIQUARIATO, ATTO, VELINA, DOCUMENTO, MANOSCRITTO, CARTA ANTIGÜEDAD, HECHO, VITELA, DOCUMENTO, MANUSCRITO, PAPEL, HANDSKRIFT, AUTOGRAFER, EGENHÄNDIGT, HANDSKRIVET, HANDSKRIVEN, MANUSKRIPT, BREV, SIGNERAD, SIGNERAT, SIGNATUR, NAMNTECKNING, AUTOGRAF, HANDSKRIFTER,