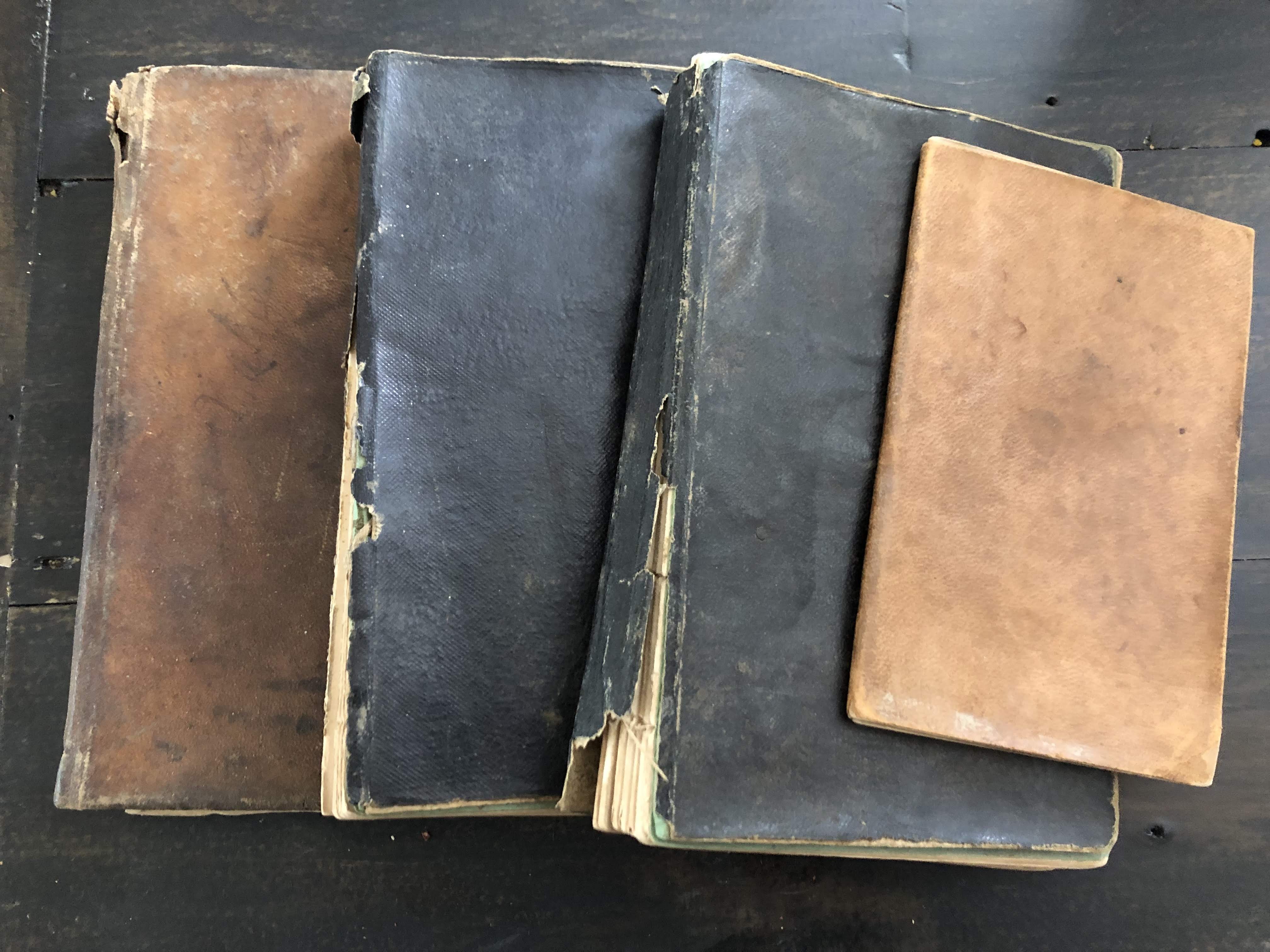 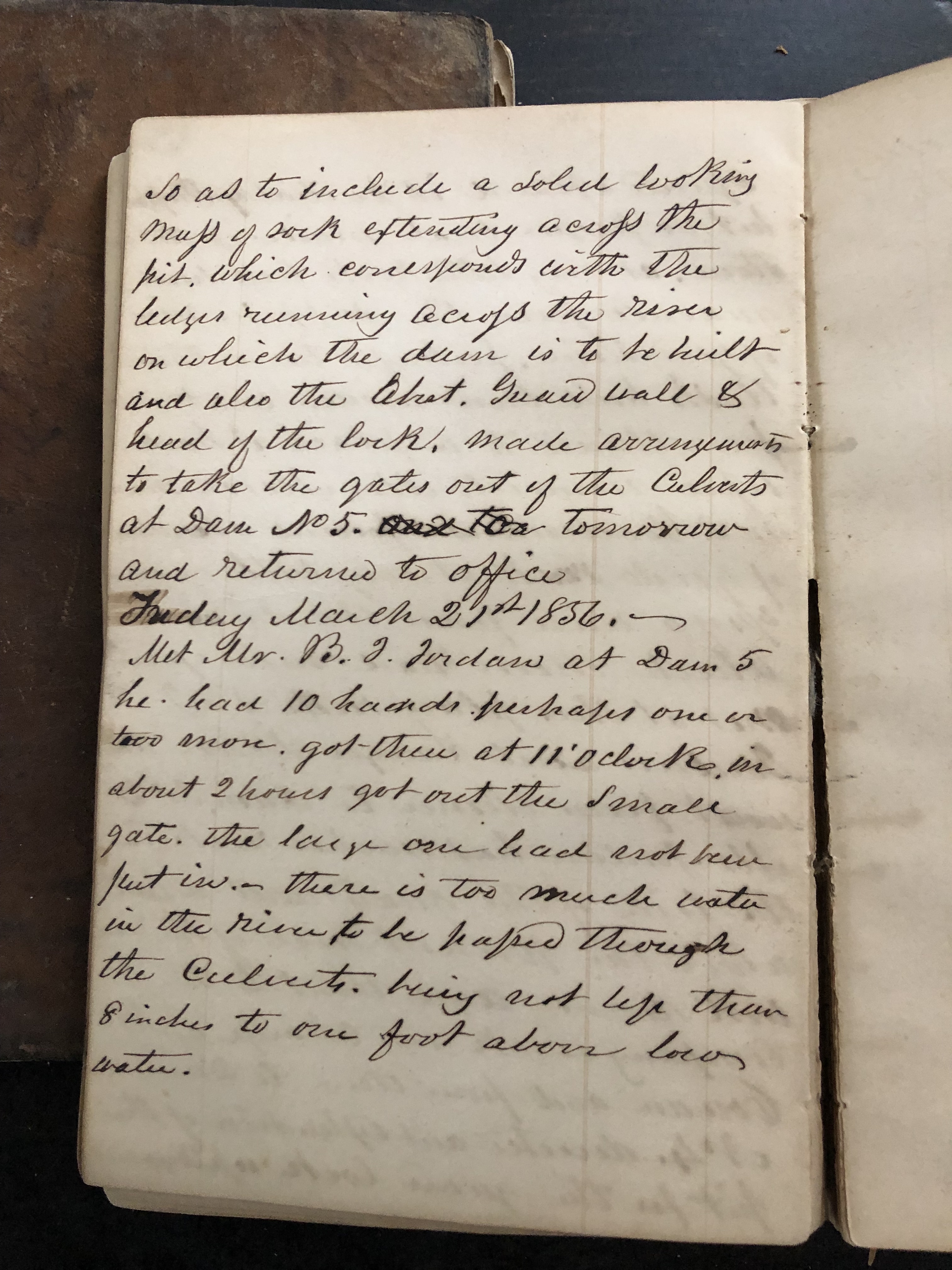 By: JOHN A. BYERS

On offer is a very special 1870 letter book of the noted American Civil engineer, John A Byers. The book measures 11 inches by 9 inches and contains 500 pages. Other than the faceplate, there are only 2 pages of tucked in entries - an unfinished letter. The book's cover has separated from the binding but all pages are intact. John A. Byers, noted Civil Engineer known for his groundbreaking work on internal improvements in 1850s Virginia. Byers was born in 1806 in Lewes, Delaware, and died in 1872. Among many roles he had over his distinguished career he was the Civil Engineer and Superintendent of the Coal River Navigation Company of West Virginia. For many years, he was Chief Engineer of the Western Division of the James River and Kanawha Canal Company in Charleston, West Virginia. He was also engaged as civil engineer on the North Branch of the Susquehanna River, and was one of the constructors of the Chesapeake and Ohio Canal. He would eventually become Chief Engineer and Superintendent of the entire company. This Letter Book is signed by him as Engineer of the Little [ ] Nav. Coy The two-page letter refers to a drawing he sent to a Mr. R H.[]: "Enclosed I send you a sketch of part of a lock being the vertical section of the river wall along with part of the head of the lock showing a transverse vertical section of the dam in connection with the lock ..." The letter goes on to detail preparations. The copperplate has been smudged and portions are difficult to read. The letter does not appear to be finished as it has no concluding remarks or signature. Also enclosed with the book is a letter written in Richmond, VA 1859 to one A.T. Laidley regarding two resolutions passed by the board of an unidentified stock holding company regarding work on the Kanawha River. Contextual clues suggest the company is the James River and Kanawha Canal Company. The letter is unsigned. It outlines a disagreement with a Mr. Ellet about where work is to commence: "I have no wish to contest this point but I was sure that Mr. Ellet would not accept it in place of his own". The Ellet named was the equally celebrated civil engineer Charles Ellet who at the time was Superintendent of the James River and Kanawha Canal Company. Ellet is also known for building the first wire-cable suspension bridge in the United States as well as a fleet of steam-powered ram vessels which contributed significantly to the Union's victory at the Battle of Memphis. Unfortunately, Ellet died of wounds in that battle. These two letters refer to a time of huge undertakings to link the Atlantic coastal region to the great inland Mississippi River basin. Initiated by George Washington, it was a concerted effort by the State of Virginia to develop the first such route and thereby gain commercial dominance over other neighbouring (and competitive states). Considering Byers' roles in this, these two letters fill in gaps in the story of this expansion westward.; Manuscript; 4to - over 9¾" - 12" tall; KEYWORDS: HISTORY OF, 19TH CENTURY, 1870S, JOHN A. BYERS, CHARLES ELLET, JAMES RIVER AND KANAWHA CANAL COMPANY, WEST VIRGINIA, VIRGINIA, COAL RIVER CANAL COMPANY, ENGINEERING IN THE 19TH CENTURY, CANAL BUILDING IN VIRGINIA, CANAL BUILDING IN AMERICA, LOCK (SHLEUSE, ECLUSE) BUILDING, HYDRAULIC ENGINEERING, WATER TRANSPORT, GEORGE WASHINGTON, LETTER BOOK, COPY BOOK, INLAND WATERWAYS, CIVIL ENGINEERING, MOVEMENT OF WATER, AMERICANA, HANDWRITTEN, MANUSCRIPT, DOCUMENT, LETTER, AUTOGRAPH, WRITER, HAND WRITTEN, DOCUMENTS, SIGNED, LETTERS, MANUSCRIPTS, DIARY, DIARIES, JOURNALS, PERSONAL HISTORY, SOCIAL HISTORY, HISTORICAL, HOLOGRAPH, WRITERS, AUTOGRAPHS, PERSONAL, MEMOIR, MEMORIAL, ANTIQUITÉ, CONTRAT, VÉLIN, DOCUMENT, MANUSCRIT, PAPIER ANTIKE, BRIEF, PERGAMENT, DOKUMENT, MANUSKRIPT, PAPIER OGGETTO D'ANTIQUARIATO, ATTO, VELINA, DOCUMENTO, MANOSCRITTO, CARTA ANTIGÜEDAD, HECHO, VITELA, DOCUMENTO, MANUSCRITO, PAPEL