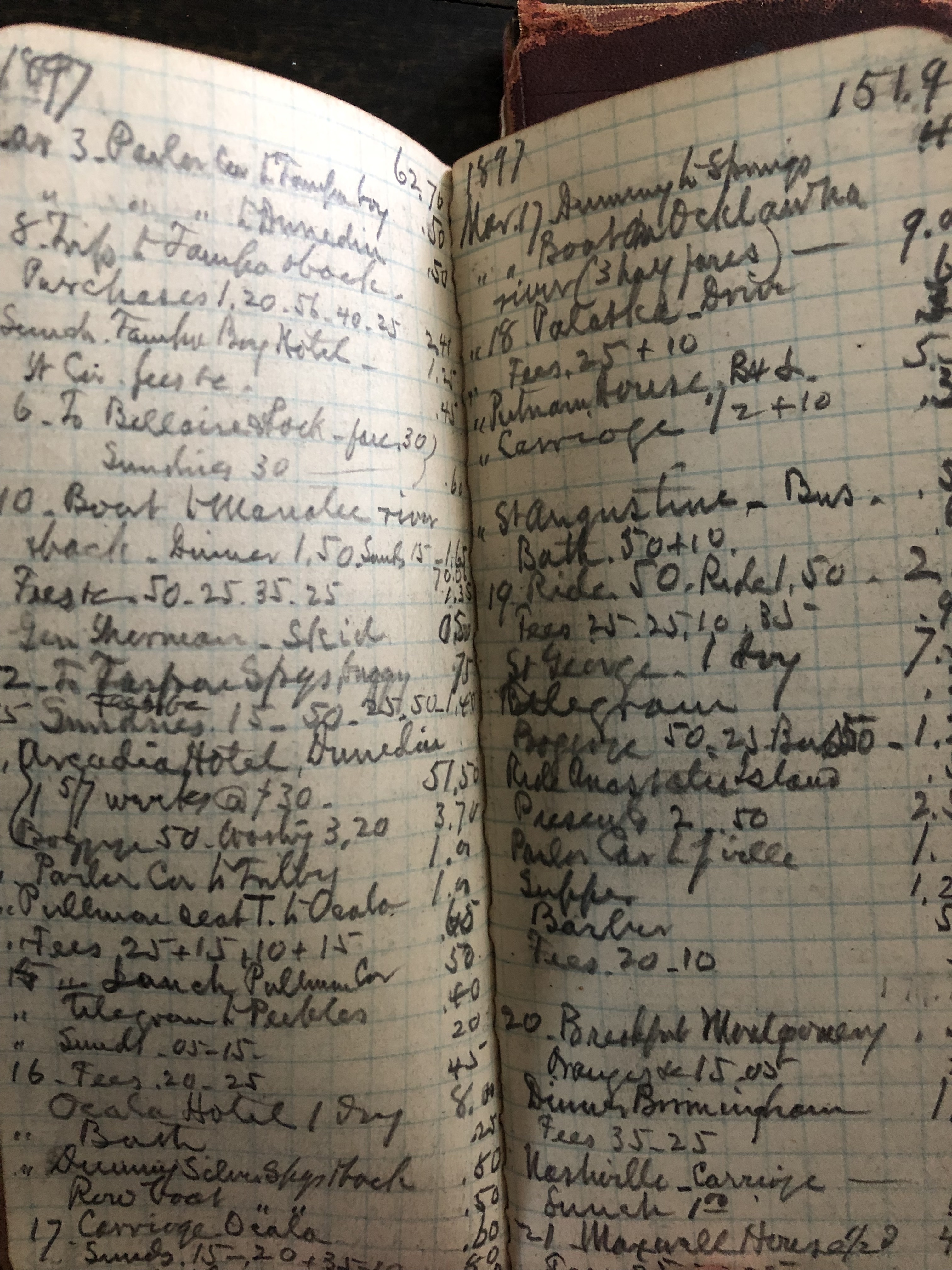 On offer is a fantastic group of notebook journals that belonged to Horace R. Hobart. Hobart led a long and illustrious life in newspapers, gazettes, and magazines. Born in 1839 he was a Wisconsin Cavalry Quartermaster in the Civil War starting in 1861 until being wounded in Arkansas. Beginning in 1866 he wrote for the Chicago Tribune as a reporter than was Editor of Chicago Evening Post (1867-1870), Co-founder of the Chicago Evening Mail (1871-1873), Editor of Chicago Evening Post (1873) again, editor and 1/2 owner of Daily Journal in Jacksonville, IL (1874-1875), editor of the Chicago Morning Courier (1875) and finally, one of the Founding Editor of Railway Age (1875 onwards), which continues to be published to this very day. The notebooks range from the year 1895 - 1912. Many entries are related to expenses including other personal expenses when in Chicago (Hyde Park) and Evanston, IL, plus personal notes regarding the train trips, his house construction, a few jokes, people he writes, many names. Also included are notes regarding his work at Railway Age. This is extremely interesting as it documents his trips down the block to his trips to Europe, Mexico and around the United States. For the most part, Hobart seems to have used these notebooks as records of his finances He documents his expenses, what he ate and did on the trips, costs of tickets, comments on rooms at hotels, costs of various items for example: 50 cent haircuts to his Vassar College tuition payment of $300 for his daughter Helen and $10 to his wife to pay the maid. But there are plenty of more personal notes that read like more traditional diary entries, especially the death of his brother. Many rail lines are mentioned; Chicago Railway, Philadelphia Electric, and others. He also is proud of his service and documents his service as seen below. He also discusses "pedigree" and some potential pre-revolutionary relatives. He fishes in FL and golfs in Augusta, GA and FL Mexico. Each journal is completely or mostly filled with entries. Most of the entries are done in pencil, and written in fairly tiny script. I would estimate that there are at least 20 pages of diary entries, some fill a page others while others are brief yet many, like his lists of expenses or of the train timetables. His writing can occasionally be a challenge to decipher, especially in some of the earlier notebooks where the pencil has smudged. All journals are on the very small side measuring 5 1/2” x 3 1/2” inches, with the smallest being 3 1/2” x 2” inches. The covers are in various states of wear, but are still structurally sound. One journal (1902 - 1906) is without a front or back cover, and one journal (1911 - 1912) has a cover that reads: “G. Kollbrunner. Papeterie. Bern. Marktgasse 14.” All the journals have Hobart’s name and the years in which they represent. Mostly it documents his rail trip in Geneva, Switzerland to Belgium. Text: “Sunday March 24/1907. Taken with chills and fever. Several chills. Foot swollen and bothersome. Saw Dr. Webster. Said I had rheumatic gout. Went back to house and have stayed home with prospect of staying more.”; “Friday April 12. Went out of the house and to city for first time since Mar. 24. The 19th day of confinement. Foot still a little swollen but otherwise seem to be well.”; “Mar. 16, 1911. Took Mrs. H. to nursing home to be treated for bronchial cough. 5 guineas a week. Attending physician Dr. Chalmers.”;; “Aug 25, 1912. Left for Santa Fe b/c sickness of brother.”; “Aug. 31, 1912. Edward F. Hobart died. Age 78 years 10 months.” OVERALL: G.; Manuscript; 32mo - over 4" - 5" tall; KEYWORDS: HISTORY OF, HORACE R. HOBART, WISCONSIN CAVALRY QUARTERMASTER, CHICAGO EVENING POST, CHICAGO EVENING MAIL, JACKSONVILLE DAILY JOURNAL, CHICAGO MORNING COURIER, RAILWAY AGE MAGAZINE, CHICAGO, ILLINOIS, PERSONAL FINANCES, TURN OF THE 20TH CENTURY, CHICAGO JOURNALISM, AMERICANA, HANDWRITTEN, MANUSCRIPT, DOCUMENT, LETTER, AUTOGRAPH, WRITER, HAND WRITTEN, DOCUMENTS, SIGNED, LETTERS, MANUSCRIPTS, HISTORICAL, HOLOGRAPH, KEEPSAKE WRITERS, AUTOGRAPHS, PERSONAL, MEMOIR, MEMORIAL, ARCHIVE, DIARY, DIARIES, JOURNAL, LOG, ANTIQUITÉ, CONTRAT, VÉLIN, DOCUMENT, MANUSCRIT, PAPIER ANTIKE, BRIEF, PERGAMENT, DOKUMENT, MANUSKRIPT, PAPIER OGGETTO D’ANTIQUARIATO, ATTO, VELINA, DOCUMENTO, MANUSCRITTO, CARTA ANTIGÜEDAD, HECHO, VITELA, DOCUMENTO, MANUSCRITO, PAPEL