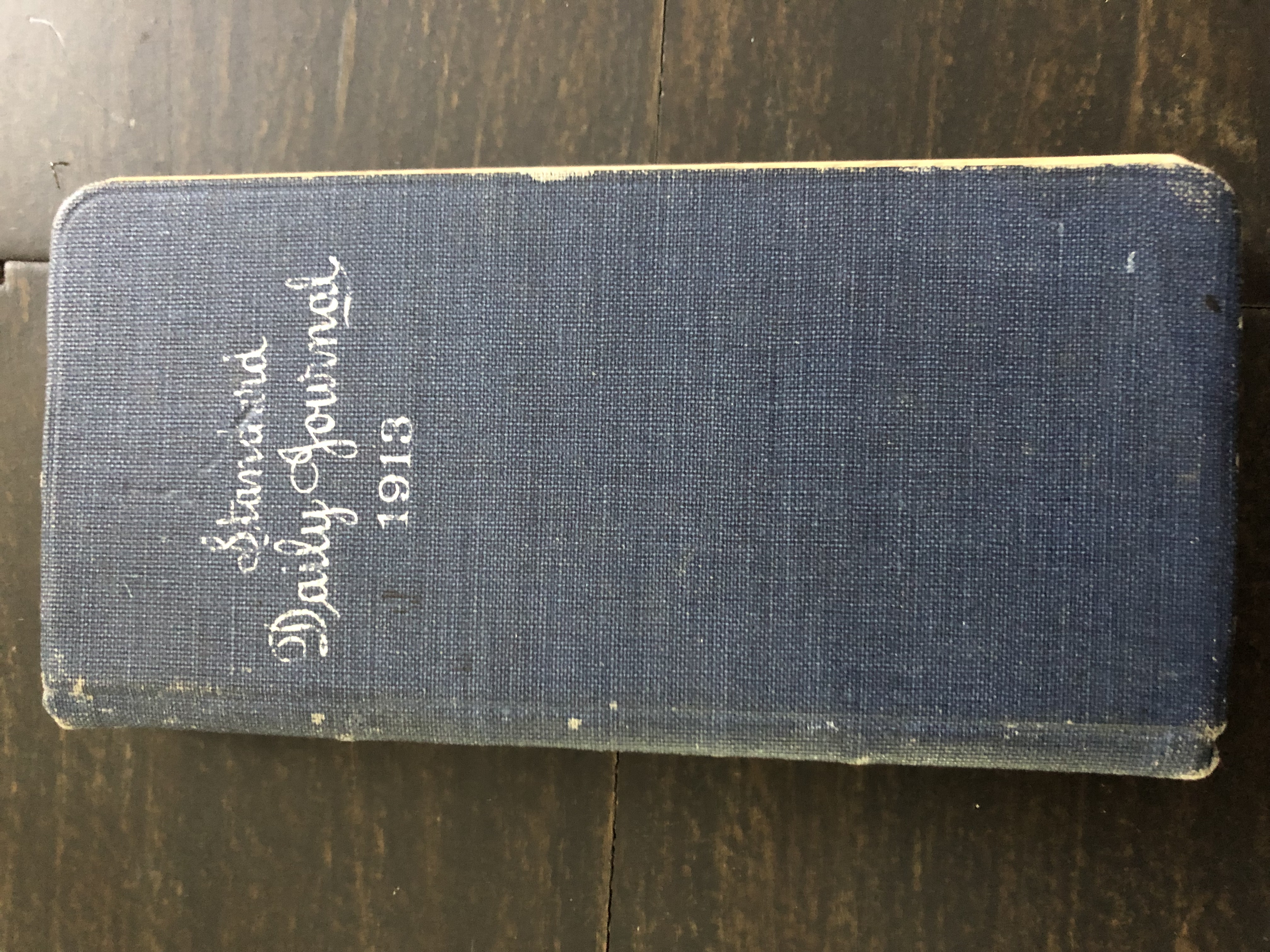 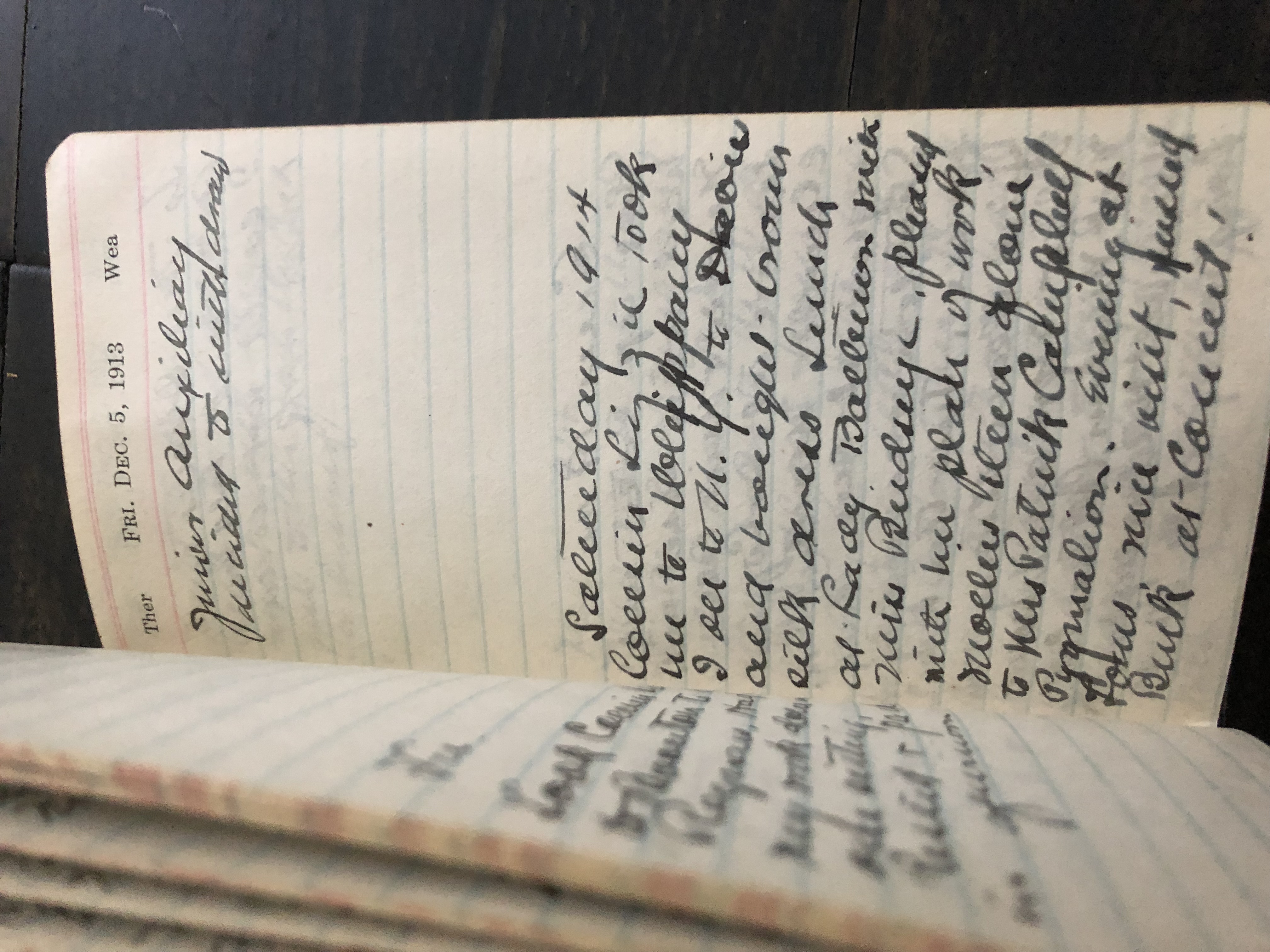 1913-1914 Diary of a Single Morris County, NJ Woman with Close Familial Ties to the Col Hiram Smith, Mayflower Settlers, and an Heir to the Smith/baldwin House, Writing As WWI Commenced

On offer is a very well-written diary of a New Jersey woman, written at the beginning of WWI This diary measures 6 inches by 3 inches and contains 365 pages. It is approximately 85% complete. The covers are in good condition with some light wear marks. The spine and binding are also in good condition as are the pages. The handwriting is legible. The author of this diary is Emily Caroline Smith. She lived in Boonton, NJ. She was born in April, 1876 and lived her entire life in Morris County, NJ. She passed away in 1956 at the age of 80. Smith is 37 when she writes this diary. The diary covers 1913 as well as a number of entries for 1914. On her mother's side, Smith was a direct descendent of one of the Mayflower settlers. Her paternal great grandfather was Col Hiram Smith. Smith was a veteran of the American Revolutionary War and afterwards, played a prominent role in his community. He was variously Justice of the Peace, County Judge, Sheriff of Morris Co, member of the NJ Legislature, Major and then Lt. Col in the New Jersey Militia. His son, Hiram Smith Jr. , Was a wealthy farmer and property investor. In 1833 he purchased a home that had been built in 1811. That house, known today as the Smith / Baldwin House, remained in the family until 2013, when the local government purchased it as a historical property. When he died, he left his estate to his son Richard, Emily's father. In time, Emily and her sister Marjory inherited the property. Emily sold her share to her sister in 1909. Some moments from Emily's diary are captured here: "Horrors. Another birthday! Did a lot of shopping in A. M. [ ] took O'Dally to the 4: 00 boat. ..." [Apr 5, 1913]; "Afternoon to Settlement House to help Deaconess. Called on Mrs. Anderson and Mrs. Barclay in the hospital. Evening played bridge with Capt. Colday, Miss [ ] and Luther." [Aug 5, 1913]; "Authors Reading for Hosp. Geo Ade and Sewell Ford read from their stories." [Feb 18, 1914]; "Rainy day - Marjorie came up in A. M. ... Sue and I went down home for supper. Back to [ ] in violent rain." [Nov 15, 1914]; "Marjorie came up for all day. We started the childrens comfortables. A stormy day." [Dec 9, 1914]. For a local historian, this is an excellent direct connect to a family with a long history and deep roots in their community. For a researcher in Women's Studies, this diary offers a very good look at the world of a single, relatively well-off woman at the turn of the last century and the attitudes and expectations prevalent at that time.; Manuscripts; 32mo 4" - 5" tall; 365 pages; KEYWORDS: HANDWRITTEN, MANUSCRIPT, DOCUMENT, LETTER, AUTOGRAPH, WRITER, HAND WRITTEN, DOCUMENTS, SIGNED, LETTERS, MANUSCRIPTS, HISTORICAL, HOLOGRAPH, WRITERS, AUTOGRAPHS, PERSONAL, MEMOIR, MEMORIAL, ANTIQUITÉ, CONTRAT, VÉLIN, DOCUMENT, MANUSCRIT, PAPIER ANTIKE, BRIEF, PERGAMENT, DOKUMENT, MANUSKRIPT, PAPIER OGGETTO D'ANTIQUARIATO, ATTO, VELINA, DOCUMENTO, MANOSCRITTO, CARTA ANTIGÜEDAD, HECHO, VITELA, DOCUMENTO, MANUSCRITO, PAPEL, Emily C. Smith; Smith / Baldwin House; Hiram Smith; American Revolutionary War; Hiram Smith Jr. ; Mayflower Descendants; George Ade; Sewell Ford, Women's Studies, WWI, World War One, WW1, New Jersey, Americana, American life, New York women, wealthy women, single woman, pre-war America ; Signed by Author

Title: 1913-1914 Diary of a Single Morris County, NJ Woman with Close Familial Ties to the Col Hiram Smith, Mayflower Settlers, and an Heir to the Smith/baldwin House, Writing As WWI Commenced

1913-1914 Diary of a Single Morris County, NJ Woman with Close Familial Ties to the Col Hiram Smith, Mayflower Settlers, and an Heir to the Smith/baldwin House, Writing As WWI Commenced