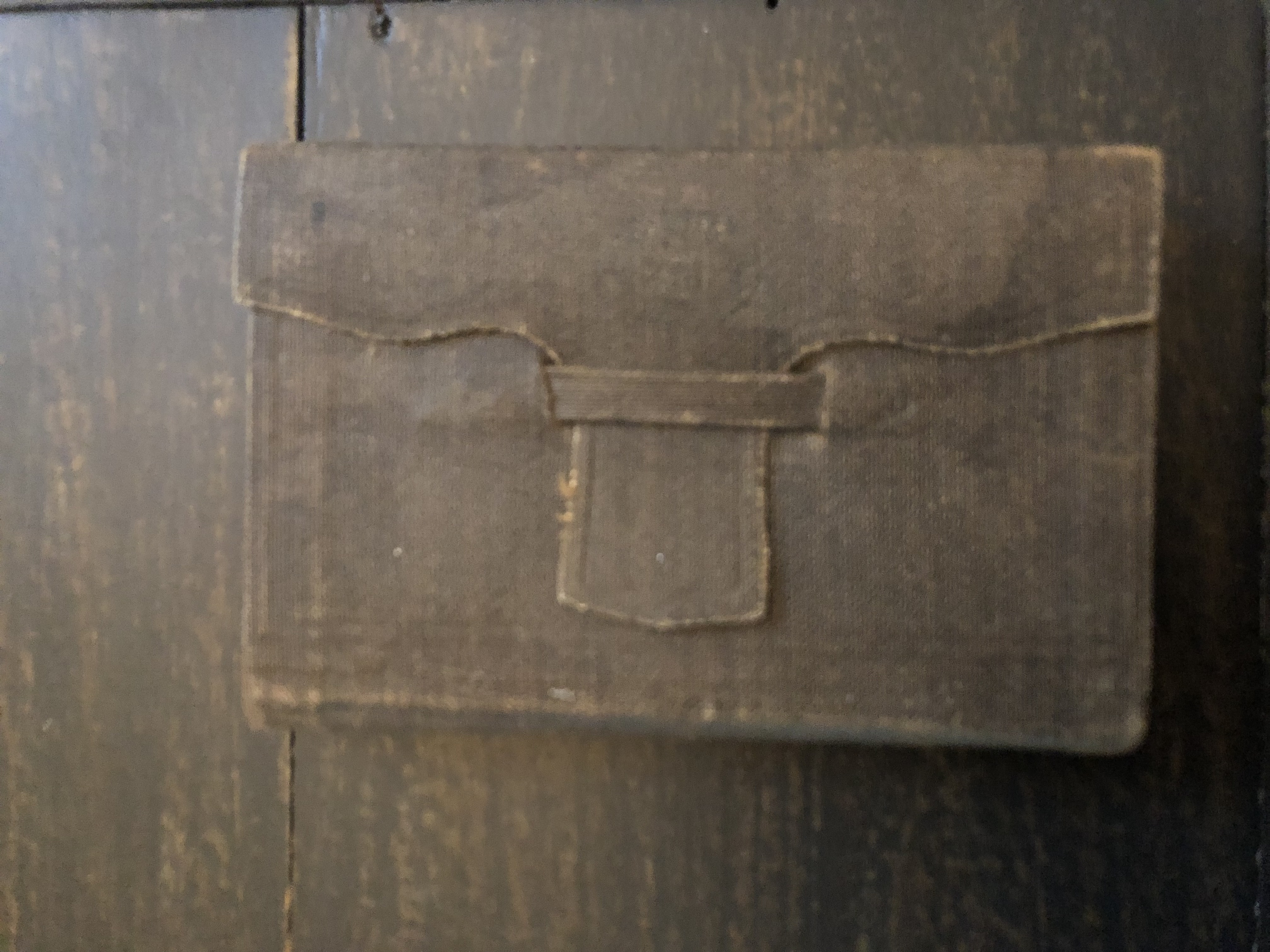 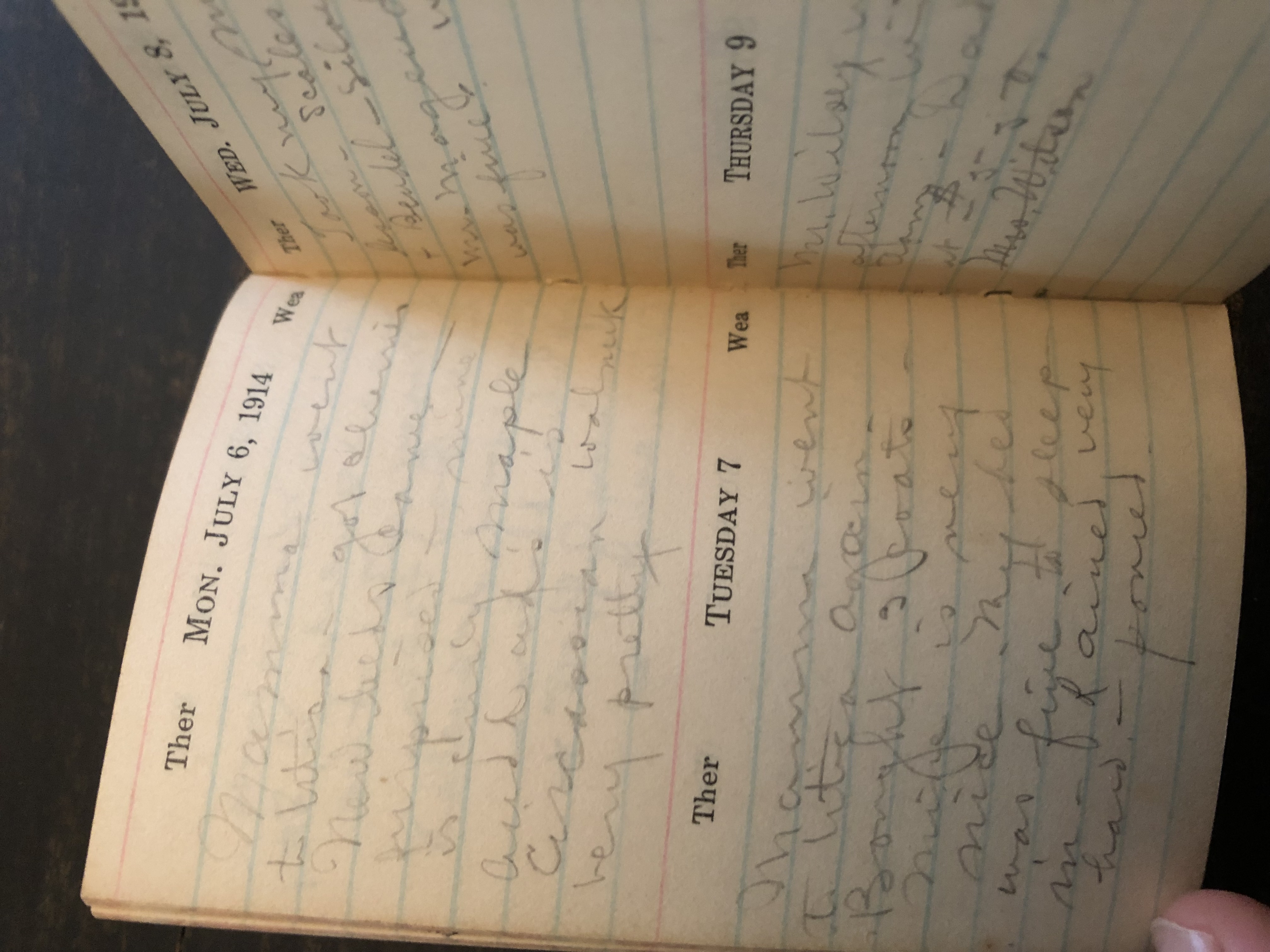 1914 Diary of a Teen Girl Whose Family Were Prominent Early Settlers in New York, Involved in the Suffragette Movement, Keenly Observant of Global Events

On offer is fine diary written by a young woman in upstate New York at the outset of World War One. The author of this diary is 18 year old Helen Meyer. She was born in Marcy, NY in 1896. Her grandfather was Mortimer Mayhew whose family had been early settlers in this area of upstate New York. Mayhew had once been the assessor and tax collector for Marcy and had served 7 terms as town supervisor. Her mother was Laura F (Mayhew) Meyer. She taught school and in 1890 was elected as School Commissioner for the First District of Oneida Co, NY. Our informal research has not discovered any additional biographical information about her. Helen is a very smart young woman who did very well in school. Her grades were high and she wrote of graduating from high school with honours. She studied music at the Utica Conservatory and often played piano at community events. She writes: "20 o below at 6 A. M. Coldest day this year. Nearly froze riding in the car this A. M. Clear day. Glee club meeting Concert on Feb 6 at Junior Entertainment. Took my music lesson. Fine. He says I am doing very well. Will play at more recitals. My new coat is great. Wore it first time" [Jan 13]; "Beautiful spring day - warm. Our reports out today. New system - took them to each class. I received A - A - A - B. Had fire drill the third period. Late - got 8 AM car. Clock wrong" [Mar 31]; "Tried Virgil and English. Not very easy. Tired out. Stayed at Hotel Utica to wait for M. Grade certificate at conservatory" [June 18]; "Took music lesson. Had trouble with scales. Mr Magenday had me order 'Clementi Sonatas. Had enthusiastic assembly over Rome game. Cheered and sang til 9: 15" [Sept 13]Helen was well aware of events happening in the outside world. She noted the U. S. Invasion of Mexico and the taking of Vera Cruz, the sinking of the Empress of Ireland in the St. Lawrence River and WWI: "War with Mexico. Vera Cruz taken by U. S…" [Apr 22]; "Decoration Day. Jane & I went to exercises at cemetery. About 60 present. "Empress of Ireland" sunk in St. Lawrence last night. Over 1,000 drowned. 2nd to Titanic." [May 30]. She was certainty progressive in her thinking, being elected as 'Class Suffragette'. In fact, the term 'suffragette' is mentioned a number of times in her entries. She displays a wry sense of humour as well: "Dance. Fine night. Rained this AM. Had some good dances. I am not going to play for dances if no-one dances with me." [Dec 30]. For a social historian, this is an excellent look inside the life of a quite mature older teenager. It would also be a good resource for a Women's Studies program as it directly addresses the existence of a Suffragette Movement that many think existed only in large cities. Measuring 4.0 inches by 2.5 inches, this small diary contains 183 pages and is about 85% complete. The cover is in good condition as are the spine and binding. The pages are in good condition as well and her handwriting is legible. ; Manuscripts; 32mo 4" - 5" tall; 183 pages; Keywords: handwritten, manuscript, document, letter, autograph, writer, hand written, documents, signed, letters, manuscripts, historical, holograph, writers, autographs, personal, memoir, memorial, antiquité, contrat, vélin, document, manuscrit, papier antike, brief, pergament, dokument, manuskript, papier oggetto d'antiquariato, atto, velina, documento, manoscritto, carta antigüedad, hecho, vitela, documento, manuscrito, papel,

Title: 1914 Diary of a Teen Girl Whose Family Were Prominent Early Settlers in New York, Involved in the Suffragette Movement, Keenly Observant of Global Events

1914 Diary of a Teen Girl Whose Family Were Prominent Early Settlers in New York, Involved in the Suffragette Movement, Keenly Observant of Global Events