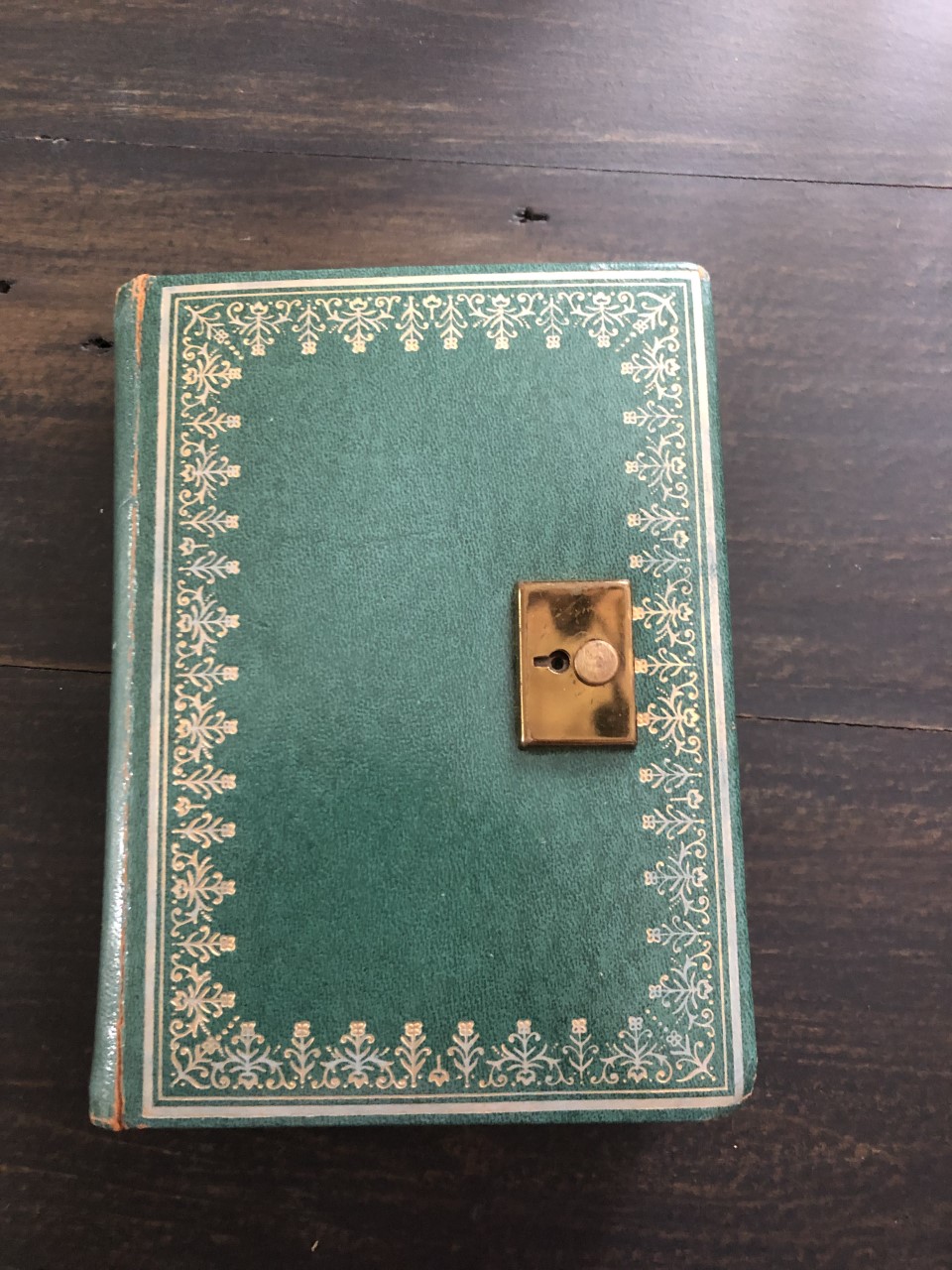 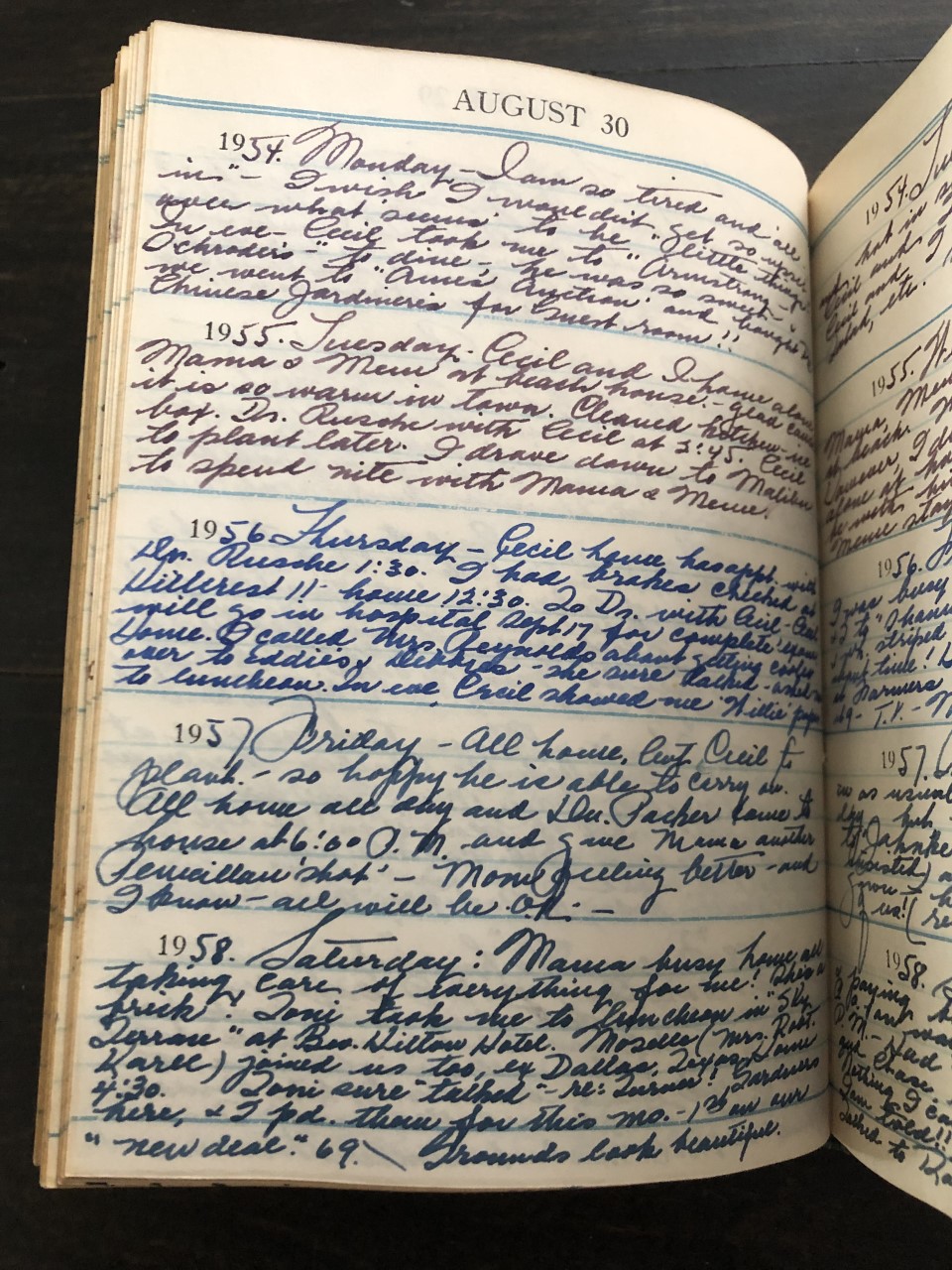 On offer is a wonderful 5 year diary kept by the wife of the Executive Vice-President of one of America's iconic corporations, Coca-Cola. The diary covers the years 1954 through 1958. The author of this diary is Ardis J. Barbee. She was born in 1907. Her adult life was spent in California, where she lived in Beverly Hills. She passed away in 1996 at the age of 89. She was 47 when she began this diary. Although her full name is not inscribed in the book, context clues confirm irrefutably that she is the author. Ardis Barbee married Cecil R. Barbee in 1949. He was born in Manhattan in 1889. At some point, he moved west to California. There, in 1923, he and his brothers purchased the Coca-Cola franchise for the city of Los Angeles and the surrounding area within a 50 mile radius. According to corporate records, he served as Executive Vice-President. The company was very successful. In 20 years, the Barbees had grown the business to 6 plants with some 575 employees. Sales were in the millions. Although Cecil was a very serious businessman, his 2 younger brother Stanley and Algernon, live flamboyant lives. Stanley, as President, was responsible for the construction of the company's head office - a nautical-themed building that remains an iconic location in Los Angeles to this day. Cecil Barbee was also an inventor with at least three patents to his name. From Ardis' diary, the reader can see that they lived well: "Didn't go to club today. Too busy - Mama out all day - [ ] took Mama, Wilma & Mae to luncheon at Miramar Hotel. Then for drive to "Hidden Valley". In A. M. [ ] with me to purchase my 2 big new outfits! Blue silk with black & white [ ] Hurrah! I did my hair. C & I drove home…" [Mar 12, 1954]; "Left for Palm Springs about 11 - Mama, Cecil & I for a well-earned holiday. I left my car at Cadillac 1 st to be repaired for damage on 24 th. Arr P S about 4 - To Casa del Camino - later to Tennis Club to "family nite" - super! To dine - Then to El Mirador hotel for cheer - heard [ ] sing. Bed 12" [Apr 29, 1954]; "Our Sixth Year anniversary and what a wonderful day. Cecil at plant all day - Mr Nicholson (Ch C. C. Board) to see him at 3: 00! . [ ] called in A. M - 1 st time since our marriage - mo other word ex his family ..." [June 16, 1955]. In 1955, her husband Cecil became ill. Eventually, he was diagnosed with cancer and many subsequent entries refer to how this impacts both he and her. Cecil Barbee would eventually succumb to the disease in April, 1958: "Our dear Cecil passed away at 2: 20 PM in Cedars of Lebanon Hospital. Mama, [ ] and I at his bedside ... Please give me the strength to carry on…" [Apr 7, 1958]. For a social historian, this is an outstanding look at life as lived in the booming post war years in California, especially by a well-off woman. Their connection to Coca Cola as distributors in one of the company's most lucrative markets, adds to the interest and value of this diary. This would be an excellent source reference to a Women's Studies program or research as it illustrates 5 consecutive years in the life of this well-to-do woman and her day-to-day life. The diary measures 6 inches by 4 inches and contains 365 pages. It is approximately 95% complete. The diary is in very good condition. The cover is intact although the clasp on the locking strap is missing. The binding is intact and all of the pages are in good condition. The handwriting is legible. ; Manuscripts; 32mo 4" - 5" tall; 365 pages; Keywords: handwritten, manuscript, document, letter, autograph, writer, hand written, documents, signed, letters, manuscripts, historical, holograph, writers, autographs, personal, memoir, memorial, antiquité, contrat, vélin, document, manuscrit, papier antike, brief, pergament, dokument, manuskript, papier oggetto d'antiquariato, atto, velina, documento, manoscritto, carta antigüedad, hecho, vitela, documento, manuscrito, papel, Corporate America, post-war America, Coca-Cola, franchisee, Barbee family, Stanley Barbee, Algernon Barbee, entrepreneurship, women's studies, wealthy family, Los Angeles industry, American dream, Americana, 20th Century America