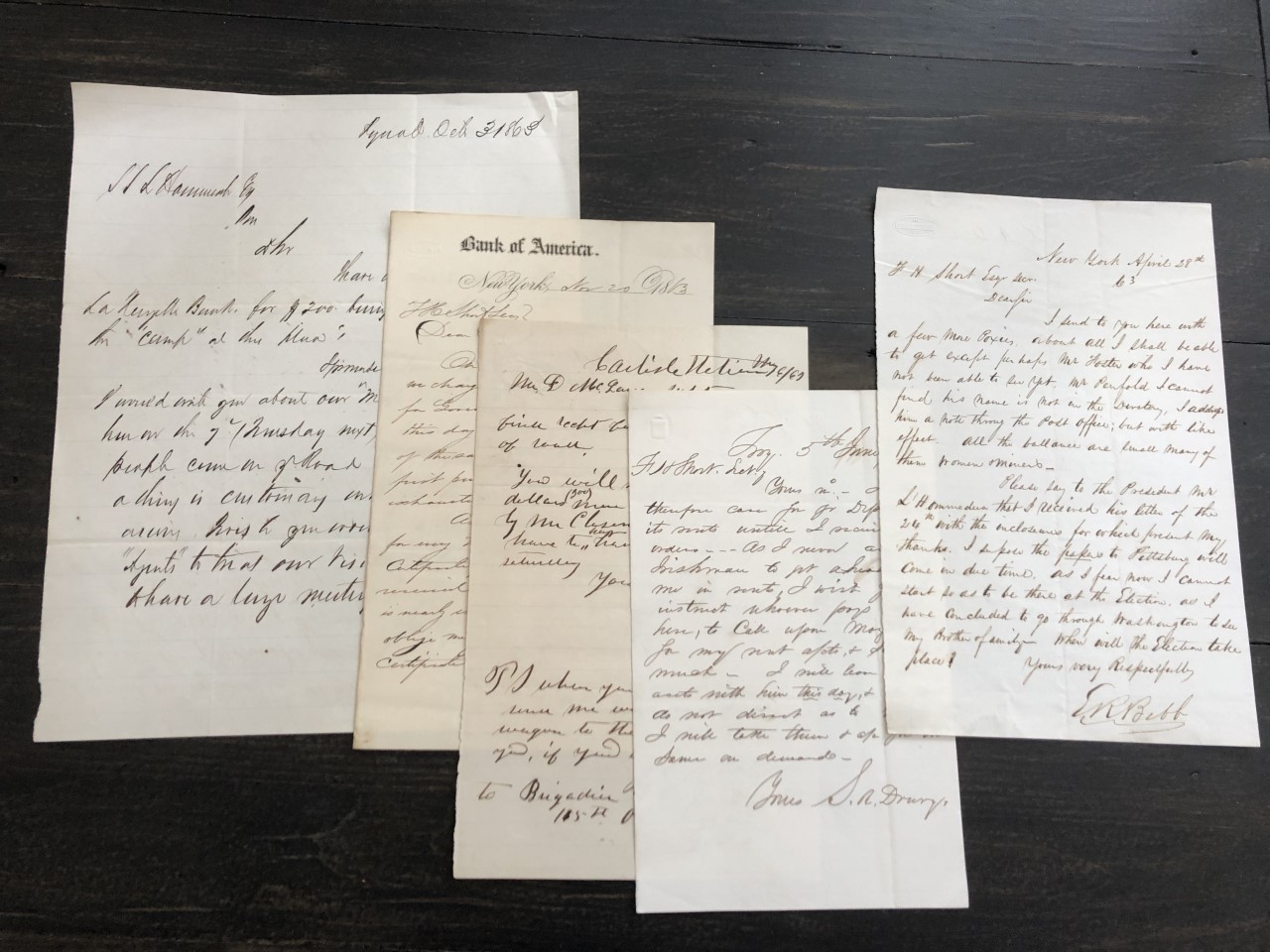 On offer is a unique collection of five letters that detail several financial transactions during the American Civil War. The first letter details a financial transaction between one J. C. Anderson and a Mr. D. McLaren. McLaren is identified further on in the note as "Brigadier of the 115th Ohio Volunteers". The 115th Ohio Infantry was organized Massillon, Ohio, and mustered in September 18, 1862, for three years service under the command of Colonel Jackson A. Lucy. After being raised, they were moved to Cincinnati, Ohio. They were assigned to duty by detachments as provost guard and guarding forts, arsenals, store houses, and magazines at Camp Chase, Camp Dennison, Maysville, Covington and Newport, Kentucky, and Cincinnati, Ohio, until October 1863. They were then ordered to Chattanooga, TN, then to Murfreesboro, TN. They were stationed at Murfreesboro and along line of the Nashville & Chattanooga Railroad, in block houses and at bridges until June 1865. The Regiment was specially selected for this arduous duty because of the great number of skilled mechanics and artisans in its ranks. They were involved in actions at Cripple Creek, Woodbury Pike, the siege of Murfreesboro, "The Cedars" and Lavergne. The Regiment was mustered out of service June 23, 1865, at Murfreesboro, TN. The letter, drafted in Carlisle PA on May 6, 1861 is addressed to a D. McLaren. In the salutation, he is referred to as Superintendent but further down the letter, he is addressed as Brigadier D. McLaren of the 115th Ohio Volunteers. Our research has not turned up anyone of that name who served in that rank in the 115th Ohio Volunteers. The letter requests the transfer of $300.00. The second letter is addressed to a Mr. F. H. Short and was drafted June 5th, 1862. It was written by a Mr. S. R. Drury. The letter concerns an apparent debt that is owed to Drury and steps he wishes to take to collect on it. It includes this interesting line: "As I never allow an Irishman to get ahead of me in pmts, I wish you to instruct whoever pays him to ..." . The third letter is also addressed to the same F. H. Short. It is dated in New York on April 28th, 1863. The writer is one E. R Bell. The letter concerns the attempt to collect proxies for a corporate election. In the letter, reference is made to a 'President L'Hommedua'The fourth letter, again addressed to F. H Short, on letterhead of the Bank of America. It was written by Robert Jaffray, Transfer Clerk at the Bank. The letter is dated Nov 20, 1863. In it, Jaffray advises Short that his account has been charged $20 for Government Stamps. He also states that the Certificate Book is nearly depleted. This refers to the share certificates that a company would issue to new shareholders. It appears that Short is using the Bank of America as his company's Transfer Agent. Our research has identified Robert Jaffray. Jaffray was born in Manhattan in 1824. He worked for the Bank of America in New York City. He passed away in 1902 at the age of 77. The fifth letter was written by S. R. Drury on Oct 31st, 1863. Directed to the addressee, whose name cannot be read, it advises of a meeting date and time and requests some details of attendees. For a historian, these letters hint at the range of banking business that was being carried out in the mid 19th century America. From covering payments to army units fighting in the Civil War to general corporate business, one can see the robust American banking system in play. The Bank of America can trace its roots back to 1784 and today is the second largest banking conglomerate in the United States. This is a fine collection of primary-source banking instruments from a turbulent and fascinating time in America's history. The letters are in excellent condition. The handwriting is in a copperplate font which offers challenges to the modern reader. However, the script is clearly written. ; Letters; 8vo 8" - 9" tall; 5 pages; Keywords: handwritten, manuscript, document, letter, autograph, writer, hand written, documents, signed, letters, manuscripts, historical, holograph, writers, autographs, personal, memoir, memorial, antiquité, contrat, vélin, document, manuscrit, papier antike, brief, pergament, dokument, manuskript, papier oggetto d'antiquariato, atto, velina, documento, manoscritto, carta antigüedad, hecho, vitela, documento, manuscrito, papel, 115th Ohio Infantry, Bank of America, American Civil War, Grand Army of the Republic, D. McLaren