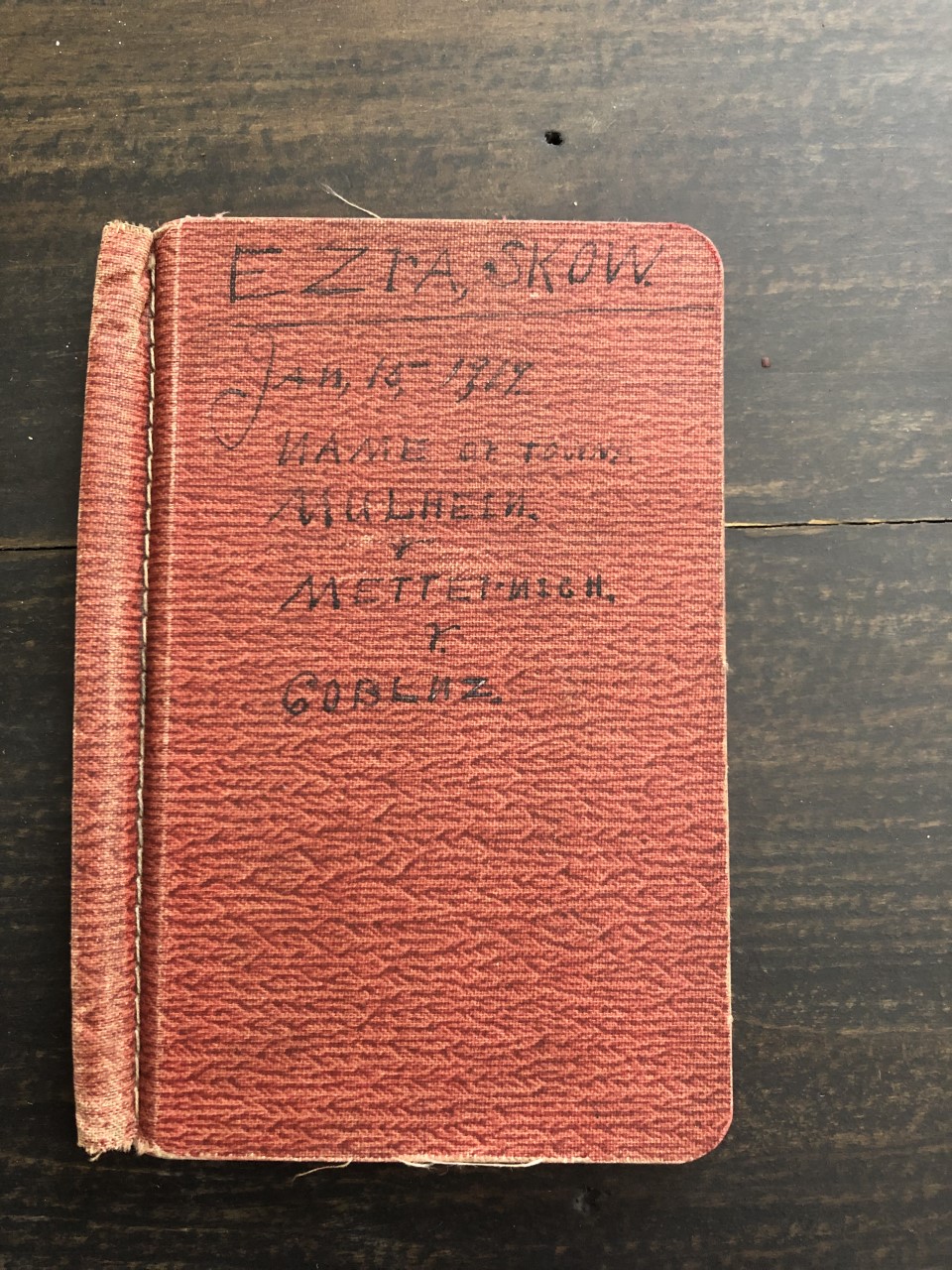 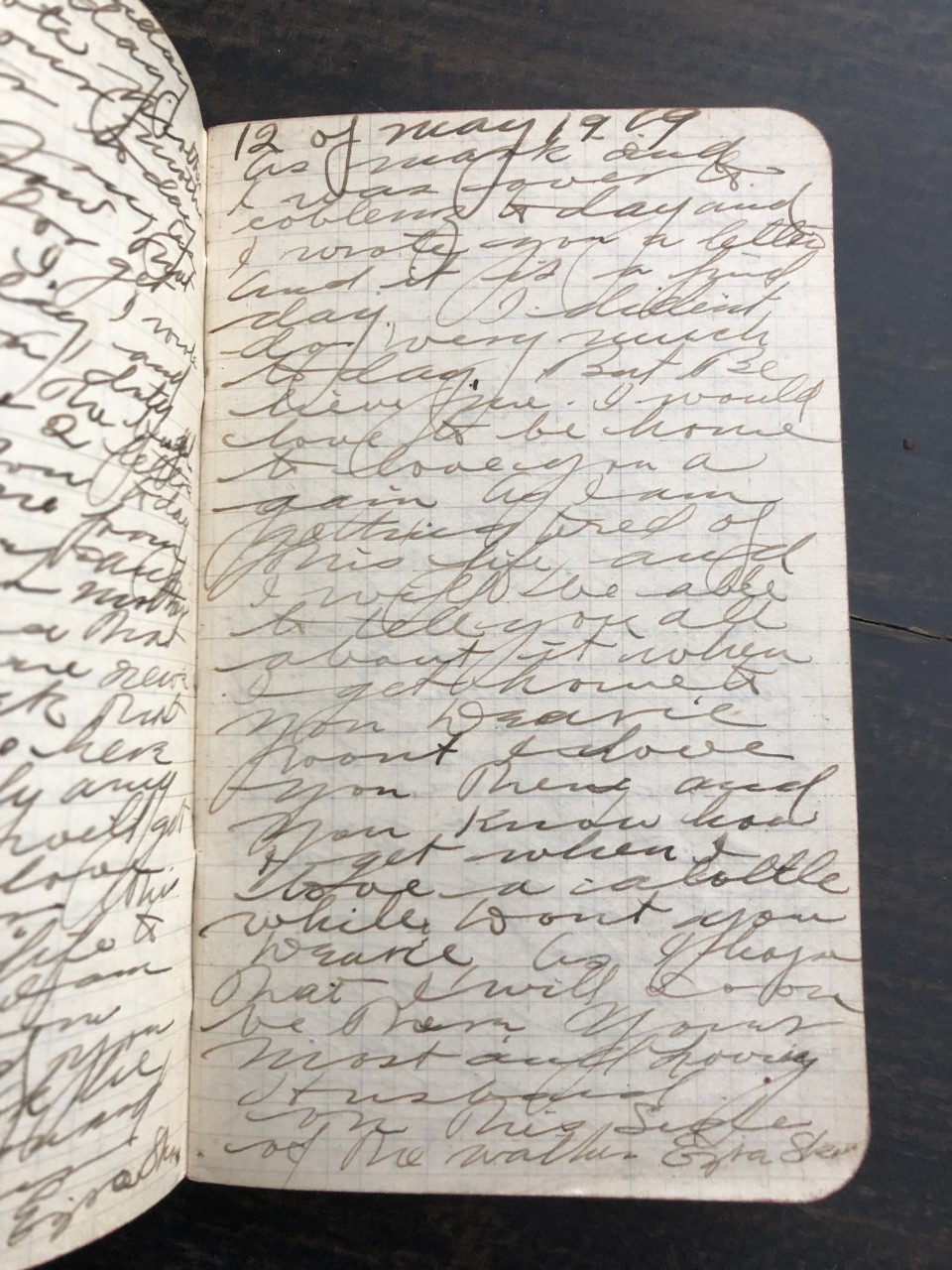 1919 Diary of American Soldier from the 56th Infantry, Ezra Skow, Stationed in Occupied Germany following WWI, Describing the Duties and Daily Life of a US Soldier

On offer is a superb pocket notebook kept by an American soldier in occupied Germany in the months immediately following World War One (WW1). The author of this notebook is Ezra Skow. Little is known of Skow's early life. He was born in 1892 and enlisted in the U. S. Army in about September, 1918 at the age of 25 or 26. Burial records in Benton PA indicate that he was attached to the 156th Infantry Regiment. However, there was no 156th Infantry in the United States Order of Battle in WWI. In his notebook, Skow records that he served in the 56th Infantry. This accords with the record of service of the 56th Infantry Regiment. The 56th Infantry Regiment was a regular infantry regiment in the United States Army. Its roots date back to the American Civil War where it served in the North's Army of the Potomac. It originated from personnel of the 17th Infantry Regiment in 1917 and fought in the region of Metz during World War I. In April 1919 a battalion of the 56th entered Metz as an honour guard for the Commanding General of the American Expeditionary Force, John J. Pershing. Skow was married before joining the army. His wife, Laura, lived until 1987, passing away at the age of 93. Skow himself died in 1947 at the age of 57. His entries take the form of letters to his wife. They cover the period Jan 11, 1919 through June 25 1919. In his diary, Skow records several of the towns and cities in which his unit was stationed including Metz, France, Mulheim, Metternich and other places in and around the city of Coblenz, Germany. His entries speak about the day-to-day existence of a private soldier: "This is some place. Gee, I wish I was home now. I would tell you a lot. The women are carrying their things on their back when they go to the store" [Jan 13]; "... I wrote you a letter tonight and send you the worlds clock too as I saw that today over at the city. And I was to see Charley Chaplin in the front line trenches and it was good. I would like to see you now. ... I sit here at a Dutch table now writing notes and the Dutch man is reading the paper and his wife is talking out of the front window and you can see they are like [ ] but not quite as bad. Your Husband Ezra Skow xxxx" [May 2]; "... I was over to Coblenz today and wrote you a letter. And it is a fine day. I didn't do very much today. But believe me I would love to be home to loved you again. As I am getting tired of this life and will be able to tell you all about it when I get home ... Your most [ ] lonely husband this side of the water. Ezra Skow" [May 12]. On June 4th, he writes that he has learned his unit is going to be leaving the Coblenz area and hopefully heading home to the United States. In fact, this is exactly what happened. By June 23rd, he is in Fort Dix NJ and on the 25th, he is out of the army. : "... I am out of the army now. Coming home to you dear..." [June 25]. There are several other pages of note which include, among other things, the names and addresses of several other men - likely men he met and befriended. For a historian, this is an outstanding piece of primary source material. It details the very ordinary day-to-day life of a soldier in WWI, capturing his duties and his longing for home. For a regimental historian, this fills in details of the history of their regiments. For a genealogist, it offers some links to other Americans who served in that regiment. Measuring 5.25 inches by 3.5 inches, this notebook contains 72 pages and is 85% complete. The book is in good condition. The binding and pages are intact. His handwriting is cramped but generally legible. ; Manuscripts; 24mo 5" - 6" tall; 72 pages; Keywords: handwritten, manuscript, document, letter, autograph, writer, hand written, documents, signed, letters, manuscripts, historical, holograph, writers, autographs, personal, memoir, memorial, antiquité, contrat, vélin, document, manuscrit, papier antike, brief, pergament, dokument, manuskript, papier oggetto d'antiquariato, atto, velina, documento, manoscritto, carta antigüedad, hecho, vitela, documento, manuscrito, papel, 56th Infantry, World War One, US Army, American soldier, Occupied Germany

Title: 1919 Diary of American Soldier from the 56th Infantry, Ezra Skow, Stationed in Occupied Germany following WWI, Describing the Duties and Daily Life of a US Soldier

1919 Diary of American Soldier from the 56th Infantry, Ezra Skow, Stationed in Occupied Germany following WWI, Describing the Duties and Daily Life of a US Soldier