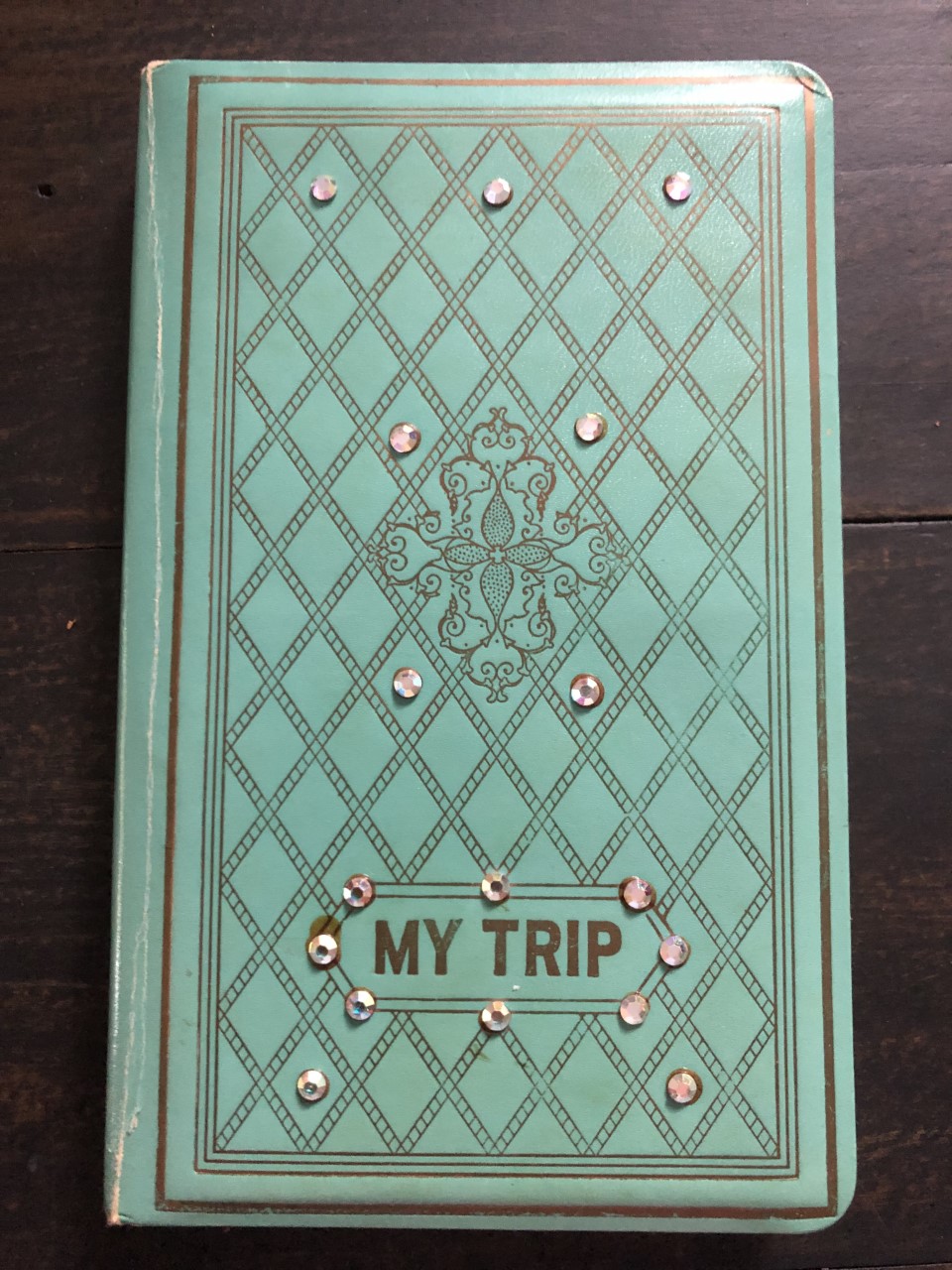 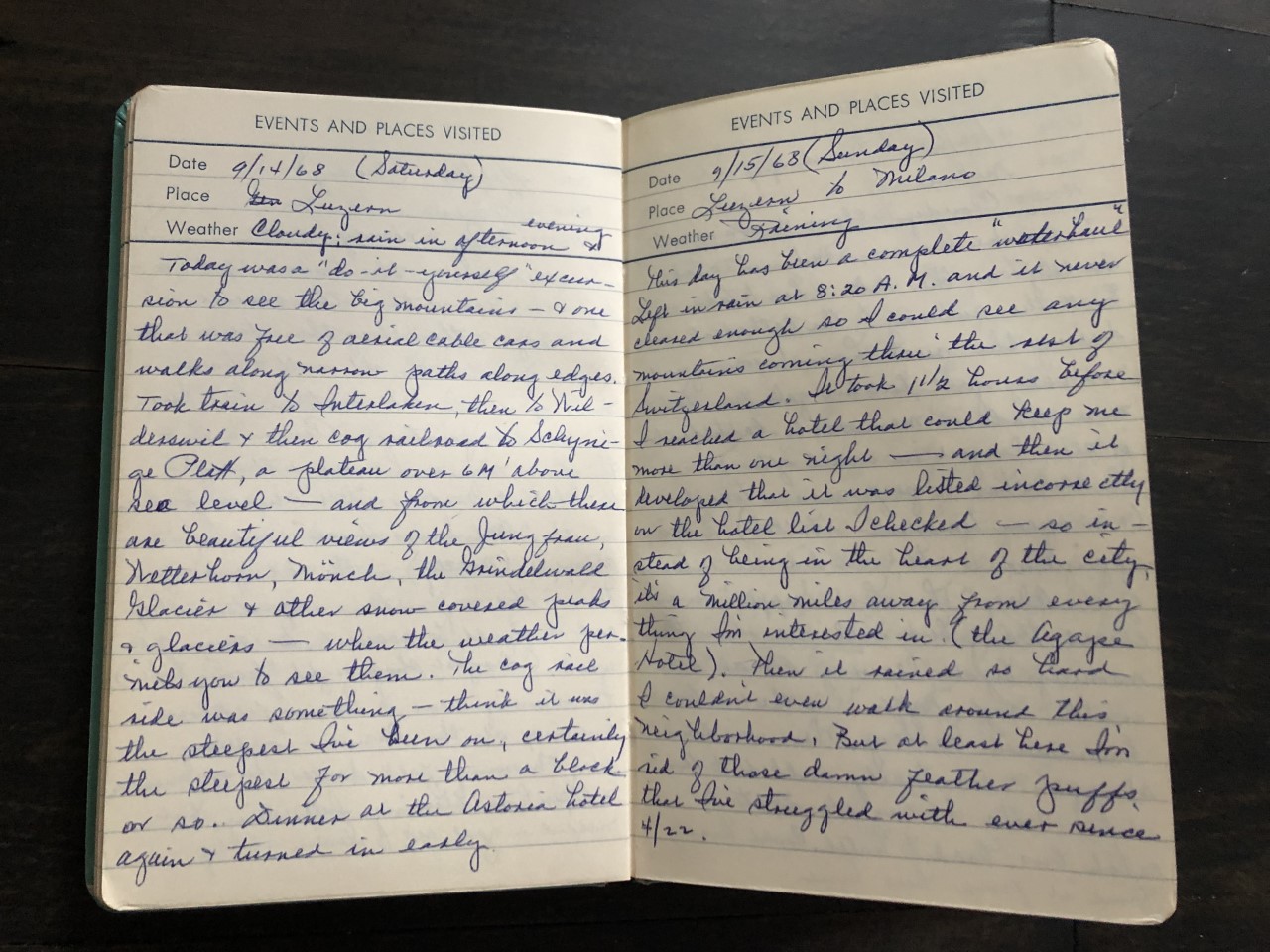 On offer is delightful travel diary describing a 6+ months long trip throughout Europe in the late 1960s. The author of this travel diary is Marion Estelle Drake. She was born in 1911 and lived her life in San Antonio TX. She passed away in 2003 at the age of 92. The diary covers an extended trip she took to Europe in 1968. She went by train to Port Everglades and there, on Apr 22nd, she and some friends boarded the TS Hanseatic for their trip. After a one-day stop in New York City, they sailed to Europe. After stops in Southampton and Cherbourg, she reached her final destination at Cuxhaven, Germany. From there, she crisscrossed Europe visiting major cities and places of interest: "Arrived Heidelberg 7: 15 AM. Betsy's friend Lt. Col & Masie Buchanan (Buck) met us... Buchanans took me to Officers Club in Patrick Henry Village ... They also picked up two friends from Okinawa now living in Bath England. ... Had dinner at Vogelswek Officers Club, then went to Officers Club at Ramstein AFB and then to Spinsadel for a beer. The Spinsadel (spinning Wheel) is in a building which dates from the 1600's" [May 4]; "Left Copenhagen by train at 7: 33 AM. Went to Helsingon where train was put on ferry for crossing to Halsingborg, Sweden. Route went through much of the lake country and was beautiful with all the fir and birch trees..." [June 19]; "Took another city tour this morning in another direction. Then at 2 PM took a tour to the Trossachs and Lock Lamond at Balmaha. The highlands country is beautiful & I'm sure the mountains are even more picturesque further north..." [July 28}; "When they raised the curtains on the ferry this AM we were at Corfu, a beautiful sight. All day we sailed along the Greek coast ... Arrived at Athens at 11: 25 PM & the cab driver couldn't find the hotel. When he turned down dark, dingy streets I was concerned..." [Sept 28]; "A 'tour' of the city turned out to be only the Royal Palace and the Prado Museum. ... Particularly enjoyed the Goyas...tho my favorite was Velasquez' Crucifixion. After lunch at the hotel, we headed for Salamanca" [Oct 10]. Her last entry is dated Nov 10th and has her still in Europe - back again to Paris. This is where her travel diary ends. This is a well-written travelogue that covers an extensive amount of western Europe. It offers an excellent description of a Europe that has completely rebuilt itself in the 20+ years following WWII. For genealogists, her diary is replete with names of friends and acquaintances ans well as people she met on her travels throughout Europe. Measuring 6.75 inches by 4.25 inches, it contains 66 pages of notes plus an address index. It is 100% complete. The cover is an aquamarine leather decorated with sequins and is in excellent condition. The binding is in good condition as are the pages. The handwriting is quite legible. ; Manuscripts; 8vo 8" - 9" tall; 66 pages; Keywords: handwritten, manuscript, document, letter, autograph, writer, hand written, documents, signed, letters, manuscripts, historical, holograph, writers, autographs, personal, memoir, memorial, antiquité, contrat, vélin, document, manuscrit, papier antike, brief, pergament, dokument, manuskript, papier oggetto d'antiquariato, atto, velina, documento, manoscritto, carta antigüedad, hecho, vitela, documento, manuscrito, papel, travel diary, post-war Europe, European travel, women's experiences, women's travel, single woman in Europe, ; Signed by Author