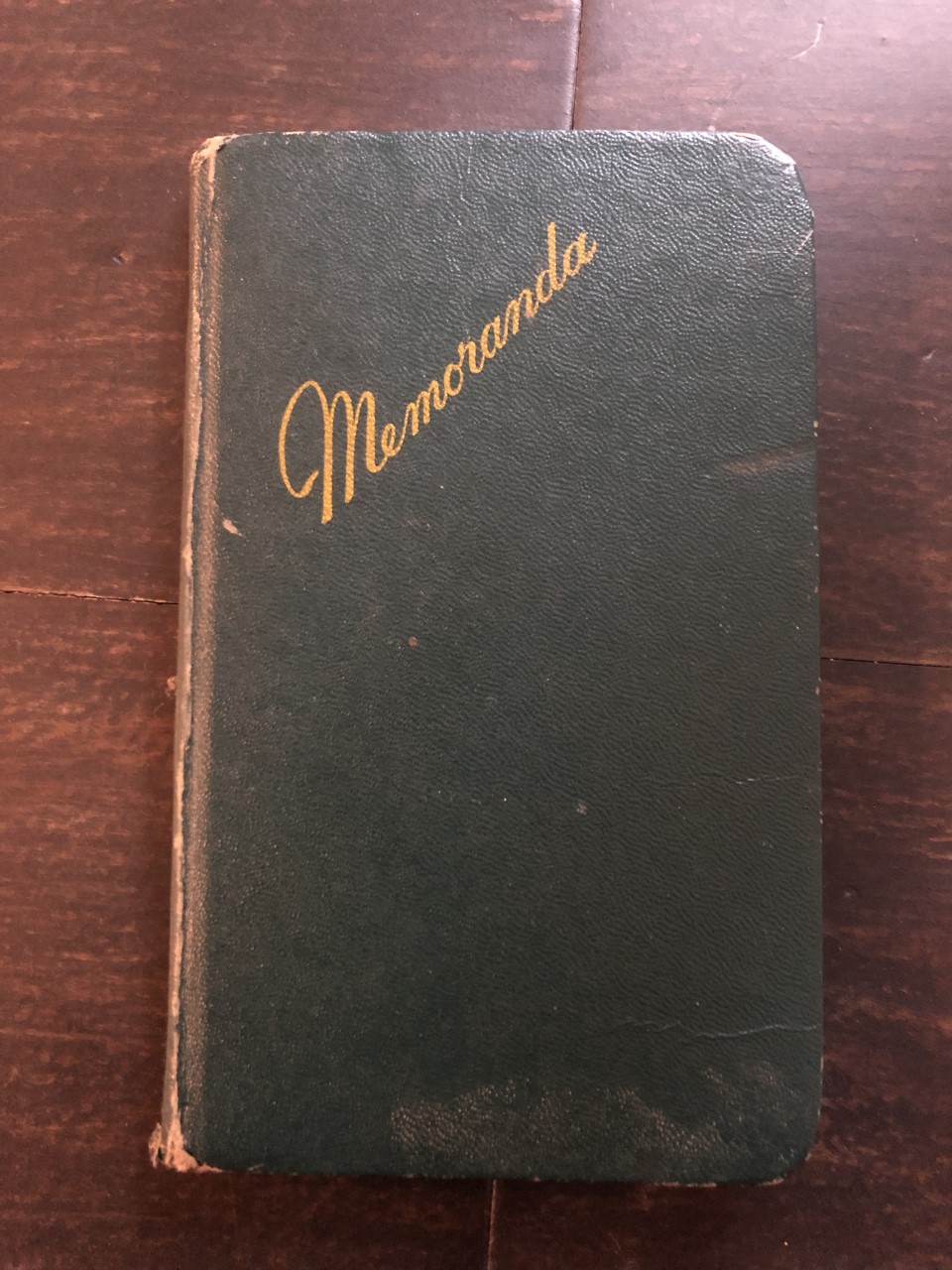 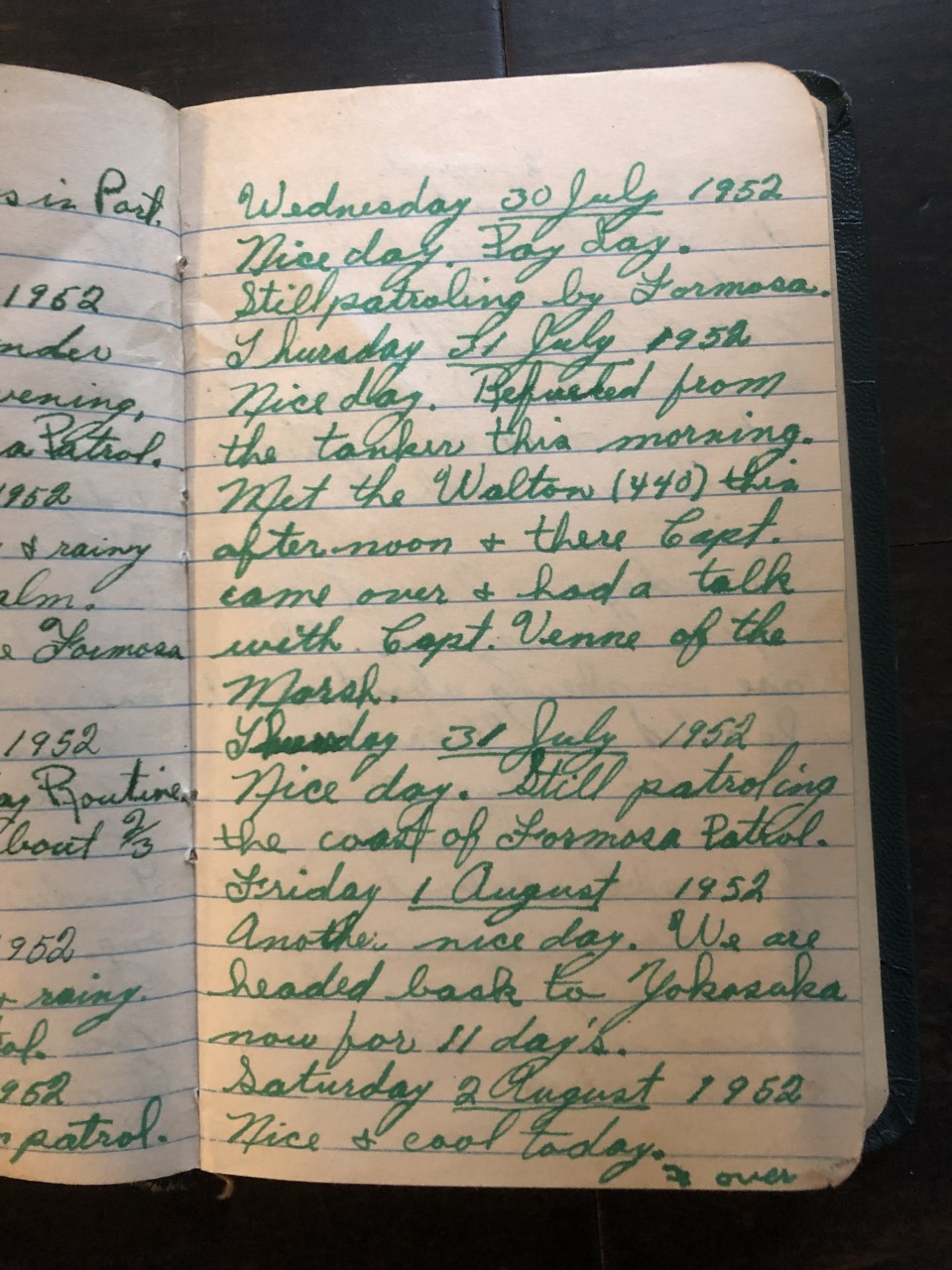 On offer is a fascinating first-hand account of a young American sailor in the Korean War. This slim notebook measures 6 inches by 3.5 inches and contains 136 pages. It is 10% complete. The cover, binding and pages are all in good condition. The handwriting is quite legible. The author of this notebook is Doyle O. Crain. Born in Tulsa, OK, Crain was 18 when he entered the United States Navy. Crain passed away in 2009 at the age of 75. Casual research had not turned up any additional biographical information. Crain's notebook begins on June 13th, 1952 and ends on August 6, 1952. He was posted to USS Marsh (DE 699) , a Destroyer Escort, in February, 1951. Marsh had been in Korean waters when Crain begins his entries. When Crain's journal begins, Marsh has been ordered to return to Okinawa for hunter-killer exercises, returning to Korea on 21 June. Taking up aircraft carrier screen duties, she operated with Bataan (CVL-29) and HMS Ocean in the Yellow Sea. In July, she again headed south, this time to serve with the Formosa Patrol, then on 22 August, returned to the battle line. She patrolled off the west Korean coast initially, but was moved to the east coast in late September to blockade. She participated periodically in the shelling of troop and transportation centers in the Songin and Wonsan areas. On 22 October, she sailed again to the Korean coast where she conducted patrols until steaming for Yokosuka and the United States on 14 November. In October, Marsh was involved in an action shelling shore batteries. In the engagement, she called for assistance and the Royal Canadian Navy destroyer HMCS Iroquois came to her assistance. In rendering that assistance, Iroquois was hit. USS Marsh did not offer assistance, and instead steamed away. According to some reports, RCN ships in Korea, from that moment on, rarely made requests for support; and those requests, whenever possible, excluded the ships of the USN. [Thunder in the Morning Calm, Brown, 2011]. Crain was rated as a Seaman (SN). Some examples of his entries include: "Nice weather today. Plane guard detail for carrier "Sicily" (118 CVE). 6 more days to Okinawa" [June 14]; "Got contact this morning with another sub at 0600. Not too good of weather this morning. Pay day today!" [June 15]; "Nice cool day. We are with the British carrier Ocean. The same ones we were with in Korea. We are supposed to be in Sasebo the 10 th of July" [June 22]; "The sea is very rough and it is raining hard - the wind is also blowing hard. We are going to refuel and then go on to the Worthington patrol tonight. It won't be no picnic" [June 28]; "The sea is very rough today and the wind is blowing very hard. We are with three other DE's - the Walton 361, McCoy Reynolds 440 and the Currier 700…" [July 20]; "Nice Day. Refuels from the tanker this morning. Met the Walton (440) this afternoon and their Capt. Came over and had a talk with Capt. Venne of the Marsh" [July 30]. This short notebook offers a fine view of the daily life of a US navy sailor during the Korean War. For a naval historian, if offers additional cross referencing for the location and roles of other warships serving in that theatre of combat. ; Manuscripts; 16mo 6" - 7" tall; 14 pages

Title: 1952 Diary of an American Seaman Posted to the USS Marsh During the Korean War