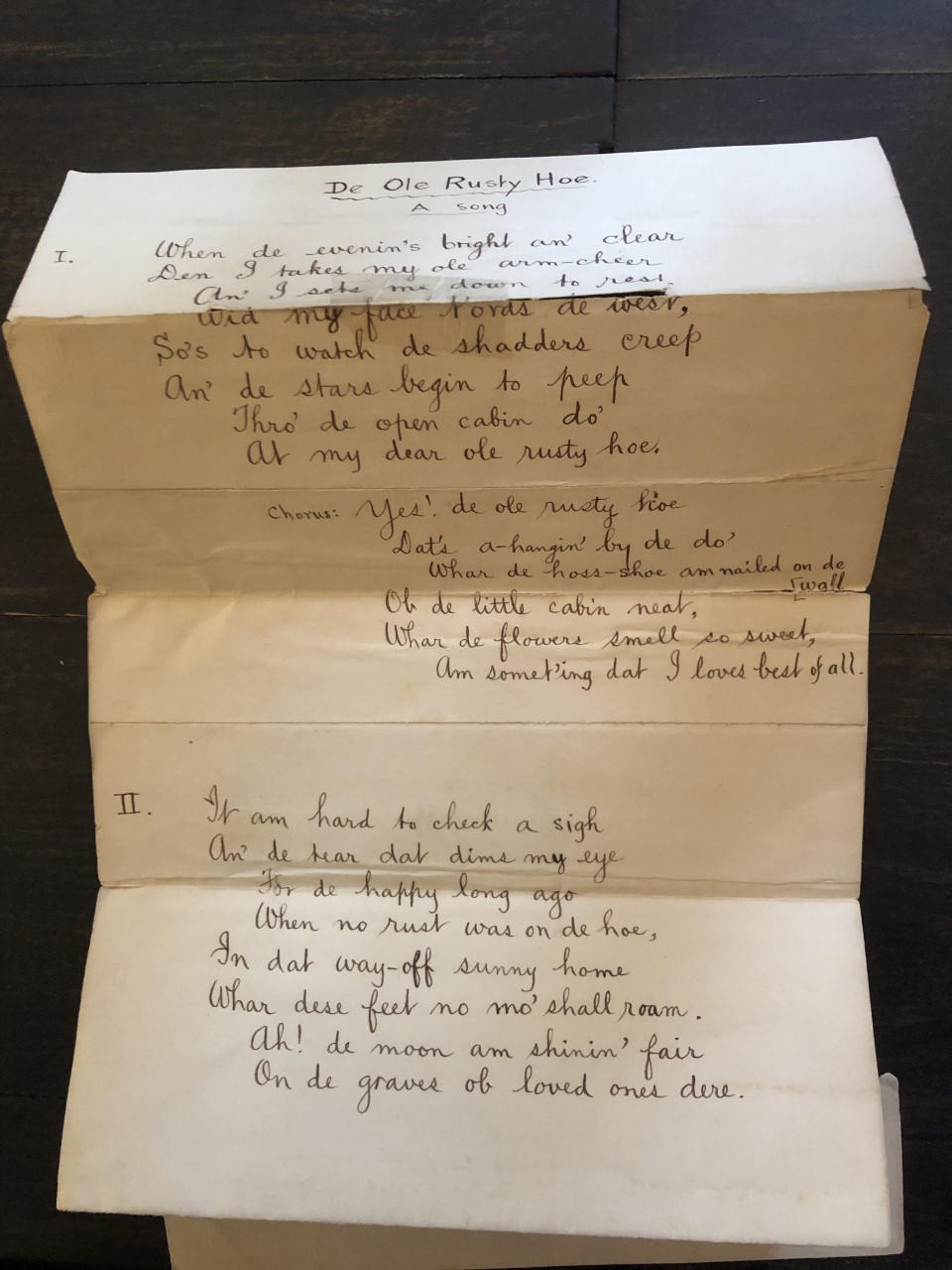 On offer is a fascinating example of African-American music dating from the late 19th century. This one-page piece of music is written on a page that is glued (either purposefully or through time) to a piece of letterhead from an American business college. It measures approximately 12.75 inches by 7 inches. The paper is in fragile state with some creases partially torn. All of the words are clear and visible and the handwriting is quite legible. The song is entitled DE Ole Rusty Hoe. The name C. R. Evans and the date, December 1894, are noted on the bottom, as well as on the reverse. African-American music as a genre grew out of the experience of Africans who were brought to the United States as slaves in the pre-Civil War years. A diverse range of music was developed. After the Civil War, ragtime became popular and this in turn led to the development of blues and later jazz. These 'plantation songs' as this one is described on the reverse, have their roots directly in work songs sung on the plantations of the Deep South in the United States. Singing while working had always been a part of the African culture and it was carried over to their life on the plantations. These songs were used to put rhythm into their work. Many were improvised and often used a 'call and response' pattern. They began to die out as the plantation system was broken up. However, some researchers suggest that they continued in the southern prison systems well into the late 20th century. Our informal research has found that C. R. Evans was a typing instructor at the Peirce College of Business. The song sheet is affixed to a piece of letterhead from Peirce College of Business. This institution, founded in 1865 immediately following the American Civil War, continues to this day in Philadelphia PA. This one is an excellent example of blues music rooted in the plantation experience: "It am hard to check a sighAn' de tear dat dims my eyeFor de happy long agowhen no rust was on the hoeIn that way off sunny homeWhar dese feet no mo' shall roamAh! De moon is shinin' fairOn de graves of loved ones dere" For a music historian, this is an excellent example of the type of music that formed the foundation for much of American music and genres. ; Manuscripts; 4to 11" - 13" tall; 1 pages