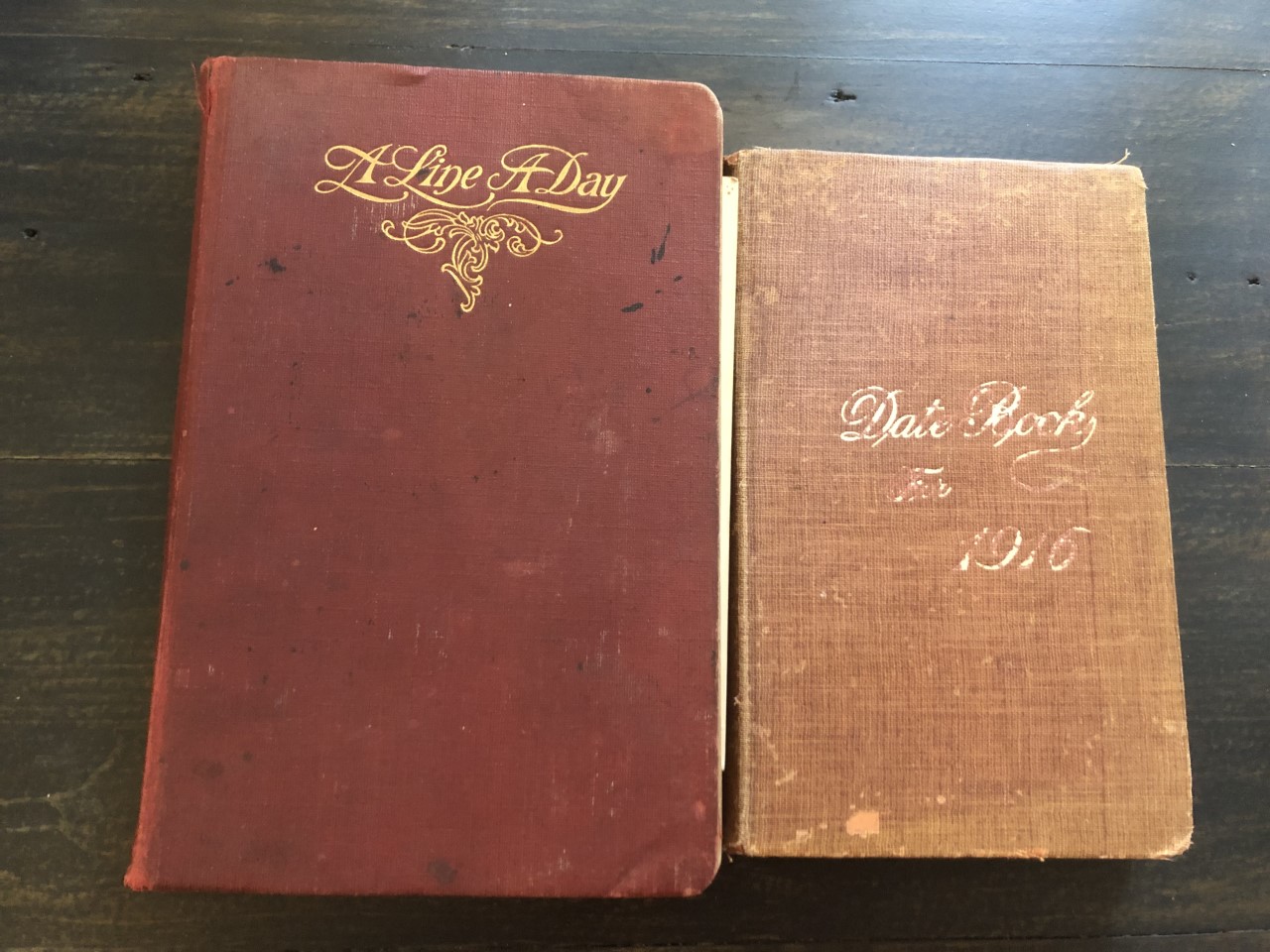 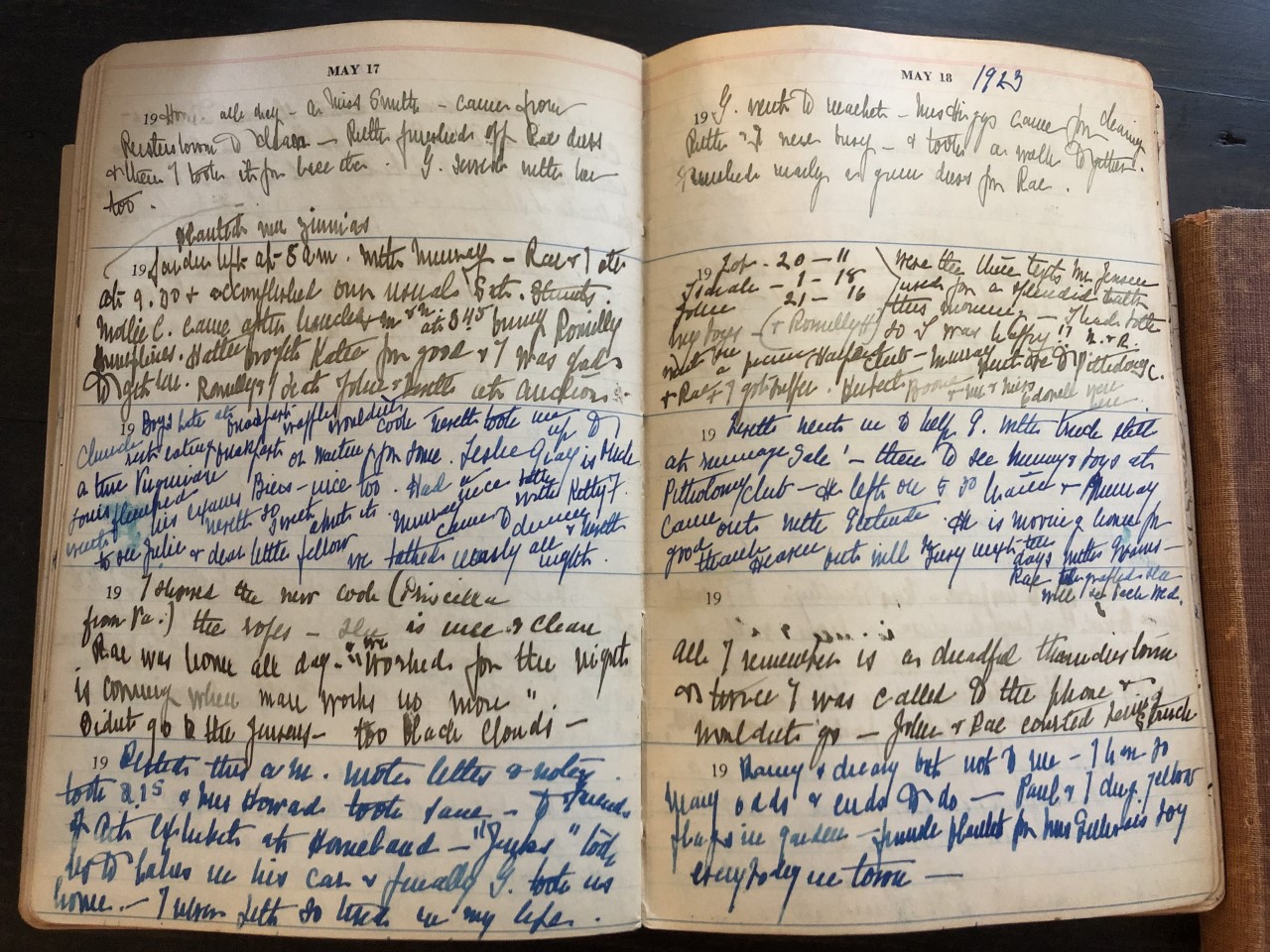 By: Gertrude W. B. Steele

On offer are two diaries written in the early years of the 20th century, written by Gertrude Steele, wife of Dr. John Murray Steele USN. Gertrude Steele was born in 1865 and passed away in 1931 at the age of 66. Her husband had graduated as a medical doctor from the University of Pennsylvania in 1875 and had immediately joined the U. S. Navy, rising to the rank of Commander. They lived in Annapolis, MD. Our informal research has not turned up any additional biographical information. The first diary dates from 1916. Her entries show that she enjoyed a good standard of living, reflective of her husband's standing in the community. Her entries are replete with the names of her many friends and acquaintances: "An ideal spring day - washed and shopping - then I met Connie Johnston and walked around with her to Carolyn's - & there C&D were so cordial & made us stay to lunch - I enjoyed it very much…" [May 12]; "Rae went to S>S with a little girl { } Jeffers and L & I went to see [ ] church. After tea, we walked to College grounds and then came back in time to hear Mus…" [July 2]; "I woke up from my day of pleasure [ ] putting in a full day today unpacking and selecting things…" [Sept 21]; "John took me to Rosewood where Dr. Herring (of State Lunacy Commission) spoke - then we went to Hatties to spend the night - as she is giving Rae a birthday dinner - just ourselves - was lovely - ghosts and spooks and cake with black cats…" [Oct 31]. The second diary is a 5-year diary covering the years 1923-1927. It includes the year that her husband died. It certainly shows that Steele had a wide social circle and that she was active in meeting and spending time with her friends. The diary is simply crammed with entries and margins were not off limits to her writing: "Busy as a bee - at 9 had to go to music lesson - J brought us some lobster salads for lunch - it was so good G & I went out to Hattie's [ ] was feeling badly…" [Feb 17, 1923]; "A heavy snow storm but John is going to sail on the "Allegheny" [Feb 19, 1924]; "Kate called for me in Hatties car. Took us to lunch ... M picked me up and George, B and I and Flynn & M took lots of things out to the country. They are next to [ ] all night. J and I played [ ]" [Mar 24, 1923]; "At 9: 30 A. M. John called ... We all came quickly ... Said he wanted a doctor ... At 12: 30 he was gone…" [Dec 19, 1927]. Throughout the dairies, there are newspaper clippings noting travels of individuals, attendees at balls, etc. These diaries paint an excellent picture of a woman's busy life in these early years of the 20th century. A social historian would find them simply packed with details of life among the more well-to-do members of her society. For a genealogist, it is a rich trove of names and connections, especially valuable as they are New England families where records are extensive. This is an excellent resource for a Women's Studies program as it very clearly shows the roles women played in that society at that time. The 1916 diary measures 7.5x5", contains 183 pages plus memoranda and is 100% complete and in good condition. The 1923-1927 diary measures 7.5x5", has 365 pages and is 100% complete. It is in fair to good condition. ; Manuscripts; 8vo 8" - 9" tall