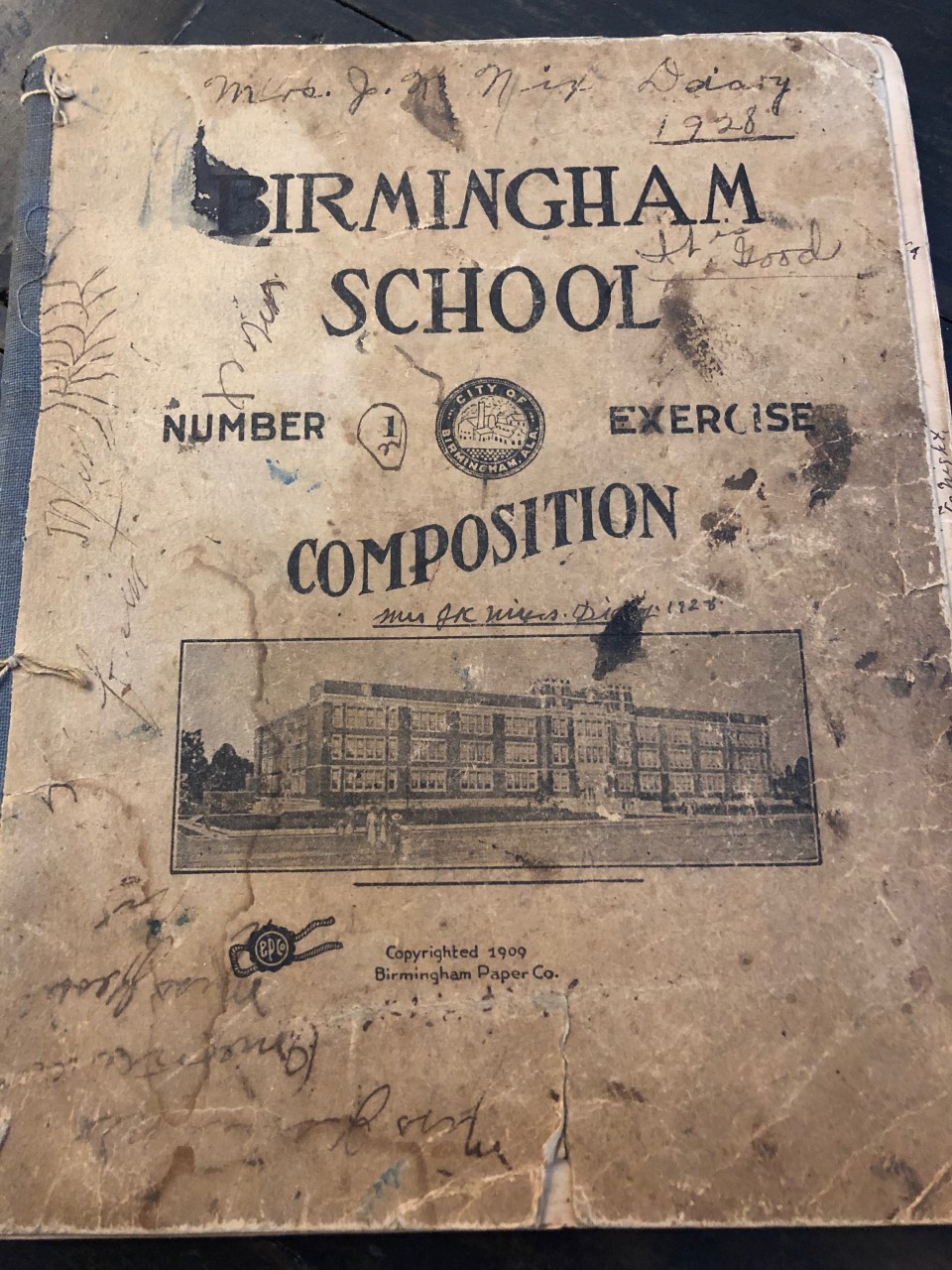 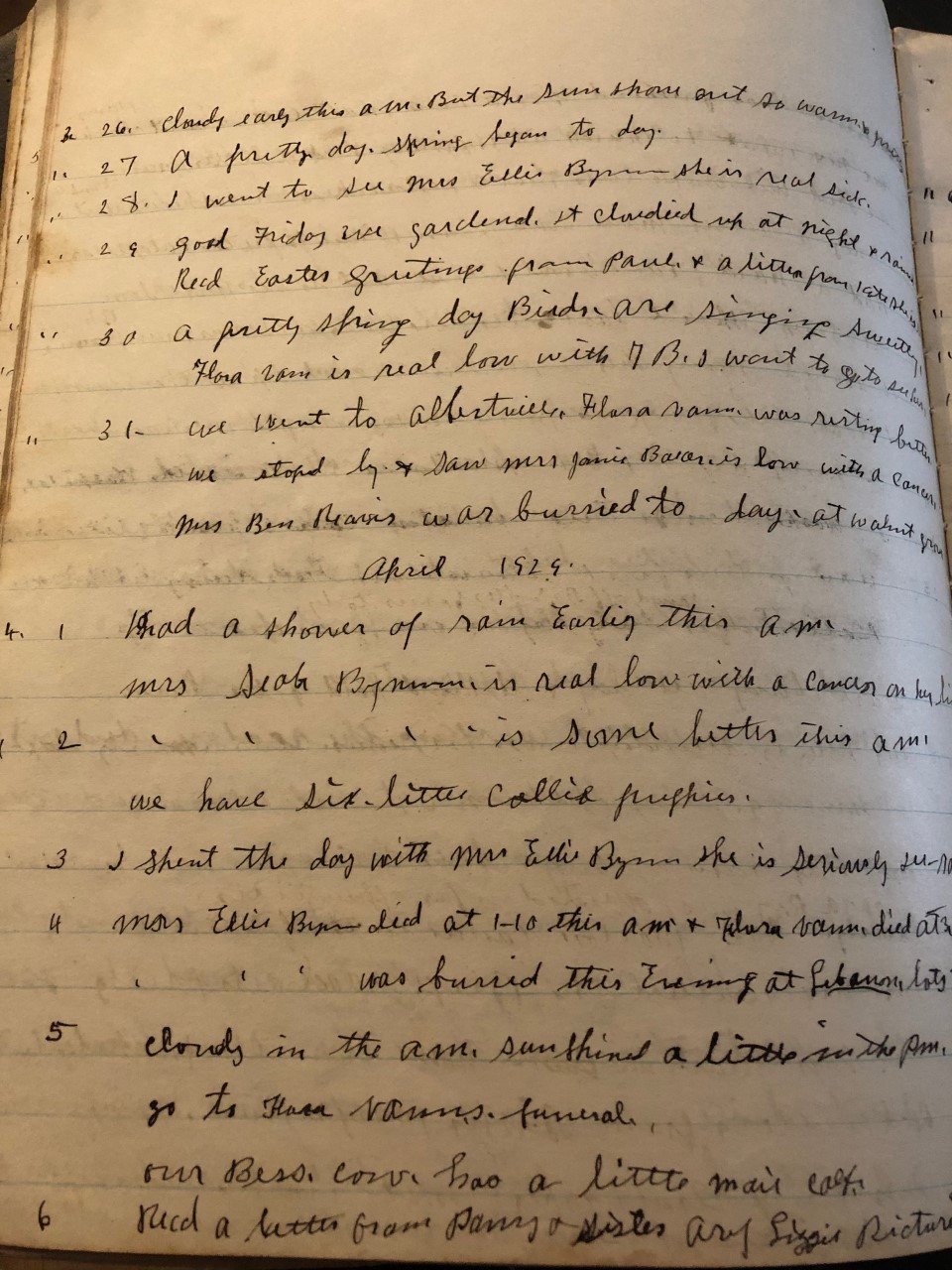 On offer is a diary written in the deep south of the United States in the depths of the Great Depression. The author of this diary was Lucy Thompson Nix. It covers the time period of January 1st, 1928 until February 5th, 1932. She was married to Rev John Kelly Nix and they lived in Blount County, Alabama. Research shows that she had two children - a daughter who died in 1904 at the age of 5 and a son who died in 1906, also at the age of 5 years. Her husband is noted in records as being the postmaster. The diary records him doing road work throughout their area. Born in 1863, Nix was 64 when she began this diary. She lived until 1948, passing away at the age of 83. The entries are brief, many being only one sentence. Taken as a whole, they paint a picture of life in rural Alabama during the Great Depression: "Mr. Nix is still attending Common Court. Measles raging in Altoona." [Jan 6, 1928]; "Mr. Nix has gone to work on the roads. [ ] came to sell us a car. Mr. Nix bought a car today. How I do wish he had not." [Jan 30, 1928]; "Had the biggest hail storm last night and rain that I ever saw. Stones as large as partridges. The ground was white like snow where it drifted. There was hail stones on the ground late this evening. Mrs. Zula Foster and Mrs. Dona Higgins was around getting up a collection from every house to help build Union Hill Church that burned recently. Still dark and cloudy." [Mar 14, 1928]; "Having our first strawberries. Looks rainy, did sprinkle. Katie Edges baby boy is one year old today." [Apr. 13, 1929]. She notes the inauguration of Herbert Hoover on Mar 4th, 1929 but the great Wall Street Crash which signaled the beginning of the world-wide depression passes without notice: "A dark, cloudy day so Mr. Nix didn't work the roads." [Oct 28, 1929] She was hospitalized for three months in Birmingham, AL for an unspecified illness and returned to her quiet life: "My 67 th birthday and I had to eat dinner by myself." [Oct 17, 1930] She notes the anniversary of her daughter Mary's death: "Our Mary, daughter died in 1904 on March 20 of pneumonia." [Mar 20, 1930] Throughout her diary, her entries are replete with notes of births and deaths in their county. The inside back cover records a number of names and addresses. This is a very simple diary kept by a woman who was very focused on life within her immediate sphere. It is a rich source of information for genealogists and local historians for the depth of information on local residents such as birth and death. It paints a very good picture of life in rural Alabama at this time and would be an excellent resource for a women's studies program or a social historian. Measuring 10 inches by 8 inches, this notebook has 66 pages. The paperboard cover is stained and worn in places but otherwise completely intact, as are the pages within and the binding. The handwriting is legible. ; Manuscripts; 8vo 8" - 9" tall; 66 pages; Keywords: HANDWRITTEN, MANUSCRIPT, DOCUMENT, LETTER, AUTOGRAPH, WRITER, HAND WRITTEN, DOCUMENTS, SIGNED, LETTERS, MANUSCRIPTS, HISTORICAL, HOLOGRAPH, WRITERS, AUTOGRAPHS, PERSONAL, MEMOIR, MEMORIAL, ANTIQUITÉ, CONTRAT, VÉLIN, DOCUMENT, MANUSCRIT, PAPIER ANTIKE, BRIEF, PERGAMENT, DOKUMENT, MANUSKRIPT, PAPIER OGGETTO D'ANTIQUARIATO, ATTO, VELINA, DOCUMENTO, MANOSCRITTO, CARTA ANTIGÜEDAD, HECHO, VITELA, DOCUMENTO, MANUSCRITO, PAPEL, deep south, Alabama, Blount County, Great Depression, Church history, Baptist Church, elderly diarist, women's studies, women authors, women diarists, rural America, rural Alabama, rural southern states ; Signed by Author