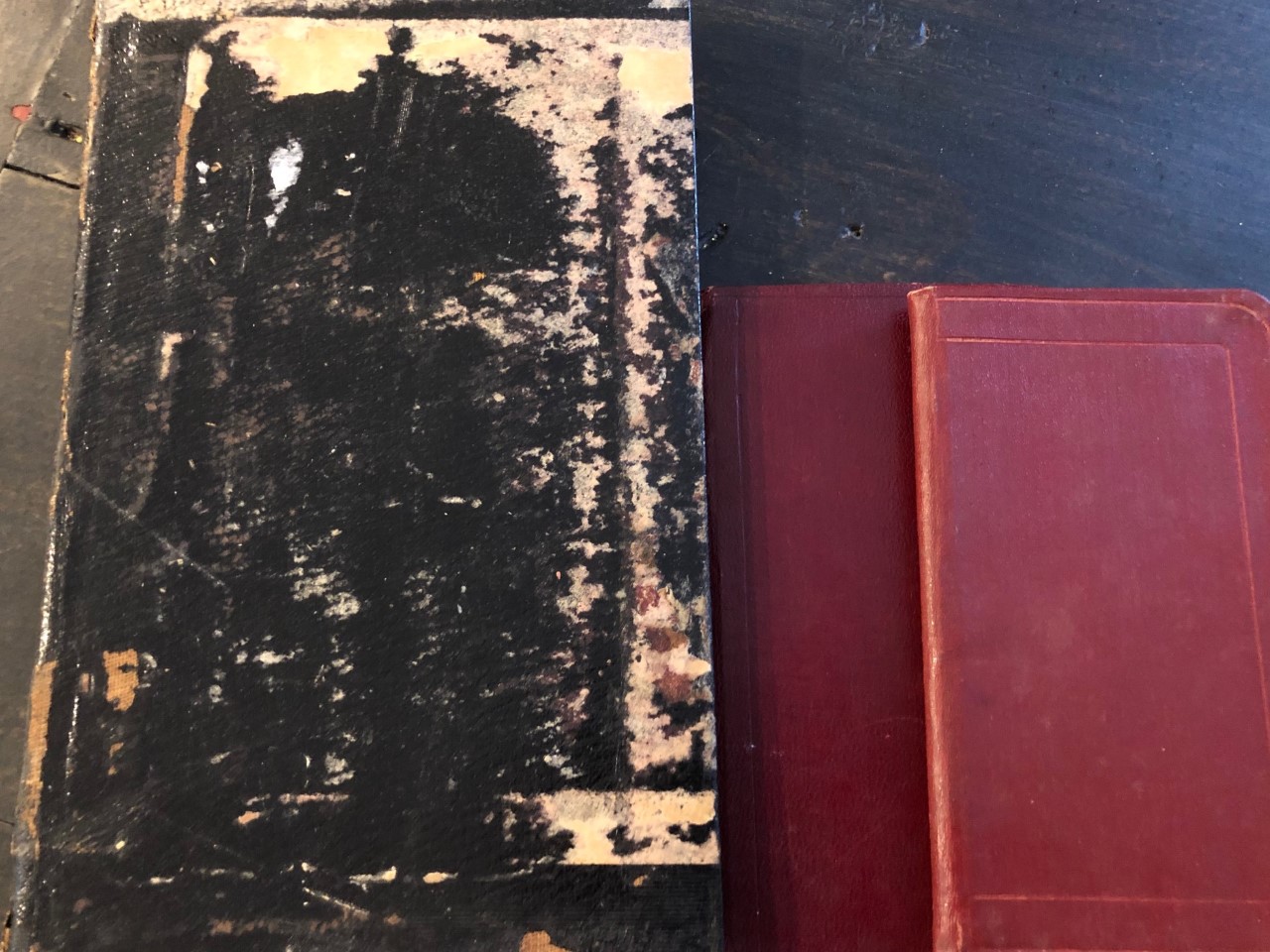 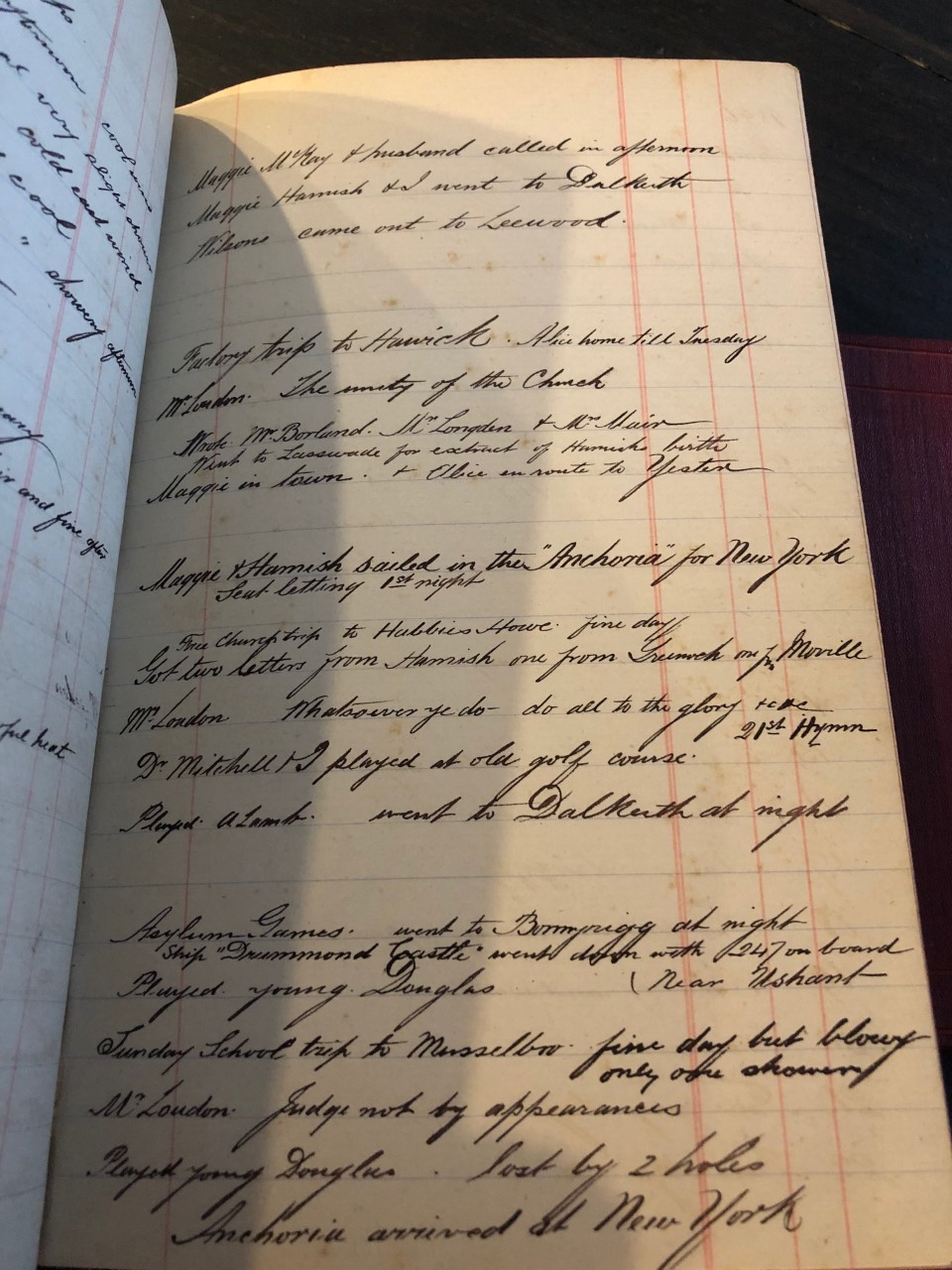 1895-1915 Handwritten Diaries Chronicling Scotland to USA Immigration and the Subsequent Daily Life of a Politically and Religiously Involved Immigrant in New Hampshire, USA

On offer is a set of three diaries of James Roger, a British immigrant to the United States in the late 19th century. Roger was born in England in 1841. He was a clerk in Birmingham, England, and entered the railway service in 1866, becoming the station master at Rosslyn Castle near Edinburgh for 31 years. He was married in 1867 and he and his wife Margaret had six children. He was ordained an elder in the Established Church (Presbyterian) of Scotland in 1878 and elected a member of the General Assembly in 1896. He came to America in 1897 and settled in New Ipswich, New Hampshire, where he had a duck farm. He also served as a member of the school board, a superintendent of the Congregational Sunday School and a deacon. He passed away in 1916 at the age of 75. There are three journals that he kept. The first one cover the time period from July 1st, 1895 to Oct 6th, 1897. It includes the daily log of his journey via steamship to the United States. The second journal is a pocket notebook that contains entries from the years 1902 until 1911. The third journal covers the year 1915. The first journal contains an account of his daily life in Scotland from July 1895 until Oct. 1897, The entries are brief, many just one-line entries. The entries for each month are followed by a brief summary of the month: "Dull then fair. International boat race. Defender won by 9 minutes. Harvest cutting going on all around" [Sept 7, 1895]; "In Roslin on the 14 th we had the unusual spectacle of a military funeral. Abram Pryde a volunteer was borne to his long home with all the pomp and parade attending a soldier's funeral. The Band playing "Land o the Leal" whilst his comrades marched with arms reversed and over his grave they fired their parting farewell" [Oct 14, 1895]. He notes events that are happening in other parts of the British Empire: "The Ashanti Campaign came to a bloodless termination. King Prempeh surrendered on the arrival of the troops at Kumasi and has been brought to the Coast a prisoner" [Jan, 1896]. On Oct 15th, 1897, at 56 years of age, Roger emigrated from Scotland to the United States with his wife and his six children. He describes in some detail their crossing on the steamer S. S. State of Nebraska "...My daughter the afternoon fell down the stairs of the companionway and hurt her ankle her mother turned sick at four. David was squeamish and poor Hamish who had suffered from asthma was very much exhausted. I was up all night amongst them…" [Oct 1897]. The second the diary continues from 1905 until 1911 and is an account of his daily activities including many references to his friends and family. There are many gaps in time between entries but overall, they convey a sense of the daily pattern of his life: "...Went to depot and met Mt. Milne, a Scotsman from Waverley Edinburgh. Left at 11: 47 for NY. Reached there at 3: 30. Took car to Ferry. Got tram to Oakdale 4: 35. Got there at 6 pm. Met by Sandy and Mary (his son-in-law and grand daughter). Went to Masonic meeting" [Oct 17, 1910]. The third diary covers the year 1915 and describes a good deal of New Hampshire political activity. These three journals offer a succinct description of daily life in Scotland and in New England. For a historian, they offer details on daily life at that time in both locations. As he notes many friends and acquaintances, they would be a valuable resource for genealogists A local historian would find the various discussions and motions listed in the third diary an interesting look at local politics in the early days of the 20th century. The first diary measures 7 inches x 4 inches and is in good condition, though the cover shows some wear. It contains 184 pages and is 70% complete. The second and third diaries both measure 4 inches x 3 inches. They each contain 112 pages and are 70-75% complete. These diaries are also in good condition. ; Manuscripts; 32mo 4" - 5" tall; Keywords: HANDWRITTEN, MANUSCRIPT, DOCUMENT, LETTER, AUTOGRAPH, WRITER, HAND WRITTEN, DOCUMENTS, SIGNED, LETTERS, MANUSCRIPTS, HISTORICAL, HOLOGRAPH, WRITERS, AUTOGRAPHS, PERSONAL, MEMOIR, MEMORIAL, ANTIQUITÉ, CONTRAT, VÉLIN, DOCUMENT, MANUSCRIT, PAPIER ANTIKE, BRIEF, PERGAMENT, DOKUMENT, MANUSKRIPT, PAPIER OGGETTO D'ANTIQUARIATO, ATTO, VELINA, DOCUMENTO, MANOSCRITTO, CARTA ANTIGÜEDAD, HECHO, VITELA, DOCUMENTO, MANUSCRITO, PAPEL, Rosslyn Castle, New Hampshire, S. S. State of Nebraska, ships, station master, immigrant, American immigrant, New Hampshire politics,

1895-1915 Handwritten Diaries Chronicling Scotland to USA Immigration and the Subsequent Daily Life of a Politically and Religiously Involved Immigrant in New Hampshire, USA