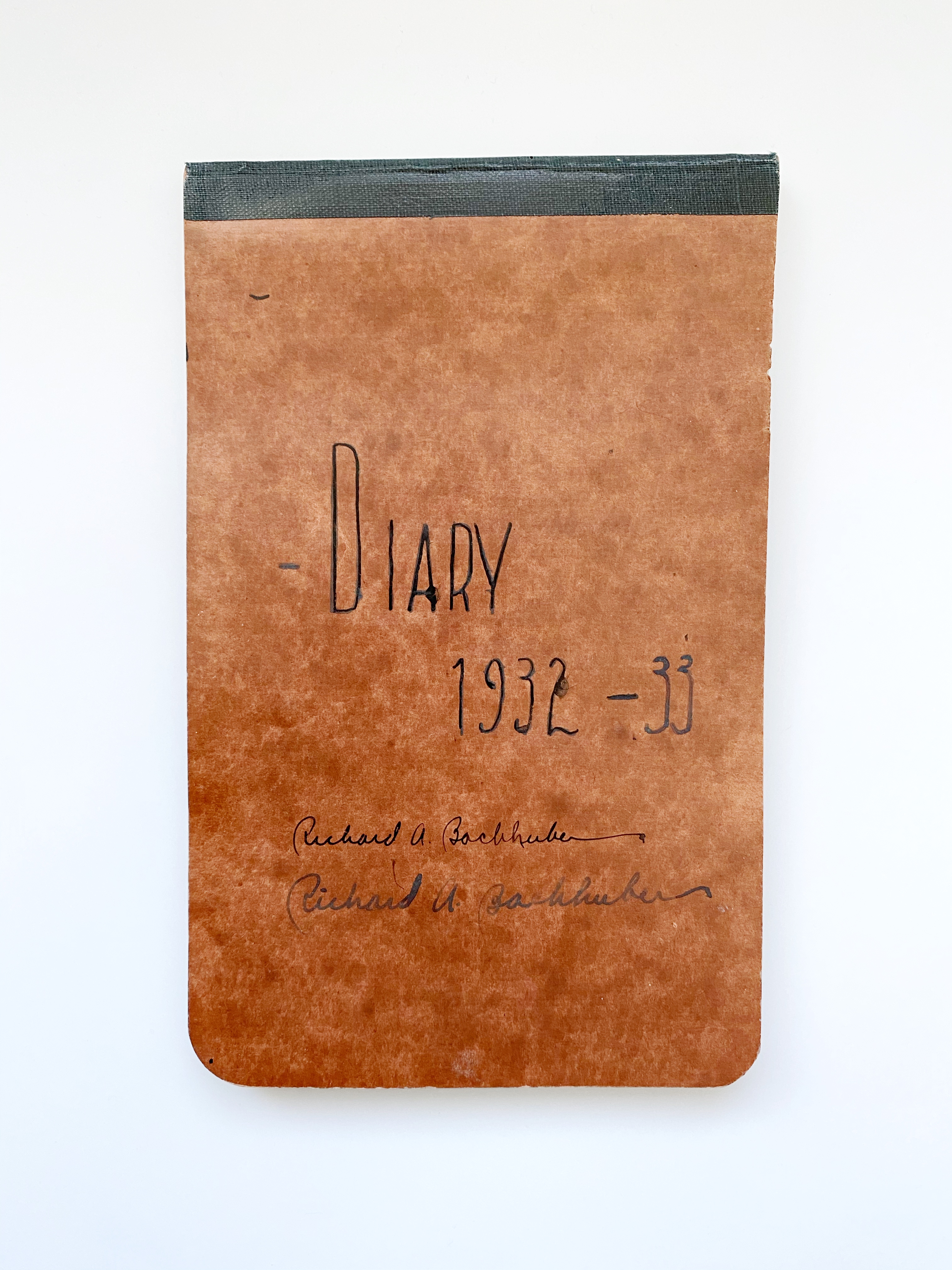 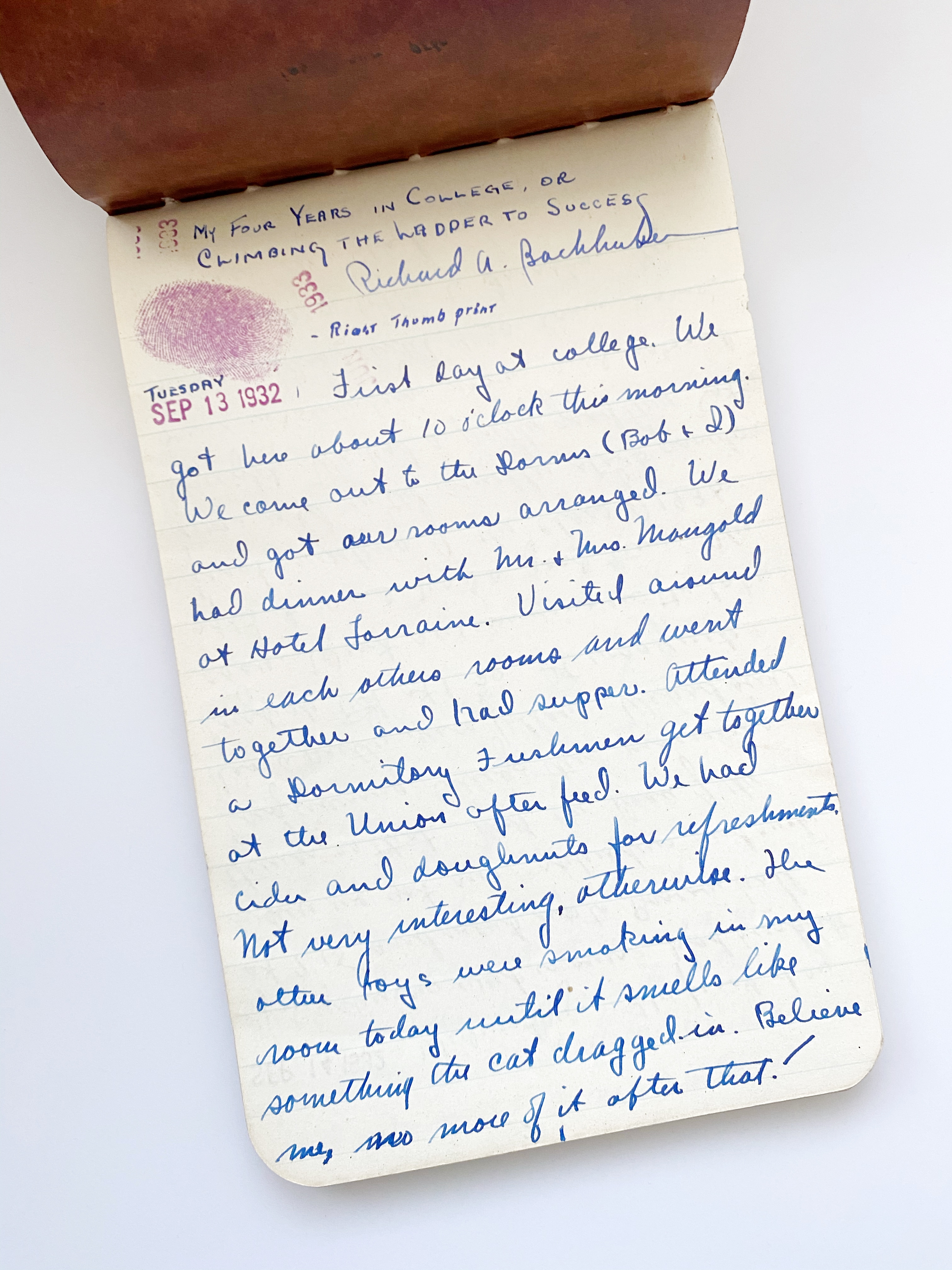 On offer is an excellent description of college life in the American Midwest during the Great Depression. In a notebook titled "Climbing the Ladder of Success," Richard A. Bachhuber, a University of Wisconsin student, chronicles his freshman year from September 1932 to June 1933, giving us a fascinating look at student life during this grim time. Bachhuber writes: "First day at college. We got here about 10 o'clock this morning. We came to the Dorms (Bob & I) and got our rooms arranged. ... Attended a Dormitory Freshman get together at the Union ... We had cider and doughnuts for refreshments. Not very interesting otherwise. " (September 13, 1932). "... Got our Chemistry 6 week tests back and I only got a C+. We had a Math test and as far as I know I got about 65 or 70. I don't know what's wrong. I'll have to do better. Rowed as usual tonight for about an hour. After supper a couple of others and I went over to hear John Chapple talk at the field house. I never heard a speaker more lustily booed." (October 26, 1932) (Chapple was a candidate for the Republican party. His campaign included the claim that the University of Wisconsin was rife with atheism, communism, and immorality.) "Had Regular classes today. Got a test back in chemistry quiz that I got a B+ in. Not bad ... Got into an argument with Guy and Phil over war and its abolishment ... I still think I am right. We shall see." (November 23, 1932) "Started out new semester today. Started learning the code in Signals Corp today. Went up and got my marks. ... I'll have to work harder this semester." (February 6, 1933) Richard A. Bachhuber, a decorated World War II veteran, was born in 1915 in Milwaukee, Wisconsin. In 1932, at the age of seventeen, he entered the University of Wisconsin to study electrical engineering. Upon graduation he took a position as an engineer with Sylvania Electric Company in Pennsylvania, later transferring to Chicago. In World War II he served in the Signals Corps as a communications officer for General Mark Clark, the Allied Commander in the North African and Italian campaigns. After the war, Bachhuber wrote a book called "Travels With An Army, or Generals Don't Get Seasick," which detailed his experiences. Following the war, he returned to Sylvania Electric Company where he finished his career. Sylvania was later bought out by the German conglomerate OSRAM. Bachhuber was very active in his community of Mt. Prospect, Illinois, for most of his life, serving on the Board of Education and Mental Health Commission, among other organizations. Volunteering at a rehabilitation workshop, he used his engineering skills to make fixtures that enabled clients with physical disabilities to operate a drill press and package items. Bachhuber passed away in 1998 at the age of 82. Like many other areas of American life, academia suffered in the Great Depression. Bachhuber entered university at the absolute bottom point of the Depression: 1932. The National Youth Administration's work-relief grants for students made it possible for some to stay in school. This top-bound lined notebook measures 5.0 inches by 8.0 inches. It contains 146 pages and is 100 percent complete. The covers are in good condition as is the binding. The pages are also in good condition and the handwriting is very legible. For a social historian, this diary gives a well-written description of college life during the depths of the Depression. Bachhubers involvement with the college ROTC foreshadows his service in World War II, for which he was decorated.

Title: 1932-1933 Original Manuscript Diary Following the Experience of an American College Freshman During the Great Depression