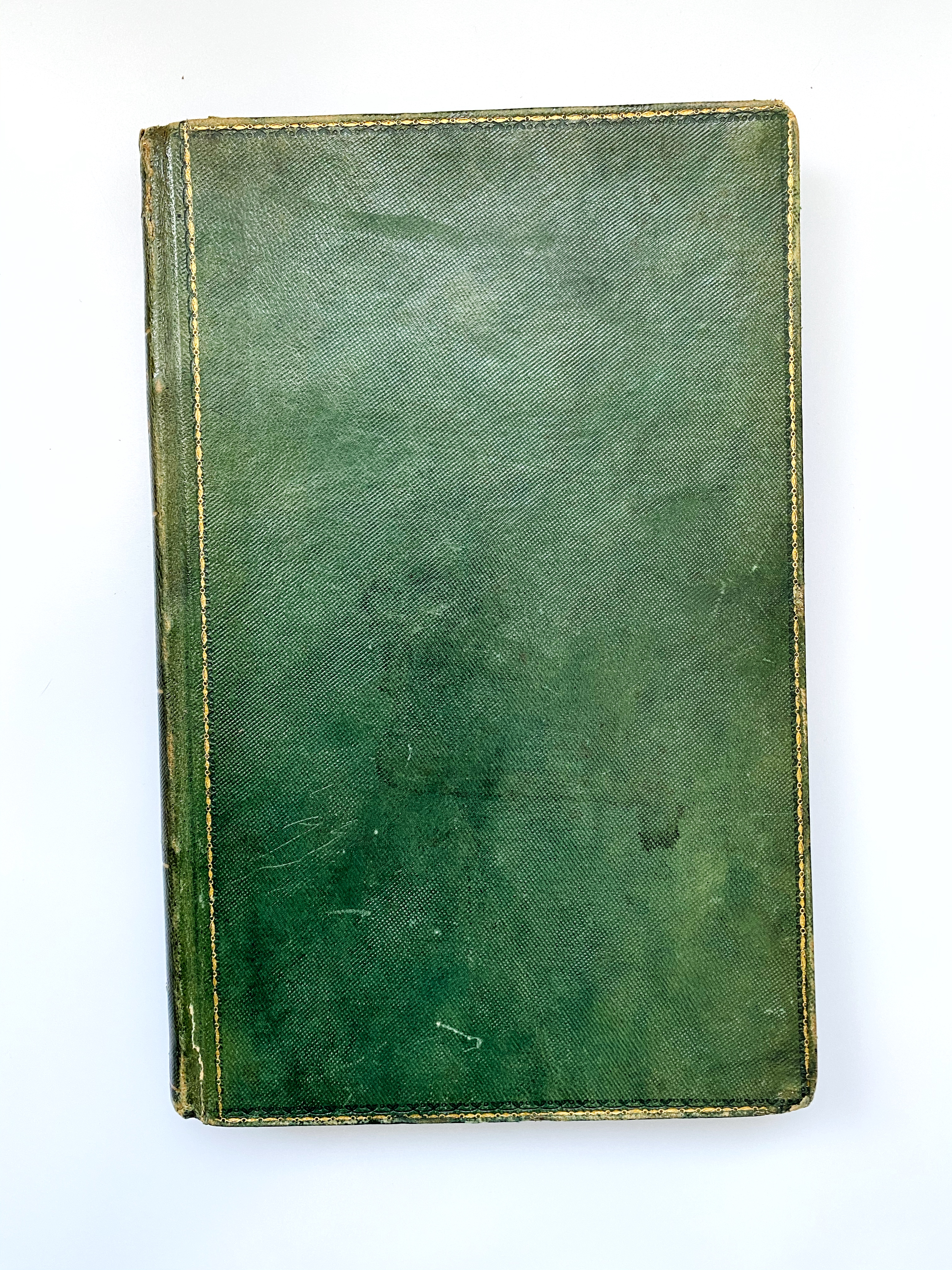 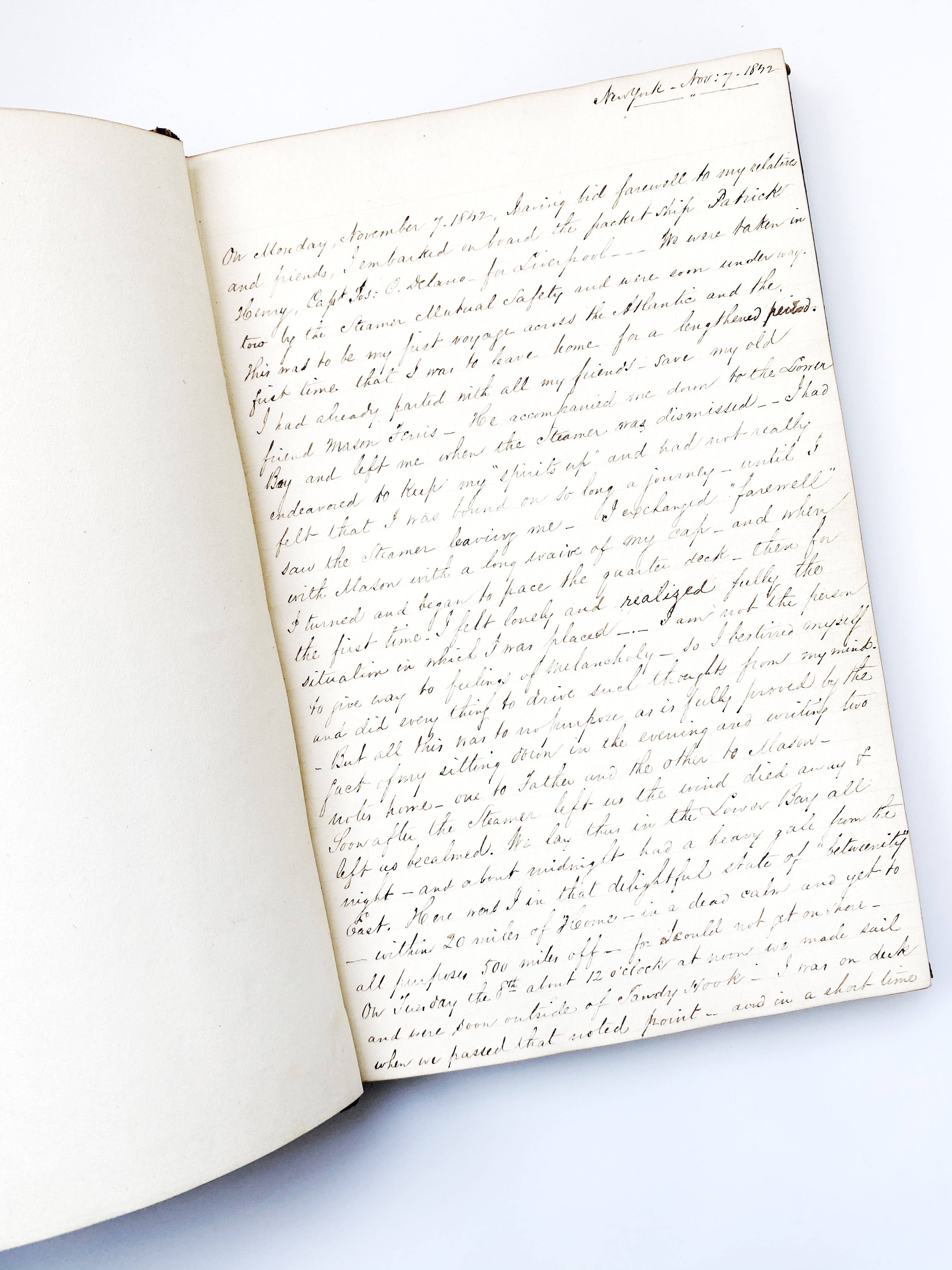 On offer is a superb UK travel diary written in the first half of the 19th century by George W. L. Newton. At the beginning of this well-written 1842-43 journal, Newton sets the scene by chronicling his departure from New York on the packet ship Patrick Henry, captained by Joseph C. Delano. En route to Liverpool, Newton meets his fellow passengers, and describes them with fascinating detail. When the ship docks, Newton sets off to explore. Newtons eye for detail makes the diary entries a pleasure to read. In Manchester, he moves easily from the boom roar of the industrial cotton mills and locomotive shops to the silent beauty of churches: "In one room, the principal business was making screws--we were shown a screw 32 feet long and three or four inches diameter. We were shown in a lower room several of Burches new patent Printing presses for stamping calicoes and laying on 8 colors at one. This is considered a very important invention." (December 9, 1842) He describes a visit to Manchester's Medieval Collegiate Church, saying, "... Behind the table in the Chancel is the 'Goblin Tapestry.' --the subject is 'the death of Ananias and Sapphira.' The stall and the desks in the Chancel are of black oak and are very antique in appearance ...' (December 9, 1842) In the new year Newton travels south by rail. He departs from Leeds, heading south by way of Sheffield and Birmingham, before making his way to Stratford-Upon-Avon: "... Following the directions given me, I soon came to an antique-looking frame house over the door of which was a signboard bearing this inscription: 'The Immortal Shakespeare was born in this house.' I entered forthwith and soon found the old lady who now lives in the house and exhibits it to visitors." (January 20, 1843) Newtons ultimate destination is apparently London, but this journal ends with him at Warwick Castle. If information is scarce about our author, George Newton, that is not the case for the ship or her captain. The packet ship Patrick Henry was a three-masted, square rigged sailing ship. She was famous for her fast passages between the United States and Great Britain. Her home port was New York City and she carried passengers and cargo between New York and Liverpool. She had cabin space for nineteen wealthy passengers and could carry another 300, often Irish immigrants on her westbound trip, in steerage. In addition to passengers, she also carried tons of cargo. Her cabins were luxurious for the day. An article in the New York Herald said that she made 116 round trips and brought 30,000 passengers (most impoverished Irish immigrants) to America. If the ship was famous, so too was her captain, Joseph C. Delano. Delano came from one of the most prominent maritime families in Massachusetts. Delanos uncle was the great grandfather of Franklin Delano Roosevelt, who became President of the United States. Joseph was a highly respected captain who was known for some of the fastest Atlantic crossings in his day. This journal measures 5.5 inches by 8.5 inches and contains 160 pages. Entries are on one side of a leaf only with some overflow, representing about 55 percent of the pages within. The cover is in good condition with some slight wear marks on the edges and corners. The binding is sewn and is intact, although it is loose in some places. All pages are intact. The handwriting is quite legible. For an historian, this is a superb description of life in the newly industrializing Britain nearly two centuries ago. It is well written with a fine attention to detail. For those who collect these types of travel journals from a time long gone, this certainly deserves a place of pride.

Title: Fascinating 1842 Travel Diary Describing One Man's Transatlantic Voyage on a Famous Ship and His Enlightening Tour of England At the End of the Industrial Revolution