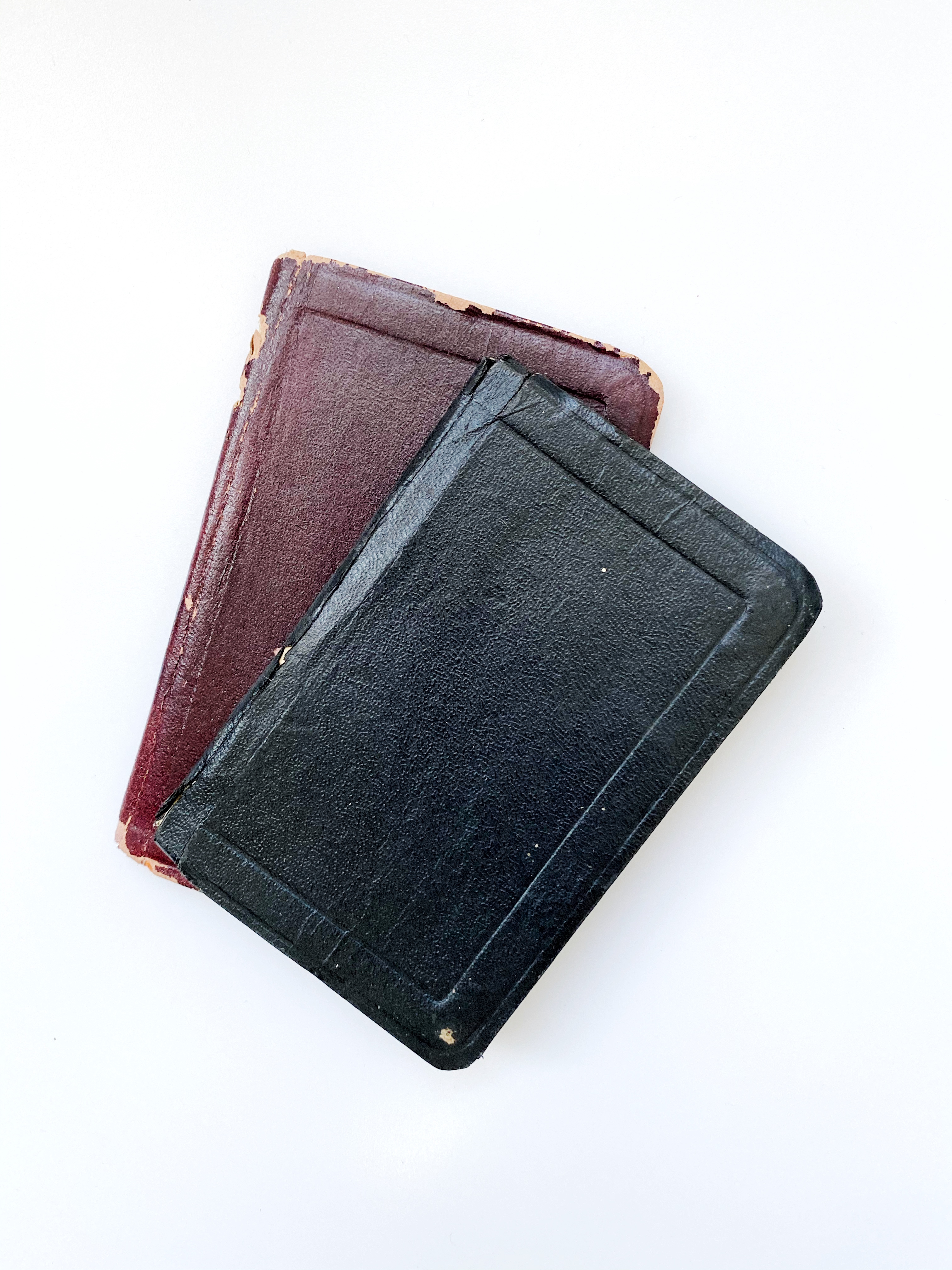 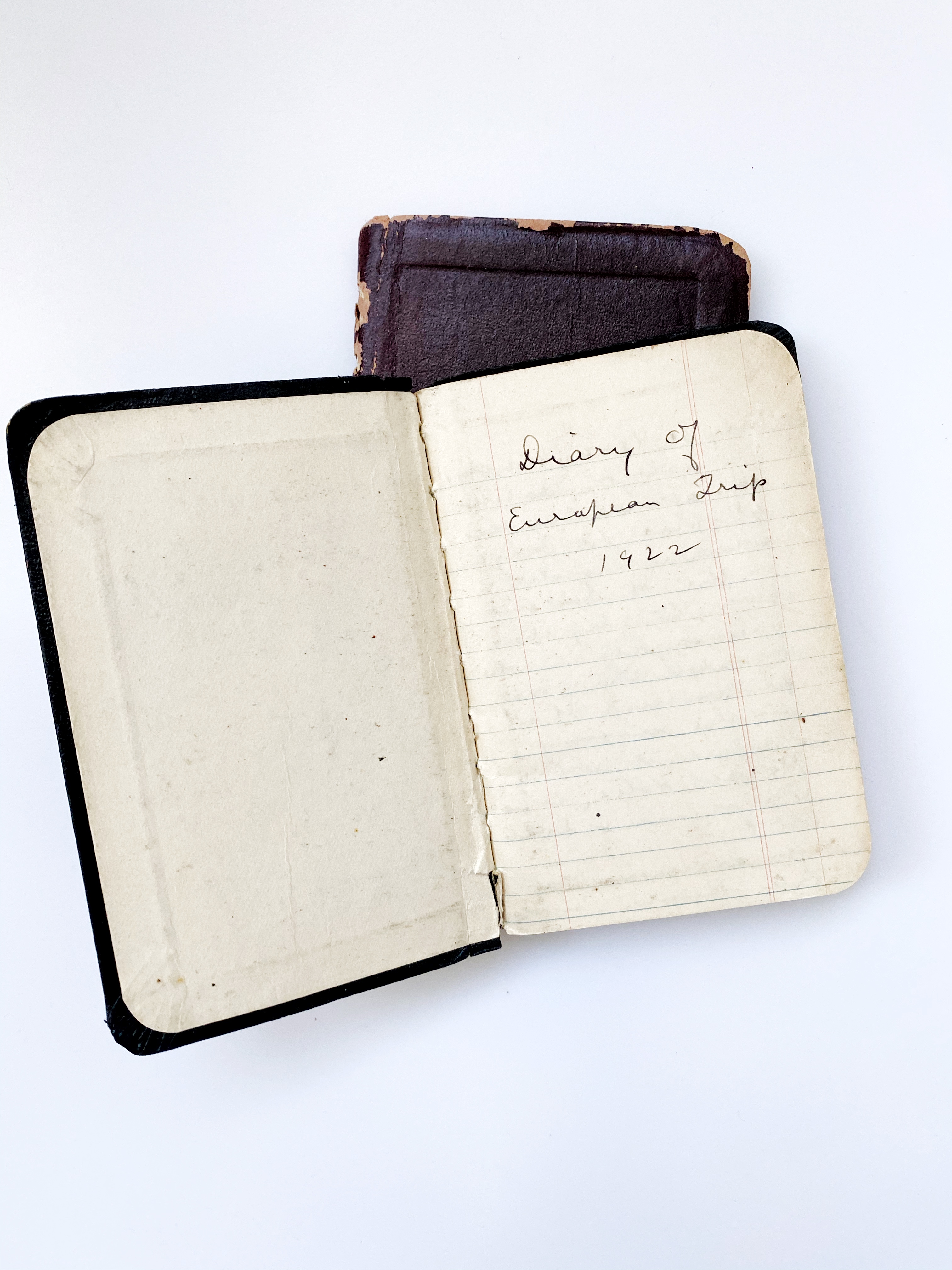 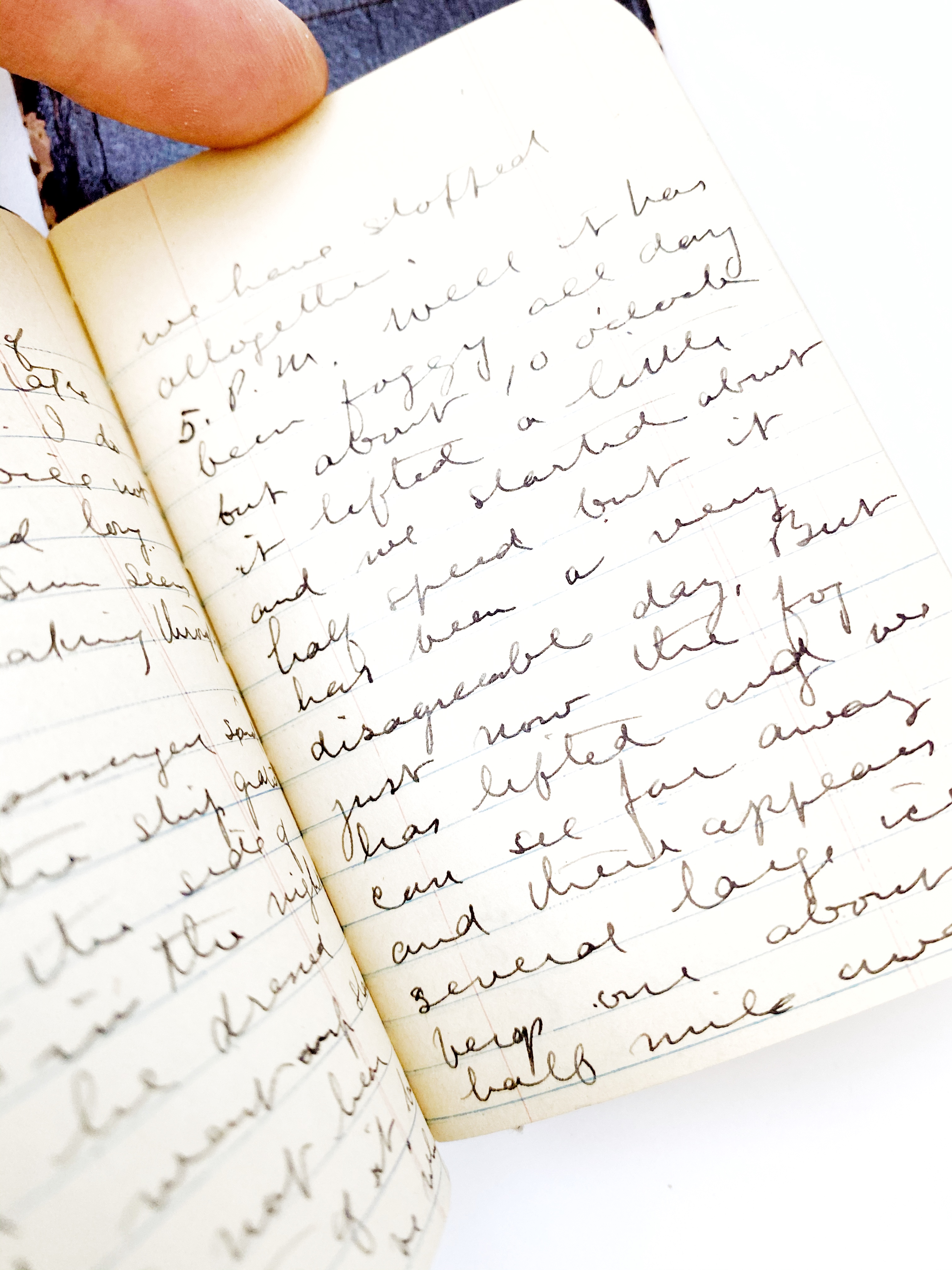 1922 and 1924 PAIR OF ORIGINAL TRAVEL DIARIES TAKING US TO EUROPE AND PANAMA, FEATURING A CHANCE ENCOUNTER WITH A NOTEWORTHY BUSINESSMAN

On offer are two wonderful travel journals written by H. W. Ellis of Watertown, New York. They detail two ocean trips taken immediately following World War I, in 1922 and 1924, and also reference an American businessman who laid the foundation for Newell Brands, a multi-billion-dollar US corporation. Elliss journals are very well written and provide a wealth of small details about his experiences as he travels by ship, first, in 1922, across the Atlantic to England and France, and then, in 1924, south to Panama. On July 21, Ellis left his home in Watertown for a trip to England, where he would be visiting friends, and then on to France. He journeyed down the Saint Lawrence River to Montreal, where he boarded the SS Minnedosa. Minnedosa was a 15,000 ton steam ocean liner, the hull of which was built in Glasgow for the Canadian Pacific Shipping Line. She carried numerous immigrants to Canada and the United States and for a period in the late 1920s was commanded by Captain Ronald Niel Stuart VC, a highly commended Royal Navy captain. Elliss comments on the crossing are detailed and descriptive: "This morning is very foggy and they have shut off all steam and are just drifting, waiting for the fog to rise. You can see quite a way ahead but they say there is a great deal of ice so they take no chances" (August 5, 1922). "This morning is beautiful and clear. The horizon is just a perfect circle all around. . . . I asked the Captain if I could go up on the bridge . . . So I went up and saw all their apparatus, charts, etc. They have the [ ] magnetic compass and another which they call the gyro compass. This is a kind of gyroscope or wheel down in the ship which revolves 15,000 times a minute" (August 8, 1922). The same level of description continues in his accounts of his trips in England and France. "Viola and I went to Birmingham this morning to look around. I bought a velocipede and a wagon for the boys which they seem to enjoy very much" (August 14, 1922). He also has a significant encounter while in Paris: "As I was about to get in the bus, someone said 'How do you do, Mr. Ellis.' It was Mr. Cuthbert of the Newell Manufacturing Co, so we took the bus ride together" (August 20, 1922). In 1912, Lawrence "Ben" Ferguson Cuthbert had been brought in to turn around the struggling Newell Manufacturing Co and its curtain-rod business. Such was his success that he laid the foundation for what became the multi-billion-dollar Newell-Rubbermaid Inc. In 1924, Ellis travelled south to the Panama Canal. According to his journal, he boarded the steamer SS Bretagne on September 10, 1924. Bretagne was a US-flagged refrigerated cargo vessel that plied routes from New York City, through the Panama Canal, to as far south as Valparaiso, Chile. On this run, Ellis travelled as far as Panama City on Bretagne. He would return on the SS Santa Eliza, another freighter sailing the ValparaisoNew York run. As in his earlier journal, Elliss descriptions here are detailed and well written: "I saw two sharks at this point showing their fins and partly jumping out of the water. We could see the lighthouse and some buildings along the shore, also two old shipwrecks" (September 18, 1924). "The grounds around the hotel are beautiful with tropical trees and plants, a row of large Royal palaces and I took some photos . . . I saw by an advertisement that the 'Virginia' the ship which I had intended to take back to NY on Sept 24 was scheduled to sail Oct 6. I immediately called up the Panama and Pacific Line and they said that the Virginia had a collision in San Francisco harbor which would delay her 10 days" (September 22, 1924). The 1922 diary measures 2.5 inches by 4 inches, and is 120 pages long. This diary is 80 percent complete and binding, cover, and pages are in good condition. The 1925 diary is 2.75 inches by 4.25 inches. It is 100 pages long and 44 percent complete. It is in all around good condition. While we dont know much about H. W. Ellis, we do know his family enjoyed local prominence as wealthy entrepreneurs a century ago. John D. Ellis owned and operated J. D. Ellis & Co, a very successful dry goods merchandiser in upstate New York. For an historian, this travel diary provides fine depictions of ocean trips for well-to-do Americans in the Roaring Twenties. The chance meeting with the man who built a multi-billion-dollar corporation adds interest and uniqueness to these entries.

Title: 1922 and 1924 PAIR OF ORIGINAL TRAVEL DIARIES TAKING US TO EUROPE AND PANAMA, FEATURING A CHANCE ENCOUNTER WITH A NOTEWORTHY BUSINESSMAN

1922 and 1924 PAIR OF ORIGINAL TRAVEL DIARIES TAKING US TO EUROPE AND PANAMA, FEATURING A CHANCE ENCOUNTER WITH A NOTEWORTHY BUSINESSMAN