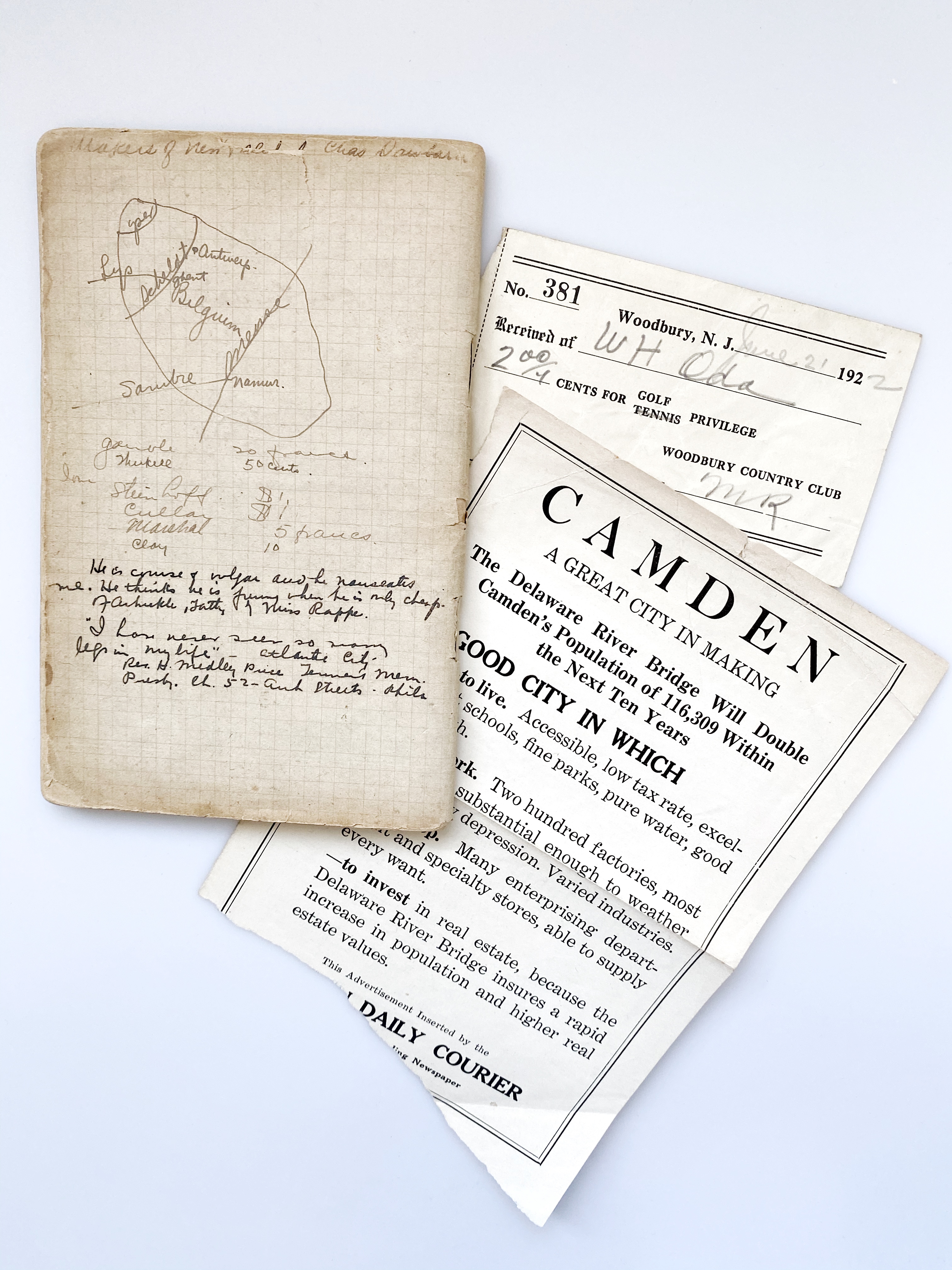 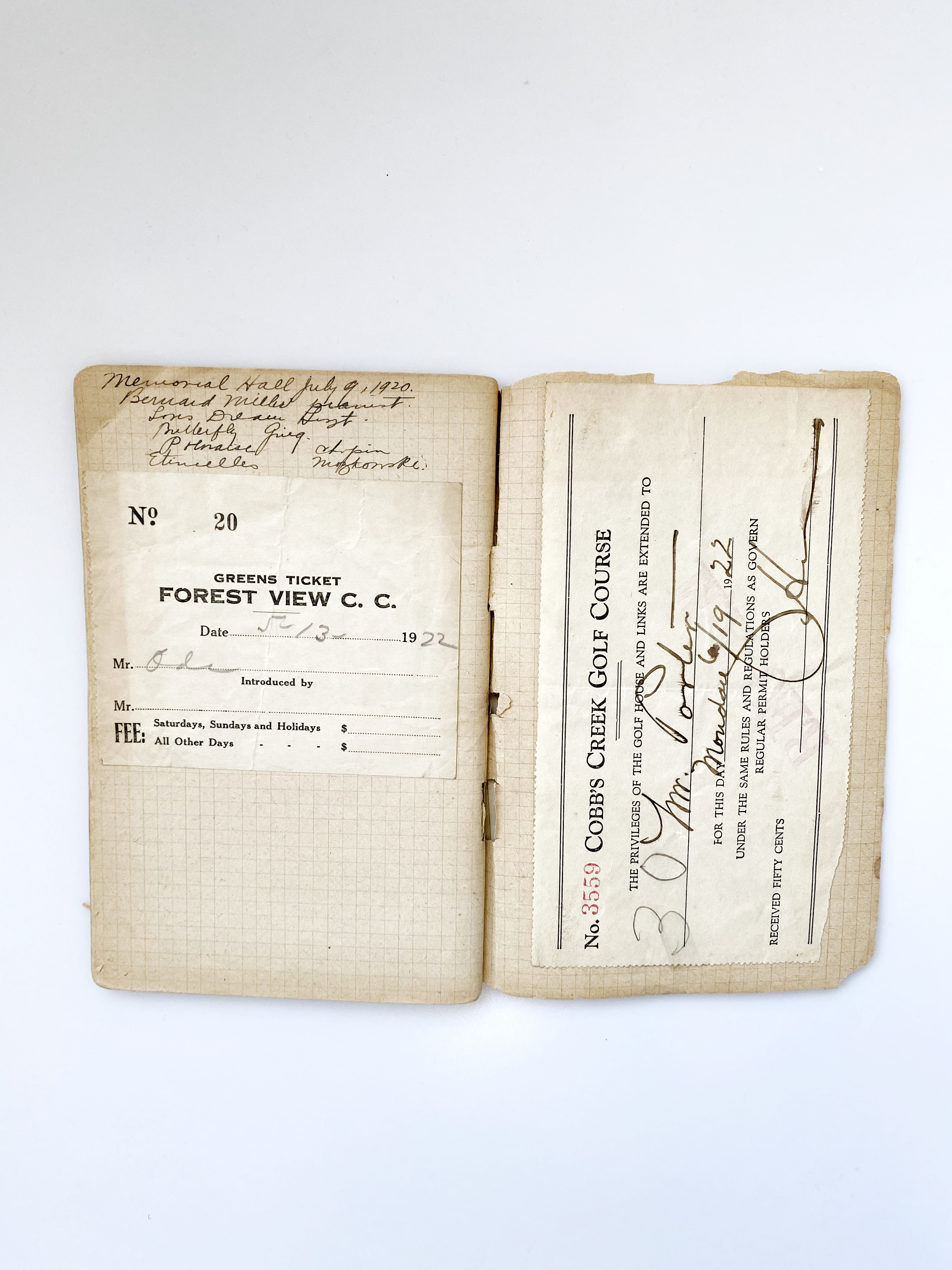 On offer is a fascinating record of an American army officer in France immediately following the end of World War One. The author of this notebook is uncertain. Context does suggest that he is American, as his travels eventually take him to Pontanezen Camp--a huge American base in northwestern France from where American troops were repatriated to the United States. The journal begins with a reference to the nascent League of Nations on page 2: "Great General Council and minor councils, decrees of former, binding and enforced by armies of combined states (only 15 powers) ." The next page bears the first date: February 9, 1919. In this entry, the author details a train trip from Rouen across northern Europe to Vimy Ridge, where he visited military graveyards. He specifically references the 5th, 7th, 14th, 15th, and 16th Canadian Battalions. Vimy Ridge is Canadas most celebrated military victory in WWI. As the author of this diary travels across the countryside, he remarks on enemy troops: "About 4 boxcars on end for German prisoners" (February 11, 1919). He also comments on museums he visited, hotels he stayed at, and the many things he sees as he crosses the country. He enjoys films where he can and operas as well. Throughout March, he details life in and around Pontanezen Camp, and on March 30 he ships out, arriving back in the United States at Boston Harbor on April 7. On May 1, after a wandering train trip, he arrives home in Oberlin, Ohio. Along the way, his notes are full of descriptions of what he sees. Of interest is his reference to the so-called "Red Scare" that was sweeping the United States at the time. The Red Scare was a period in the post-WWI United States marked by perceived fear of radical far-left extremists and communist revolution. This contributed to the wave of white supremacist terrorism and race riots that swept across the United States in early to mid 1919. Hundreds of thousands of returning veterans were dumped into a non-existent labour market amid rising fears of Bolshevism. Our author writes: "At public square hundreds and thousands of reds . . ." (May 1, 1919). On June 2 he registered for college, with context suggesting Temple University in Philadelphia. The balance of the journal is a detailed description of the authors academic and social life, with a heavy emphasis on the latter. His journal ends on June 22, 1922. Measuring 4.25 inches by 6.75 inches, this small notebook resembles the type of field message notebook that officers carried. The pages are marked in a light grid pattern. There are 94 pages and the notebook is 95 percent complete. The covers are missing, but the stapled binding is in good condition. The pages are in good condition and the handwriting is legible. The entries do not follow a strict daily entry system, as the author skips days from time to time. For a military historian, the authors travels across war-torn France and Belgium provide wonderful detail about the conditions in the months immediately following the war. For a social historian, his observations as he travels in Europe and across eastern United States offer an excellent window into this time of tremendous social upheaval in post-WWI America.

Title: 1919 to 1922 ORIGINAL HANDWRITTEN DIARY OF AN AMERICAN WWI SOLDIER RETURNING HOME TO A COUNTRY IN UPHEAVAL AMID FEARS OF COMMUNIST REVOLUTION