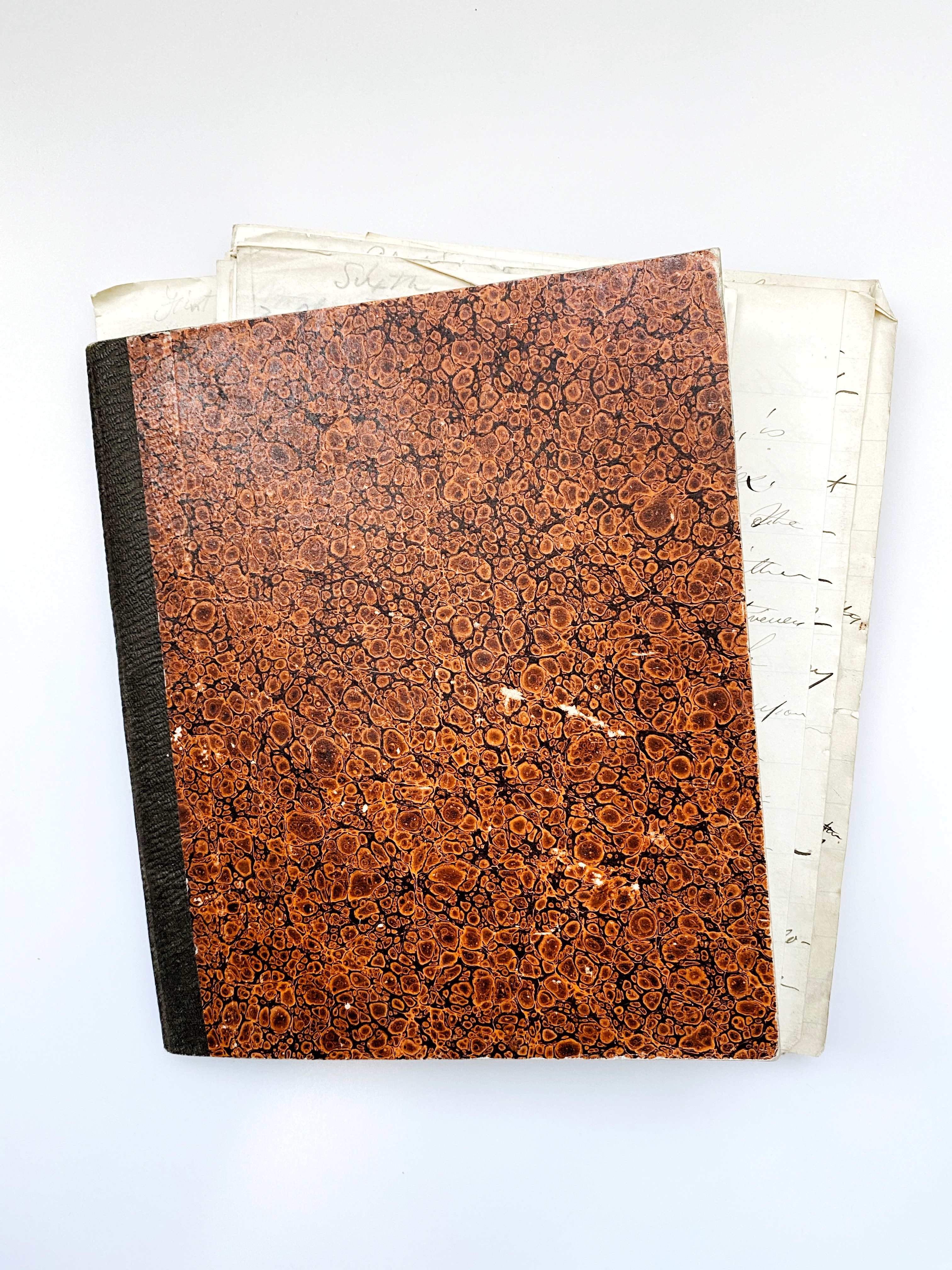 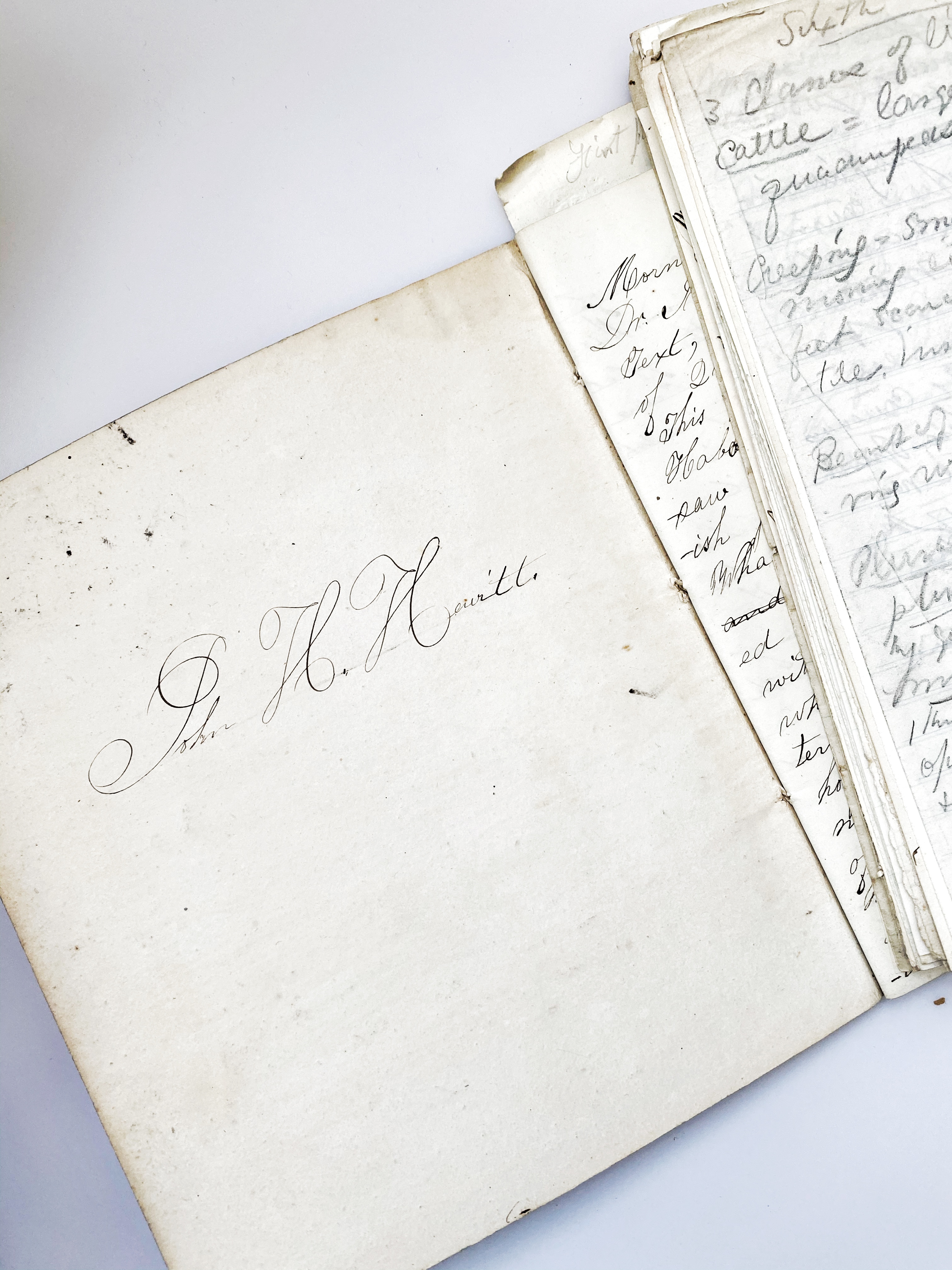 On offer is a terrific collection of early writings from John Haskell Hewitt, a leading early American classical scholar. This 1855 journal is a series of reflections on sermons and lectures that Hewitt attended as a student at Yale University: "The theme was the duties of life in relation to divine providence. The speaker divided the subject into 3 general heads. 1st What is understood by Providence. Secondly Duty of Consenting to that Providence. Thirdly Duty of Submitting to that Providence" (pp. 18-19). "There are in every science certain rudiments of first principles on which all others depend and from which others proceed. In every concern it is well to keep in view the rudiments. In the Legislature, the Constitution, is looked to, in Navigation, the compass. The same is true in Religion. There are certain fundamental principles in this, which must be regards" (pp. 28-29). His loose-leaf notes date at least until the late 1870s. Some are on the letterhead of Olivet College, showing him as Acting President, which date then to 1877 at the earliest, when he was so appointed. They cover a wide range of subjects. Many appear to be notes for talks or lectures. "A History as has been shown is philosophy teaching by example ... First Colonial Congress in NY, Oct 7, 1765, 9 Colonies, 28 delegates, Agreed on Declaration of Rights." One group of notes has a page dedicated to each of several American states, many referring to the early history of the relevant state, especially vis-a-vis independence. Hewitt was born in 1835. He entered Yale University in 1855, the year this journal was kept. After his graduation, Hewitt stayed at Yale, serving as a librarian there. In 1865 he accepted a teaching position in Olivet College in Michigan. In 1882, the president of Williams College in Massachusetts (and a friend of Hewitts from Yale) , Franklin Carter, offered Hewitt a prestigious professorship in ancient languages. Hewitt accepted, serving Williams College in various capacities for the rest of his life. He became Professor Emeritus in 1909. He passed away in 1920 at the age of 85. This small notebook measures 6.25 inches by 7.5 inches and contains 50 pages. It is about 90 percent complete. The cover is in good condition, as are the binding and pages. The handwriting is legible. Accompanying this notebook is a collection of some 108 pages of loose-leaf notes. For an historian, this is an outstanding look into the thinking and writing of a man recognized as a leading scholar in 19th century America. For alumni of these great institutions, this would be an excellent addition to or anchor for a collection of memorabilia. ; Manuscripts; 6.25" x 7.5"; 50 pages; John haskell hewitt; yale university; yale; history of yale; olivet college; williams college; american scholar; americana; handwritten; manuscript; document; letter; autograph; writer; hand written; documents; signed; letters; manuscripts; diary; diaries; journals; personal history; social history; historical; holograph; writers; autographs; personal; memoir; memorial; antiquit, contrat; vlin; document; manuscrit; papier antike; brief; pergament; dokument; manuskript; papier oggetto d'antiquariato; atto; velina; documento; manoscritto; carta antigedad; hecho; vitela; documento; manuscrito; papel