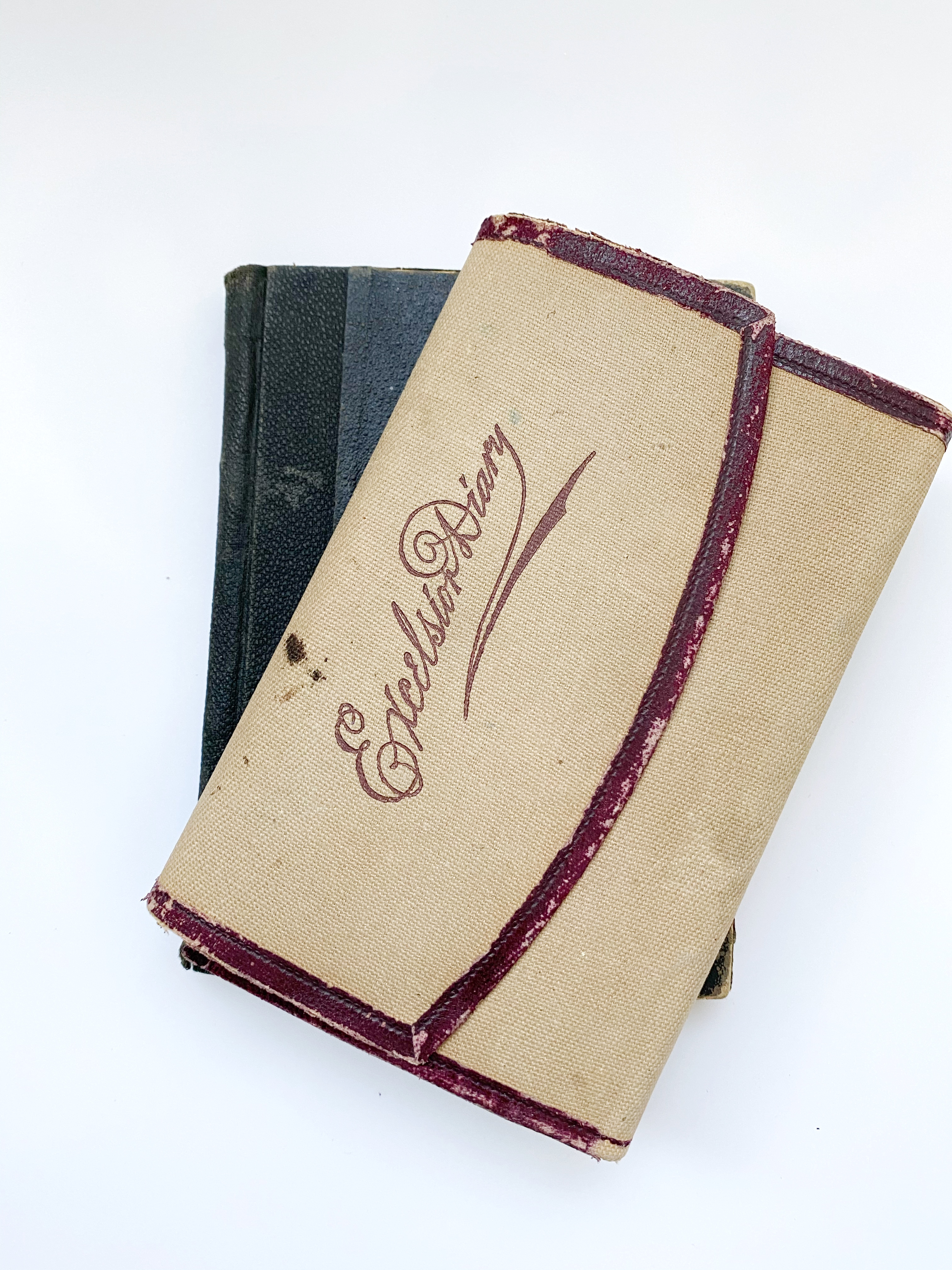 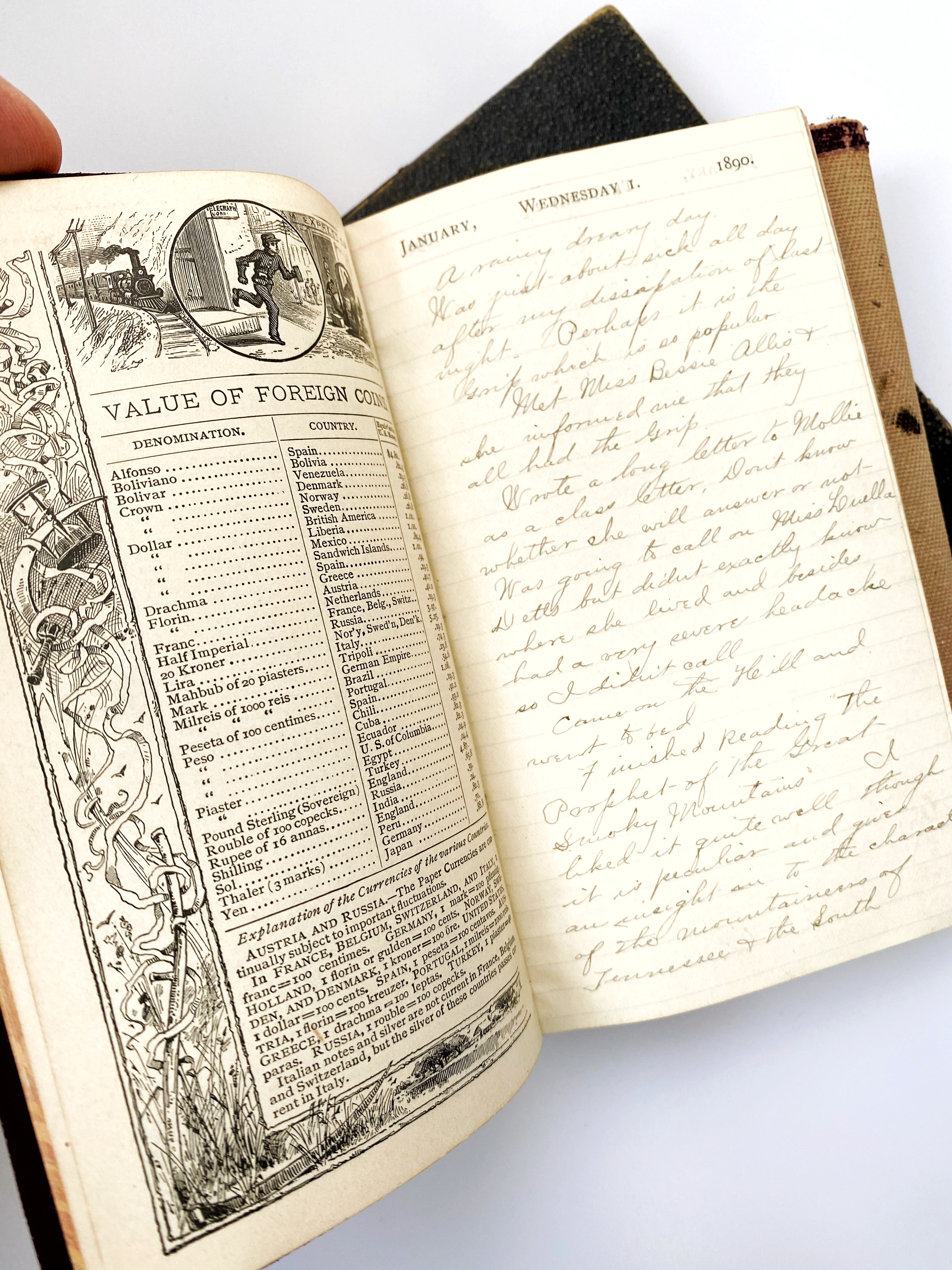 On offer are two diaries written by John Courtney Hurspool, a young lawyer at the beginning of his career in the late 19th century American West. Hurspool was born in Ostego, Michigan, in 1868. He studied law at the University of Michigan, graduating in 1892. Upon graduation, he moved west to Walla Walla, Washington where he established a successful law practice and lived the remainder of his life. He passed away in 1951 at the age of 82. The first diary covers the year 1890. In it, Hurspool describes his life as a student and the many things that occupy his time. His entries are long and detailed: "Went to regular recitations. Biblical (Galatians) Dr. Knox, Blackstone Dr March and Geology to Dr. Porter. We have a very large Geology class over sixty four fellows in it . . . Studied Blackstone before supper. Liked it. After supper studied Political Economy" (January 13, 1890). "In the evening I dressed up and called on Sally Midhaugh per agreement of last evening I had a very pleasant time til Fred came when he sort of spoiled everything" (April 24, 1890). "Was downtown most of the afternoon. Had quite an exciting time when the pony belonging to the Indian Doctor, who is humbugging the town, got loose and ran down the street striking Edsell's buggy overturning it. That scared Edsell's horse which broke loose and ran away dragging the buggy bottom side up. It kicked loose soon and then was stopped" (September 8, 1890). This diary contains very extensive expense records and address lists. There are ephemera in a pocket of the diary consisting of, among other items, a rent receipt, some ticket stubs, and a list of women's names. It measures 3.5 inches by 5.75 inches, contains 365 pages, and is 95 percent complete. The cover, binding, and pages are all in good condition. The second diary in this collection begins in October 1891 and continues through January 22nd, 1893. As in the first diary, he keeps detailed notes of his daily experiences: "Went to quiz on Fixtures and Easements and made [ ]. Rather guess I have 'passed upon the record.' Attended Thompsons lecture but didn't go in the afternoon although he started a new topic Equity Pleading and Practice. Instead, I wrote on my thesis" (December 4, 1891). "Spent most of the day at the courthouse hearing the Riot Case. Was up to the state capitol to see the Legislators balloting for a U. S. Senator. It is still a deadlock" (January 18, 1893). The lined notebook measures 4.25 inches by 5.75 inches, contains 180 pages, and is 100 percent complete. All aspects of the notebook are in good condition. For an historian or legal educator, these two diaries offer an excellent look at what was considered at the time a solid legal education. Indirectly, it also points to the type of economy and society that existed in the United States at that time.

Title: 1890 and 1892 Original Handwritten Diaries by a Lively Michigan Law Student Beginning His Career At the Close of the Nineteenth Century